An echoing hall crisscrossed with desks and chairs. Dozens of people are filing in, swirling around me in soft focus. What is this?

I sit down at one of the desks. There is a booklet marked: Examination VCE English. 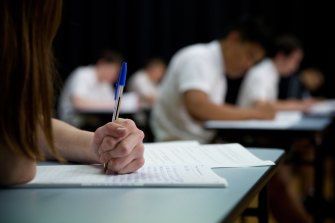 I haven’t been to class, I haven’t read –

The room tilts at a crazy angle. Words float off the page: “Parenthood is a central theme of Euripides’ play Medea. Discuss.”

Then the soothing voice of consciousness: “Relax; it’s just one of those nightmares.”

More than 30 years after the fact my VCE nightmare recurs with reliable frequency, especially lately. Because my daughter is in Year 12. No, scrap that. My daughter is in her bedroom.

Only this morning, Monday morning, my daughter is gifted the master bedroom – prime real estate! – so she can complete her English SAC on the desktop computer. The “school-assessed coursework” is a task that counts towards final results – although precisely how, I can’t tell you, because the system is opaque and mystifying even for the teachers.

“Now I’m going to be putting the essay prompt up on the screen,” I hear the teacher say, “if any of you have technical problems this morning just get mum or dad to send a note.”

I think about children in large families who have no room or even a desk of their own, limited devices, mums and dads with no English. I think about strung-out teachers home-schooling their own children as they remotely school others.

I suspect my daughter’s generation will have a new genre of archetypal nightmare. The bedroom exam. The virtual graduation. The screen freezing at pivotal moments – now there’s a metaphor for COVID’s assault on the lives of the young.

For my part, I prattle on – unhelpfully – about how “complex” her VCE texts are; how intertextual and postmodern. The students are told they must grasp “meta-language”. It’s frequently noted that Victoria’s prescribed VCE texts make limited concessions to levity, or even antiquity.

Overall, the themes are bleakly contemporary: institutional racism, Islamic fundamentalism, even a pandemic. The sci-fi novel Station Eleven is about a pandemic so devastating civilisation collapses, which at least puts our present nightmare into perspective. And it’s actually one of the lighter texts on offer.

In July, NSW Health Minister Brad Hazzard said vaccine supplies were so low people were “chasing” jabs like characters in The Hunger Games, which depict a dystopia in which contestants must compete in a televised fight to the death. 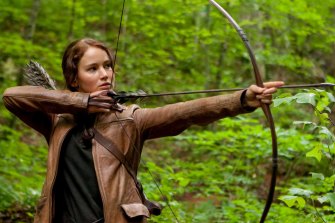 After what felt like an eternity of Scott Morrison announcing the imminent arrival of more Pfizer – the boxes seemingly always on the next ship – young people can finally secure a spot in the vaccine queue.

But we’re not yet clear of The Hunger Games, certainly not in Victoria. The week before last, the Andrews government announced 450,000 first-dose Pfizer vaccines would become available for 16 to 39-year-olds at state vaccination hubs. The day bookings opened I was online at 7am, desperate to get my daughter sorted. No chance: the website was getting 50,000 hits a minute.

I tried the phone number. Over and over. A voice recording told me the line was congested due to the huge number of calls. Turns out I was one of 1.3 million people trying to get through.

After three days of hub-hopping, and almost a whole day of queuing, we got lucky at a local community centre. 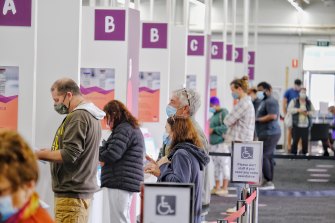 This week the state government opened a “priority” vaccination hotline for Year 12s and teachers.Credit:Luis Ascui

This week the state government opened a “priority” vaccination hotline for Year 12s and teachers, who are being told they must get jabbed by October 5 when students will sit the General Achievement Test, the purpose and function of which is, of course, opaque and mystifying. Naturally, the line jammed within the first half hour.

Nor does it come as a surprise that some schools are making use of a network of GP parents to secure priority bookings. We’ve become largely desensitised to the neo-liberal mindset of “me first”.

If there is indeed sufficient Pfizer for all Year 12s then why can’t authorities distribute doses through schools in an orderly and equitable way?

We might ask more generally: when will young people move to the front of the policy queue? 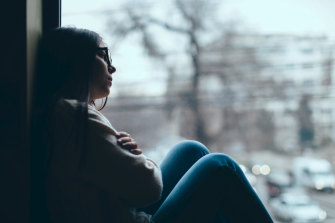 Profound chapters of our young people’s lives are closing without ceremony.Credit:iStock

Our kids and young people are living a simulacrum of a life, in which profound chapters close without ceremony.

Last year I foolishly assured my daughter she’d have a normal Year 12, “one of the best years of your life”, I said, memories flooding in. A barbecue on the Yarra, a rock concert on the green, study sessions at a friend’s house where we did more unhinged laughing than studying, and the awful, humiliating moments that now seem vivid with poignancy.

No doubt last year’s Year 12 were daring to anticipate first year uni, the first of life’s “best years”. Instead, thousands of students will complete their degrees while barely setting foot on campus.

The calamity has been largely out of our leaders’ control, so while I’ve been sceptical about the case for blanket school closures at various points in this pandemic, I’m not about to rehearse those arguments or badger the Andrews government to reveal its plans for Term 4.

But I want our leaders to see themselves in loco parentis. I want them to start thinking big, really big, about how, come the COVID-normal future, we might compensate our young people for lost time and opportunities, for sacrificed joy.

Julie Szego is a regular columnist.