A HOUSE burst into flames after being struck by a lightning bolt yesterday.

Five engines with around 25 firefighters raced out to battle the blaze in Haxby, North Yorkshire after being called out at around 8.15pm. 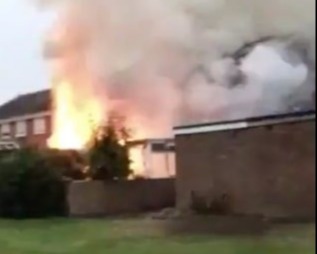 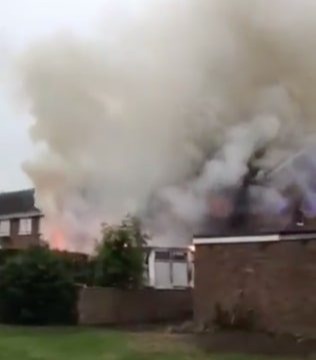 Crews used 10 breathing apparatus and four horsereel jets among other equipment in a two-hour battle to control the flames.

Cops, who were also on the scene, said no one was injured after everybody safely evacuated.

But the house was destroyed and pictures of the grim aftermath, sent to York Press, showed the roof had completely caved in.

Video footage also showed the house up in flames and engulfed in smoke as firefighters worked tirelessly to put it out.

An eyewitness driving home told the local paper:  "I was driving through Earswick back from Monks Cross and I saw loads of black smoke coming from Haxby.

"I knew straight away it was a house on fire so I drove there and found it was down Garths End. I was one of the first to arrive before the emergency services."

A North Yorkshire Fire Service spokesperson said: "Five crews from Huntington, York and Acomb have dealt with a fire to a domestic property following a lightning strike.

Residents with cars parked on the street were told to urgently drive it away to allow emergency crews to put the fire out.

North Yorkshire Police posted to Twitter last night: "@NYorksPolice and @NorthYorksFire are currently in attendance at a property in #Haxby which has been struck by lightning.

"No injuries are reported and the property has been evacuated. Local residents are advised to stay clear of the area to allow emergency services to deal."

It came as Yorkshire was battered by thunder and lightning storms.

A yellow weather warning was issued by the Met Office for thunderstorms expected to hit the area from 4pm yesterday.

Forecasters even predicted there could be "damage to buildings or structures" as the scorching 33C heat took a downward turn.