A controversial hotelier dubbed ‘Goldfinger’ is raking in up to £60,000 a month housing migrants.

Abid Gulzar has handed over his 45-room country house hotel near Eastbourne to accommodate up to 100 migrants.

The Indian-born 78-year-old, who owns three gold Teslas and wears large gold rings, stands to make more than £700,000 of taxpayers’ money a year housing migrants. And he says both his other hotels – the Mansion Lions and Albany Lions in Eastbourne – are also up for grabs if the Government wants them.

The Home Office policy of housing migrants in hotels at huge cost to the public purse has caused fury. 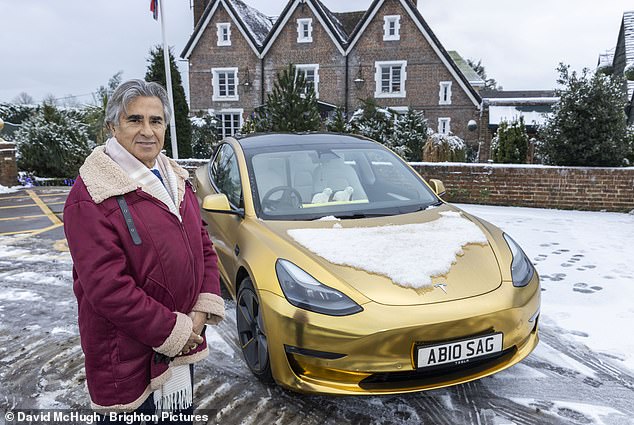 Abid Gulzar, 78, can house up to 100 migrants in his Eastbourne country house. He is set to make over £700,000 of taxpayers’ money a year housing migrants

In the last six weeks up to 100 migrants have been placed in Mr Gulzar’s Boship Hotel. He said: ‘The hotel trade is really suffering… what else are we supposed to do? No one is coming to stay any more.’

In 2019 his businesses, Mansion Lions Hotel Ltd and Albany Lions Hotel Ltd, were fined £4,000 each for failing to pay tax contributions. And in 2013 he was fined £45,000, with £90,000 in costs, after being found guilty of damaging a protected conservation site in Pevensey.

He added: ‘The Boships was closed for two years during Covid and now we have a recession. No-one has any money to spend.

‘I’d only recently reopened Boships and when the Government came knocking we had to refund some people who had bookings.’

He said his staff had placed two single beds in each of the 45 rooms to accommodate two migrants per room.

He said: ‘They are mostly men but there are a few women who have travelled over from France.

‘We have to feed them three meals a day and look after them. I also have to heat the hotel though they have complained it isn’t hot enough.’

He said he was being paid around £15,000 a week to accommodate them but had no idea how long the contract might last.