New York: The number of COVID-19 patients being treated in hospitals across the United States has reached 90,000 after nearly doubling in the past month, just as holiday gatherings are expected to propel the next wave of infections.

The rate of hospitalisations – now at the highest level since the pandemic began – has pushed some hospitals beyond capacity, and comes after weeks of rising infection rates across the country. That is likely to increase as people who mingled with relatives and friends over Thanksgiving on Thursday gradually get sick, health experts say. 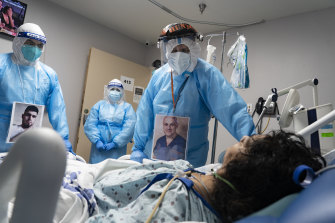 Medical staff wear their photos outside their PPE in COVID ICU at a hospital in Texas. Credit:Bloomberg

Many health experts and politicians pleaded with Americans to refrain from gathering for their traditional communal Thanksgiving feasts this year, warning that socialising between households would accelerate the rate of community transmission and push an already strained healthcare system to the brink.

Some abided by the public health guidance, spending their Thanksgiving seeing their family over video calls. But others chose to travel anyway.

On the day before Thanksgiving, typically one of the busiest travel days of the year in the United States, more than 1.07 million people transited through US airports – the most of any single day since the start of the pandemic, according to the Transportation Security Administration.

Nearly 6 million Americans travelled by air from Friday to Wednesday, it said, a number that is however less than half that of the same period last year.

State governors have also urged Americans to stay home on Black Friday, a traditionally busy holiday shopping day, encouraging them instead to take advantage of online deals and support business that have suffered during the pandemic-related economic downturn.

"Remember, skip the crowds and shop from home this Black Friday. Our local shops have curb-side pickup options and need our support," Kentucky Governor Andy Beshear wrote in a tweet on Friday.

In an effort to mitigate the winter COVID-19 wave, more than 20 states have issued new restrictions, including mask mandates and limiting capacity of bars, restaurants and houses of worship.

The US Supreme Court ruled against New York Governor Andrew Cuomo’s restrictions on religious gatherings on Wednesday, voting 5-4 late in favour of requests by a Roman Catholic Diocese and two Orthodox Jewish congregations for an injunction to block the capacity restrictions from being enforced.

Earlier this week, Washington Mayor Muriel Bowser said the latest COVID-19 restrictions on gatherings in the nation's capital also applied to indoor religious services, reducing capacity from 100 people to 50 people, with a maximum 50 per cent. It was not immediately clear if the curbs would be challenged following the Supreme Court ruling.