Horrifying moment black transgender woman is put in a spit hood during her arrest before later dying in the back of an ambulance: Police waited two weeks to report the incident

Dallas police are under investigation for the death of a black, transgender woman who died in the back of an ambulance after cops arrested her and put her in a spit hood.

Shocking bodycam footage from the arrest show police approach LaDamonyon Dewayne Hall, 47, on 26 May after getting calls that she might be intoxicated in public.

Hall initially appeared scared and confused as she cooperates with police and begins to cry, but then she became agitated.

She started taking off her clothes and falls over as officers proceeded to pin her to the ground and arrest her.

Officers place a spit hood on Hall, a device used to prevent someone from biting or spitting at a cop, as she’s loaded into the ambulance but appears to be struggling for air.

It took nearly two weeks for the department to report Hall’s death, the cause of which has yet to be determined.

Scroll down for video: 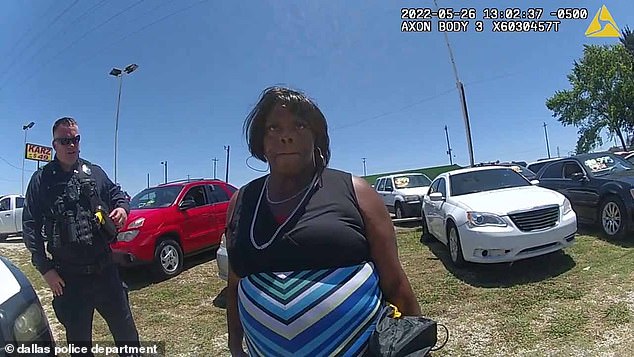 LaDamonyon Dewayne Hall, 47,  (pictured) died on May 26 after police arrested her, put a spit hood over her head, and load her into an ambulance as she screamed at them 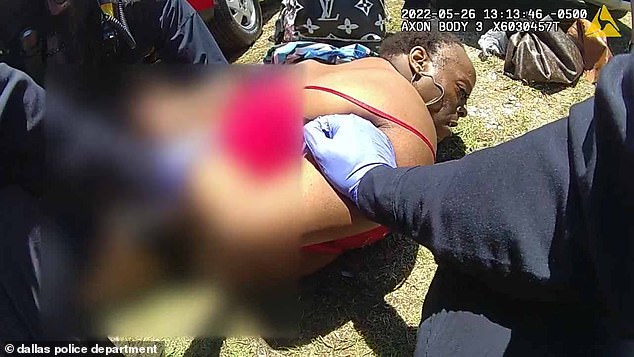 Hall, a transgender woman, took off her wig and was stripping when police arrested her. They believed she was under the influence of drugs or alcohol

Deputy Chief Terrance Rhodes said the case was under review by the Dallas Police Special Investigation Unit. Police are still waiting for a toxicology report.

When asked by Dallas Morning News as to why it took 13 days to report the death, police spokeswoman Kristin Lowman said the department needed time to show the footage to Hall’s family and interview them.

According to the department’s general guidelines, the bodycam footage should have been released within 72 hours of the incident, but Lowman said the time can be extended ‘at the discretion of the police chief and notification of the police oversight committee.’

The Dallas Police Department did not immediately respond to DailyMail.com’s request for comment.

Hall appears dazed and confused as the officers question her about 911 calls they received about someone walking around Garland Road who appeared under the influence of drugs or alcohol.

The officers ask if she needs an ambulance, and she shakes her head no, but appears to say yes. She goes on to lie face down on the ground as three Fire Rescue officials appear. 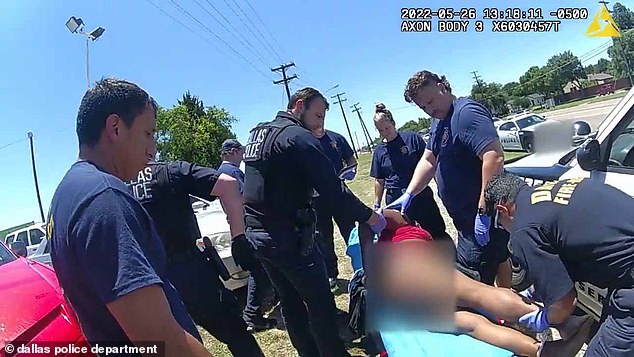 Officers had arrested Hall after she suddenly began to strip in front of them. They arrested her and loaded her into an ambulance 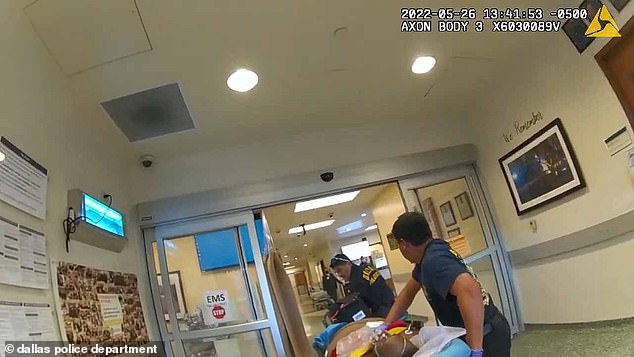 The emergency officials rushed Hall into the Baylor University Medical Center’s emergency room, where she was pronounced dead at 2:05 p.m.

When Hall starts crying and says that she’ll be killed, one of the emergency officials asks her to calm down.

‘No, we’re not going to let anyone kill you,’ the official tells her. ‘We want to check you out. Can we take you to the hospital?’

Hall then begins to yell unintelligibly at the cops and emergency officers, and tries to strip, leading officers to push her to the ground and arrest her.

‘You don’t touch me, you goddamn motherf***ers… what did I ever do to you,’ Hall screams at the officers who wait for paramedics to arrive.

They place a spit hood on her as she’s loaded in an ambulance, with the officers outside appearing to laugh and joke about the situation.

Hall continues to scream inside the ambulance as a paramedic and officer tried to calm her down.

‘Calm down before we get to the hospital so they don’t have to tie you back up like that,’ the officer says. ‘Try to breath, ok.’

At about 1:34 p.m., the paramedic and officer notice that Hall has fallen silent.

‘Sir can you talk to me,’ the officer asks, addressing her as a man.

Seeing that she’s unresponsive, they remove the spit hood, and the paramedic starts performing chest compressions as they arrive at Baylor University Medical Center.

After being taken into the emergency room, Hall was pronounced dead at 2:05 p.m.