Hong Kong: Hong Kong’s stocks are already rebounding at the fastest pace in the world, and a possible visit by Chinese President Xi Jinping in a few weeks may provide even more buying momentum.

Signs are growing that Xi will join a July 1 ceremony to swear in new leader John Lee as well as celebrate 25 years of Chinese rule following the handover from Britain in 1997.

The South China Morning Post reported this week that Hong Kong is preparing to isolate some 1000 people involved in the city’s handover anniversary anticipating Xi’s arrival, including Lee and current leader Carrie Lam. A Hong Kong school is asking some students to undergo a week-long hotel quarantine prior to greeting dignitaries. 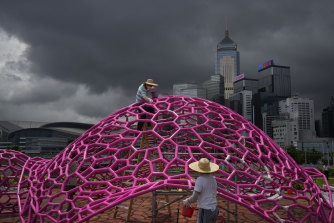 Workers wearing face masks paint an art installation in a Hong Kong park ahead of celebrations of the 25th anniversary of the handover to China.Credit:AP

An upbeat mood in financial markets is key for the troubled financial hub, where more than half of individuals say they own stocks – one of the highest proportions globally. The appearance of investor optimism also matters for Beijing, which tends to lend support to markets around key anniversaries or high-profile events in China.

The Hang Seng Index has gained 16 per cent since a mid-May low, outperforming every major benchmark in the world.

“Everything seems to be getting just that little bit better in Hong Kong ahead of July 1,” said Samuel Tse, an economist at DBS Bank.

“People are going out more, spending more, and generally have a more positive attitude toward the economy and markets. Government policies in Hong Kong and mainland China have helped improve the mood.” 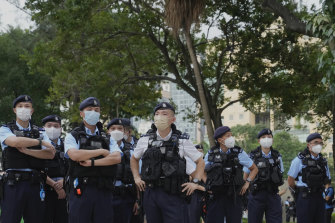 China hasn’t confirmed that Xi will visit Hong Kong, but past leaders have tended to make the trip every fifth year since the handover anniversary to swear in new leaders. It would be Xi’s first visit since 2017, when he warned pro-democracy activists to avoid crossing China’s “red line”.

The protests followed by the pandemic halted the daily influx of mostly Chinese shoppers, hurting retail sales and small businesses, while Beijing’s crackdown on dissent and strict COVID Zero measures prompted an exodus of residents. In May, the government cut its 2022 growth forecast to a range of just 1 to 2 per cent, compared with a 6.3 per cent expansion last year.

Hong Kong is tolerating hundreds of local daily COVID infections per day, showing a clear divergence with the mainland. Still, the city remains unable to eliminate the seven-day mandatory hotel quarantine that has cut down business travel and prompted companies to shift workers elsewhere in Asia.

“The border control measures have really made people very impatient,” Lam said on Friday in an interview with CNBC. “Of course, they’ve undermined Hong Kong’s status as a hub.”

“If you cannot travel freely to other places and into the mainland, how could you be a hub?” she said.

While Hong Kong lifted a ban on non-residents last month, provided they are fully vaccinated, all international arrivals are still subject to seven-day hotel quarantine. Such measures, which look draconian compared with the rest of the world, are hastening the departure of thousands of residents and sparking questions about Hong Kong’s future as a financial centre. 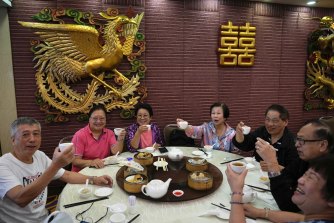 People have lunch in a restaurant in Hong Kong last week after the city reopened beaches and pools in relaxation of COVID-19 restrictions.Credit:AP

“Increasing signs that Xi may come on July 1 is one part of the reason markets have been doing well,” said Dongshu Liu, assistant professor specialising in Chinese politics at the City University of Hong Kong. “If Xi comes and makes some speech, unless he says something very clearly about national security and Zero COVID, it will indicate that the central government still supports Hong Kong.”

The city’s quarantine facilities are the fullest in more than three months after officials revived the COVID Zero tactic of mandatory centralised isolation to contain the spread of new sub-variants.

More than 50 people – close contacts of people who test positive for a sub-variant – are in government-run facilities, with occupancy hitting the highest since February this month. The overall number is likely higher as the government doesn’t release figures for Penny’s Bay, the biggest isolation camp for confirmed COVID cases and close contacts.

Hong Kong’s daily caseload has been creeping higher: it topped 600 for the first time since April this week. Many of the new infections are of unknown origin, indicating that the sub-variant is spreading in hidden transmission chains.

Still, financial losses can take a toll on residents. About two-thirds of Hong Kong respondents said the performance of their investments was having an impact on their mental health, according to a survey published by Schroder Investment Management.