Wong, the most high-profile member of the territory's pro-democracy movement, was a key figure in the protests over Beijing's rising influence that consumed the global financial hub for more than 15 months.

The Chinese Communist Party's crackdown in June introduced sweeping new national security laws on the former British colony, punishing dissent or threats to the Chinese state with sentences of up to life in prison. 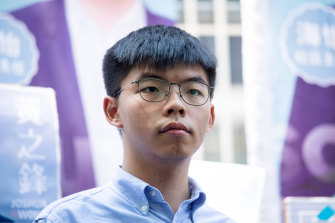 A tweet sent from Wong's account on Thursday afternoon said he has been detained. "Joshua is arrested when reporting to Central Police Station at about 1pm today," it said.

"The arrest is related to participating in an unauthorised assembly on [October 5] last year. He is told to have violated the draconian anti-mask law as well."

City-wide protests on October 5 blocked traffic in opposition to new emergency laws that banned the wearing of face masks in public gatherings. The laws allowed Chinese authorities to identify protesters in a bid to curb dissent in the city.

The 23-year-old said in August that he was prepared to go to jail after the passage of the national security laws. “I am mentally prepared for immediate imprisonment," he said.

A dozen pro-democracy activists were arrested in April over the protests in 2019.

In August, Agnes Chow, who co-founded pro-democracy movement Demosisto with Wong and Nathan Law, was detained on a charge of "colluding with foreign forces". If convicted, she could face up to life in jail. Law moved to London in July after the UK government offered asylum to Hong Kong residents who wanted to leave the city.

The trio were disqualified in running in Hong Kong's elections in July after the government said advocating self-determination, soliciting intervention by foreign governments, or "expressing an objection in principle" were in breach of the constitution. Wong had an appeal against the disqualification rejected on Thursday.

More than 600,000 voters had earlier cast their ballots in unofficial primaries despite warnings they were breaching new national security laws. The Hong Kong government then delayed the election scheduled for September due to the coronavirus.

Chow was released on bail on August 12 along with Hong Kong media tycoon Jimmy Lai after his Apple Daily newsroom was raided by up to 200 Hong Kong police.

Chow has accused Chinese authorities of political persecution. "I hope that Hongkongers shall not give up, and we shall continue to fight for our basic human rights," she said.