Fresh photos have emerged which show holes in the roof of the Russian-occupied nuclear power plant in Zaporizhzhia, as fears grow over a potential nuclear disaster in southern Ukraine.

Satellite and mobile phone pictures highlight a hole in the roof of what is claimed to be Special Building No. 1, where fresh fuel for nuclear reactors is stored in Europe’s largest nuclear power plant.

Russian forces, which captured the plant in the Ukrainian city of Enerhodar on the southern bank of the Dnipro River in March, accused Ukrainian troops of shelling the territory on Monday, according to Russia’s TASS news agency.

The Russian-installed city authorities said two 155mm shells fired from the city of Nikopol in Ukrainian-held territory exploded near a spent fuel storage building at the plant, the agency added.

In return, Ukrainian authorities accuse the Russians of setting up military installations next to the reactors and using them as nuclear hostages from which to shell Ukrainian positions.

The damage to the to the roof comes as inspectors from the International Atomic Energy Agency make their way to the site later in the week.

‘We must protect the safety and security of Ukraine’s and Europe’s biggest nuclear facility,’ said Rafael Grossi, director general of the agency. 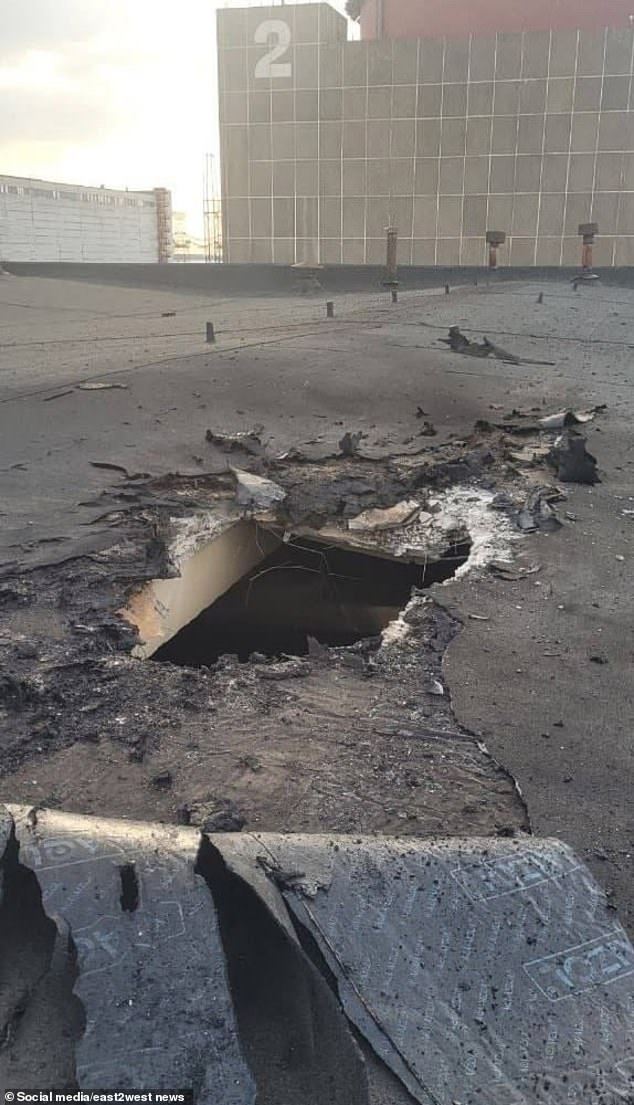 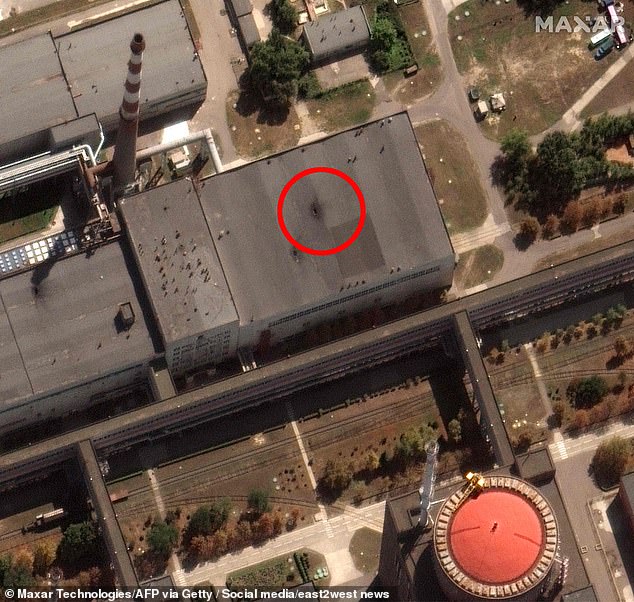 Satellite imagery appears to confirm the location of the strikes, which Russian authorities blamed on Ukrainian shelling 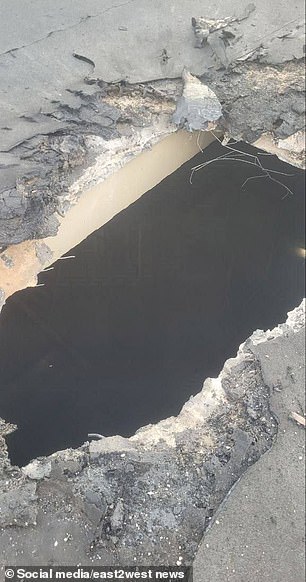 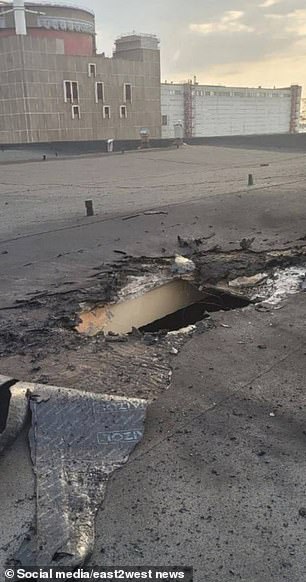 Satellite and mobile phone pictures highlight a hole in the roof of what is claimed to be Special Building No. 1 where fresh fuel for nuclear reactors is stored in Europe’s largest nuclear power plant 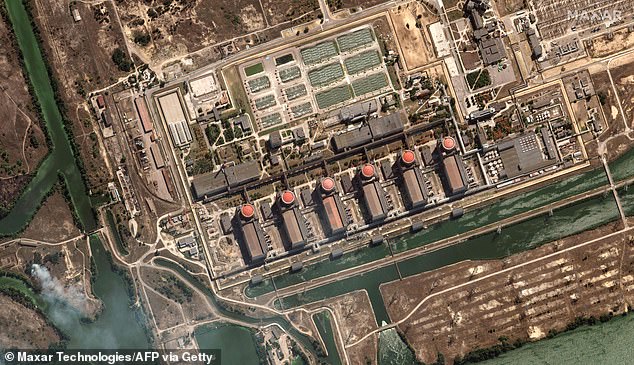 The team of 14 aims to get an accurate, first-hand understanding of conditions at the site and the extent of the dangers to both the staff working there and wider civilian populaces.

Vladimir Rogov, head of the occupying Russian forces in the region, said: ‘The roof of Special Building No. 1 of the Zaporizhzhia NPP was pierced as a result of a strike by Zelensky’s militants.

‘Fresh fuel for ZNPP reactors is stored in this building.’

The pictures – for which there is no independent verification – were released on the eve of the international mission by the IAEA to the plant in Energodar.

Ukraine and Russia have repeatedly accused each other of attacking Europe’s biggest nuclear power plant and risking nuclear catastrophe.

The Zaporizhzhia nuclear power plant is home to six separate nuclear reactors, whereas Chernobyl, which was the subject of a nuclear meltdown in 1985, held four.

While there was no nuclear mushroom cloud, huge amounts of radiation was released into the atmosphere in the form of a toxic cloud of ionising radiation, vastly increasing incidences of cancer among those exposed.

Satellite pictures have also claimed to show Russian armoured personnel carriers parked recklessly near the reactors, and Kyiv has accused Moscow of storing heavy weaponry and arms and stationing some 500 soldiers at the site.

This weekend, emergency services in the Ukrainian-held city of Zaporizhzhia held training sessions on dealing with a nuclear accident, including carrying out mock evacuations and decontamination exercises.

Meanwhile, to the west of the tinderbox situation, Ukraine forces claimed to have broken through Russian lines in a major new counter-offensive. 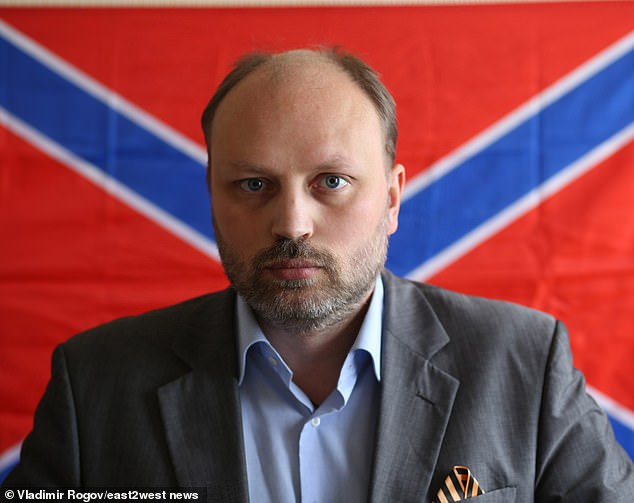 Vladimir Rogov, the head of the pro-Russian administration of Zaporizhzhia region blamed the damage to the roof of the nuclear power plant on Ukrainian shelling 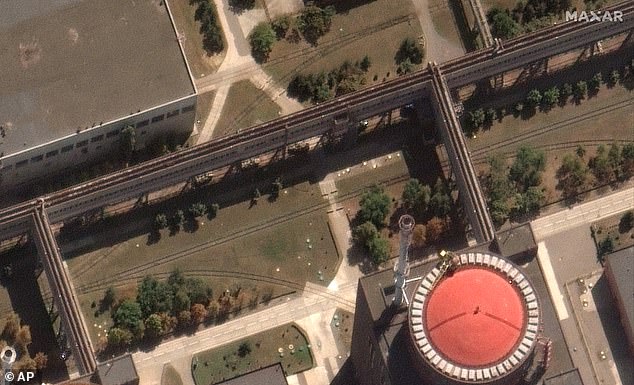 The ‘Kakhova’ Ukrainian military group said it had seen ‘the retreat’ of pro-Russian separatist fighters from their positions in Kherson.

The southern military command announced today they had carried out the long-awaited manoeuvre, reflecting Kyiv’s growing confidence as Western military aid flows in.

‘Today there was a powerful artillery attack on enemy positions in … the entire territory of the occupied Kherson region,’ Sergey Khlan, a local deputy and adviser to the regional governor told Ukraine’s Pryamyi TV channel.

‘This is the announcement of what we have been waiting for since the spring – it is the beginning of the de-occupation of Kherson region.’

Khlan said Ukrainian troops now had ‘the advantage’ on the southern front.

Several strikes in recent weeks have targeted bridges in the region, in a bid to hamper logistics for the Russian military. 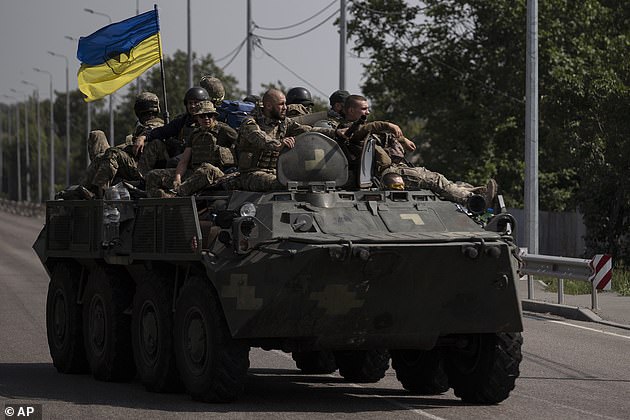 Ukraine has gone on the attack and launched a counter-offensive to strike back at Russian forces in the south (pictured: Ukrainian servicemen in Donetsk yesterday)

In late July, Khlan said the region would be recaptured by Kyiv’s forces by September.

However, she declined to be drawn into giving more details about the new offensive.

‘Any military operation needs silence,’ she said, adding that Russia’s forces in the south are ‘rather powerful’ and have been built up over a long time.

Russia rapidly captured swathes of Ukraine’s south near the Black Sea coast, including Kherson, in the early phase of the war in stark contrast to its failed attempt to capture the capital Kyiv.

Humeniuk told a briefing on Monday that Ukraine had struck more than 10 such ammunition dumps in the past week, adding they had ‘unquestionably weakened the enemy’.