‘Suicidal’ Highland Park shooter was interviewed by cops TWICE in 2019 after he threatened to ‘kill everyone’ and had 16 knives, dagger and SWORD confiscated but was not arrested: Cops say still no motive for killing seven on July 4 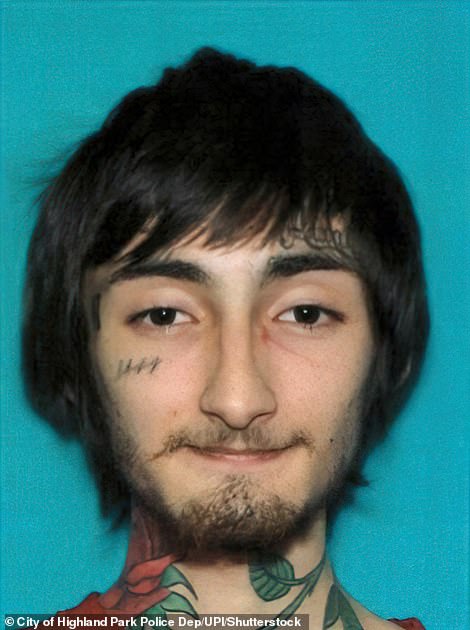 Highland Park shooter Bobby Crimo was questioned by police twice in 2019 including once after threatening to ‘kill everyone’ and another after he threatened suicide, but was never arrested.

Crimo is now in custody awaiting charges for the massacre yesterday. Police at first said he was not known to them but on Tuesday, they revealed he was interviewed twice by authorities.

Police recovered 19 knives and a dagger from his home but he was not arrested.

Instead, he was able to turn 21 and buy two assault rifles in Illinois, along with three other types of gun. It remains unclear why the two previous incidents were not flagged when he legally purchased the weapons.

Chris Covelli of the Lake County Sheriff’s Office disclosed the prior incidents at a press conference on Tuesday afternoon.

In the April 2019 incident, ‘an individual contacted Highland Park department a week after learning of him attempting to suicide. It was a delayed report.

‘They responded to the residence, spoke to him, his parents and the matter was being handled with the mental health profession. There was no law enforcement action to be taken.

‘In September 2019, a family remember reported that he said he was going to “kill everyone” and that he had a collection of knives. They responded and took 16 knives and a dagger from his home.

‘There was no probable cause to arrest and no complaints assigned by the victims. They did notify the Illinois State Police.’

Police have still not been able to determine a motive. Crimo is expected to be charged later today.

Six of the seven people that were killed in the shooting have been named. They are Steve Straus, 88; Katherine Baldstein, 64; Jacki Sondheim, 63; Nicholas Toledo Zaragoza, 78; and husband and wife Irina and Kevin McCarthy, 35 and 37.

The McCarthys leave behind a two-year-old son, Aiden, who was found wandering alone in the aftermath of the shooting.

After the attack Monday, he fled among frightened paradegoers, pretending to be one of the victims, and went to his mother’s house.

Police said they do not think she knew that he was the shooter when he asked her for her car. She gave it to him and he fled the area. 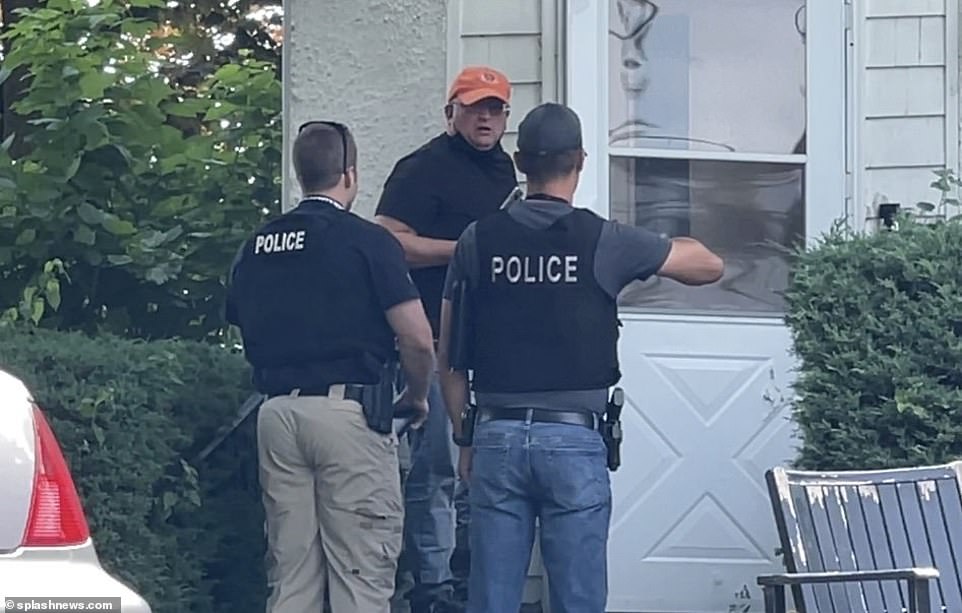 Police interviewing the father of Highland Park shooter on Tuesday. He has not yet issued any public comment 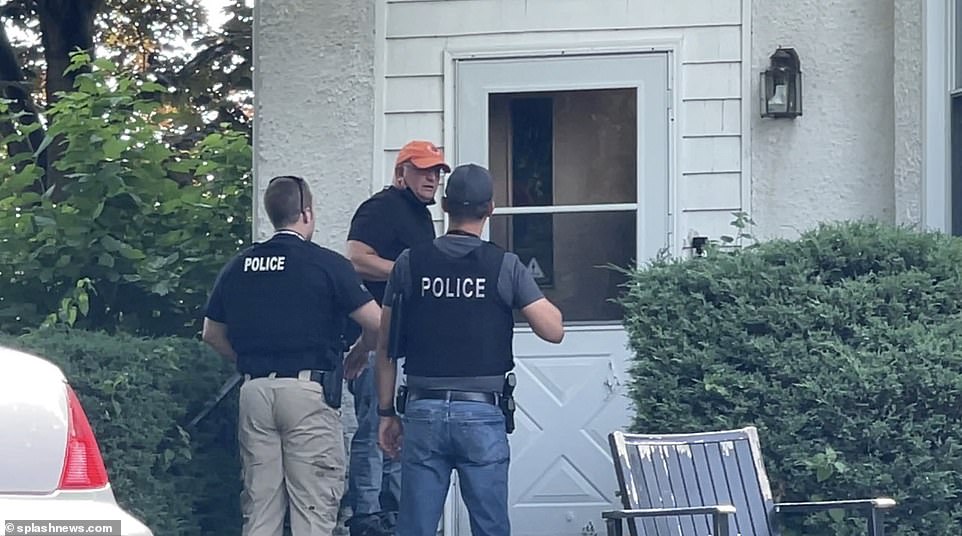 The suspect’s uncle told CNN that the FBI made contact with the family around 2:30 pm on the day of the shooting 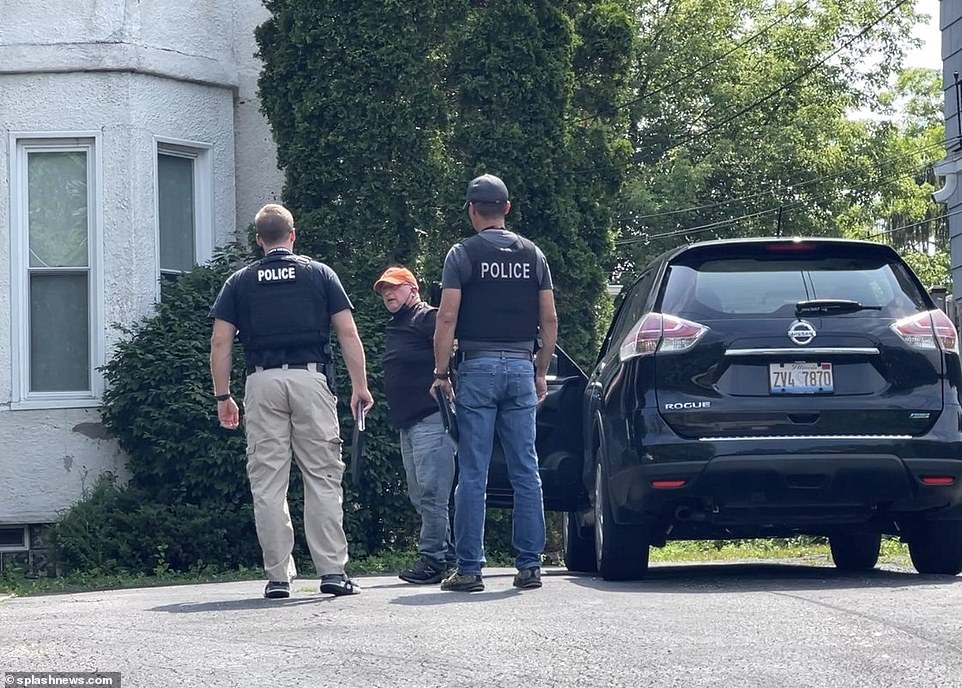 Crimo’s father Bob Sr. was cornered by police as he arrives at home on Tuesday 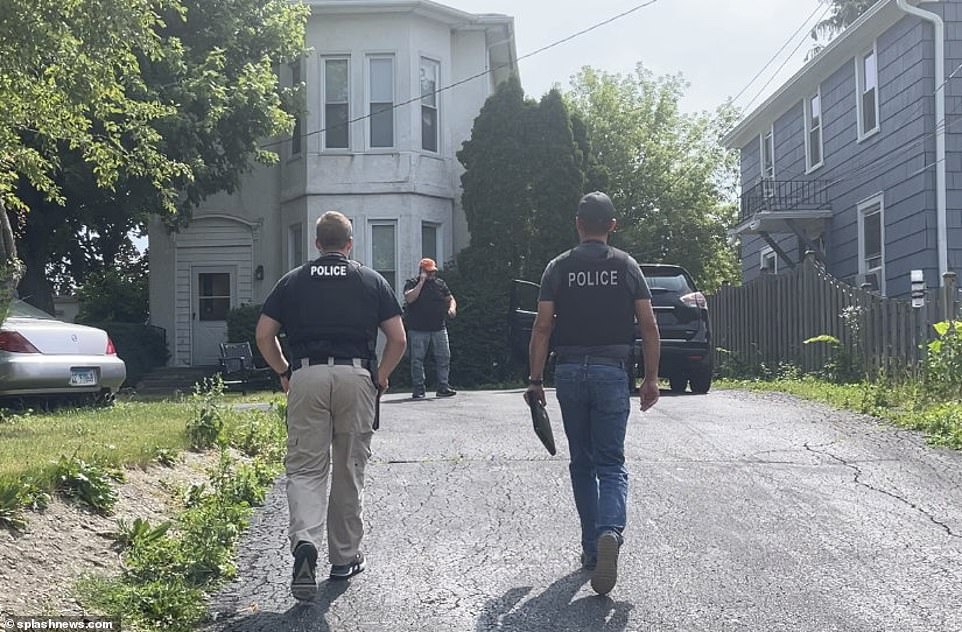 It comes as questions over the gunman’s motive, lifestyle and his obsession with the numbers 47 arise.

Crimo had a 47 tattoo on his cheek and the numbers are emblazoned on the side of a car.

The vehicle was left abandoned in the front yard of his home on Tuesday, after it was raided by FBI agents. Crimo also posted the number all over his social media accounts, where he also shared ominous rap videos that glamorized school shootings.

On Tuesday, it was revealed:

Paul Crimo, his uncle, has since told how he was behaving normally on Sunday night. He claims he showed ‘no signs of violence’ – despite YouTube rap videos in which he glamorized school shootings. The shooter’s motive for yesterday’s attack remains unknown.

‘I’m heartbroken. I’m so heartbroken. There were no signs that I saw that would make him do this. He’s a quiet kid. He’s usually on his own. He’s a lonely, quiet person. He keeps everything to himself,’ Paul Crimo, his uncle, told CNN.

In the same interview, Paul Crimo confirmed that his nephew lived in a small apartment behind the house owned by Bob Crimo Jr., along Pleasant Avenue in Highwood. 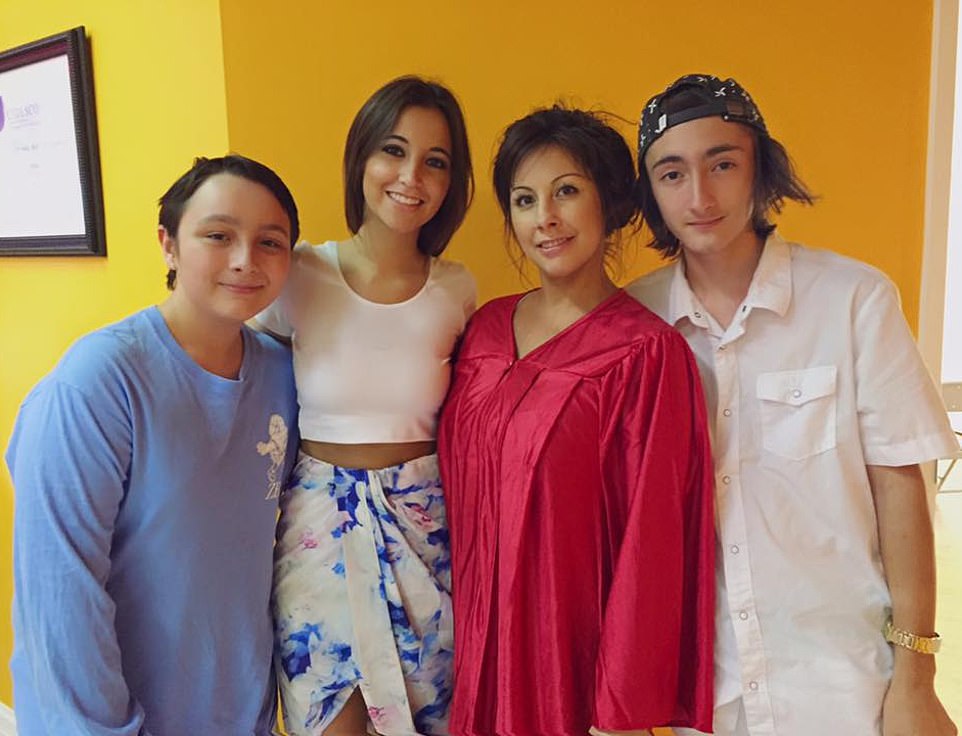 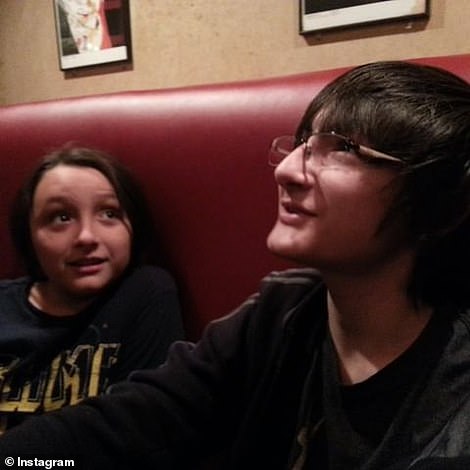 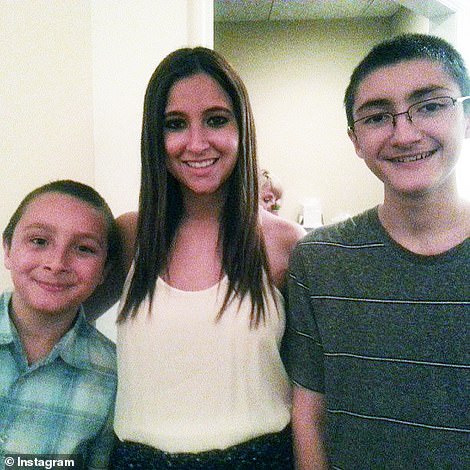 Bobby Crimo, 21, (right) with his little brother Sam (left). The pair attended Lincoln Elementary School and between 2008 and 2014, they attended the LEAP afterschool program. They were routinely the last kids to be picked up, according to coaches who taught them

‘Everything was as normal,’ he said, adding that he was sitting on a recliner in his home the night before the shooting, looking at his computer. We are good people here, and to have this is devastating. I’m so heartbroken for all the families who lost their lives.’

Crimo’s parents have not yet addressed the attack. His father Bob Sr. ran unsuccessfully for mayor against Nancy Rotering.

On Tuesday morning, Rotering confirmed that Crimo ‘legally obtained’ his weapon. She said she taught him when he was a cub scout, and that he was a normal ‘little boy’. Police are yet to confirm what type of weapon he used, but witnesses and videos suggest it was a high-powered rifle.

‘It’s one of those situations where you stand back and ask, what happened? How did somebody become this angry, this hateful, to then take it out on innocent people who were just literally having a family day out.?

‘He was just a little boy,’ she said. 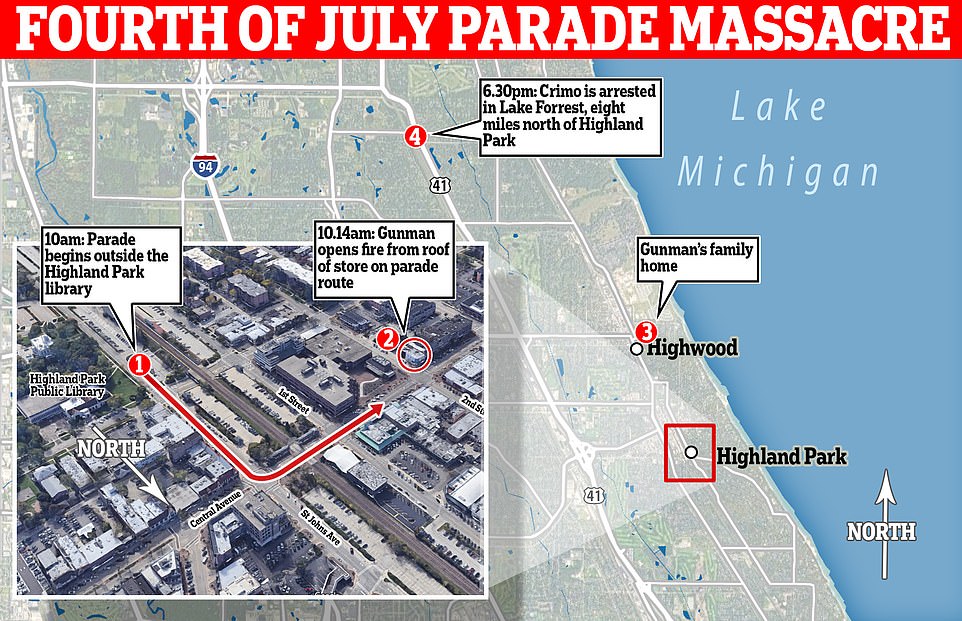 The gunman opened fire at 10.14am on Monday, barely 15 minutes into the parade. He then fled the scene and hid throughout the day before eventually being arrested at 6.30pm in Lake Forrest, eight miles north of where the massacre unfolded

Little boy, 2, found bloodied and alone during Highland Park parade shooting is ORPHANED after both his parents were killed in massacre

The little boy who was found bloodied during the Highland Park parade shooting on Monday and lifted from underneath his father is left orphaned after both is parents were killed in the gruesome attack.

Kevin McCarthy, 37, and Irina McCarthy, 35, were among the seven people killed during the Fourth of July celebration.

Their two-year-old son, Aiden, had been separated from his parents during the chaos and luckily unharmed. He has been placed in the care of his grandparents.

A GoFundMe page was established to help Aiden’s family with ‘raising, caring for and supporting’ him. The account has already raised more than $79,000. 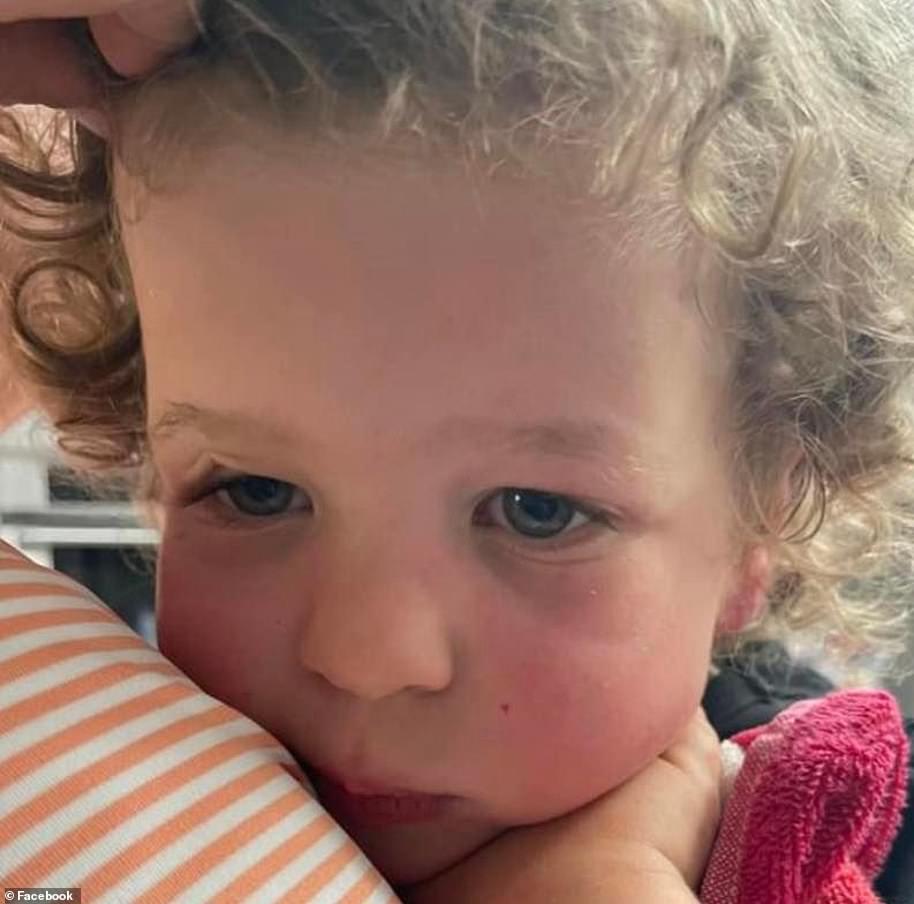 Aiden was found by Lauren Silva, 38, of Deerfield, and her boyfriend after they heard gunshots as they were heading to breakfast at Walker Bros restaurant.

Silva told the Daily Beast they emerged from a parking garage a few blocks away from the shooting just as the violence began to unfold.

Silva and her boyfriend and his son began running toward those who were injured, when suddenly, her boyfriend thrusted the little boy into her arms.

‘My boyfriend handed me this little boy and said he was underneath this father who was shot in the leg,’ she told the Beast.

‘They were trying to stop the bleeding so I brought the boy downstairs into the garage.’

Once inside the garage, she managed to clean out his scrapes and washed the blood off him. She said he was wearing one shoe and his sock was covered in blood.

‘He kept asking if mom and dad are going to come back soon,’ she said. 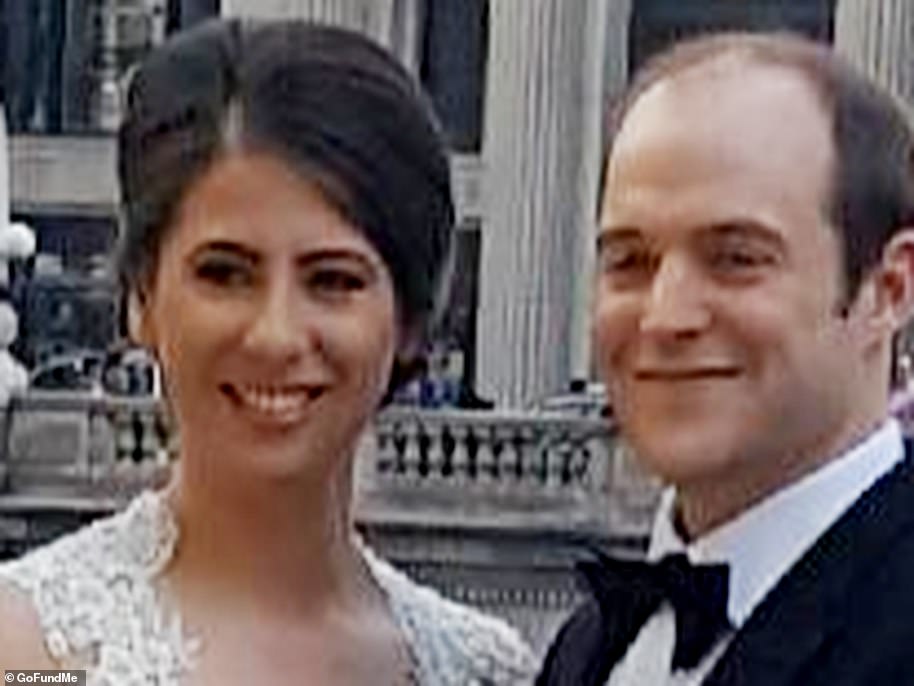 Kevin McCarthy, 37, and Irina McCarthy, 35, were among the seven people killed during the Fourth of July celebration

Silva reemerged from the parking garage after 20 minutes to see how the father was doing. She handed the child off to a family she was hunkering down in the garage with, who took him to the hospital and later handed him to police. He was eventually reunited with his grandparents, according to Silva.

Dana Ruder Ring, who was taking care of the child until 8 p.m., according to Fox 32 Chicago, posted the original photo of the boy to help identify him.

She told Fox 32 he’s too young to know his parents’ the names.

Silva, a mother of two, said she’s holding on to the memory of the ‘kid’s face and his touch and the sound of his voice.’

‘I feel like I want to hold on to, like, a little bit of emotion that I feel—which is telling that boy that his dad was going to come back,’ she said.