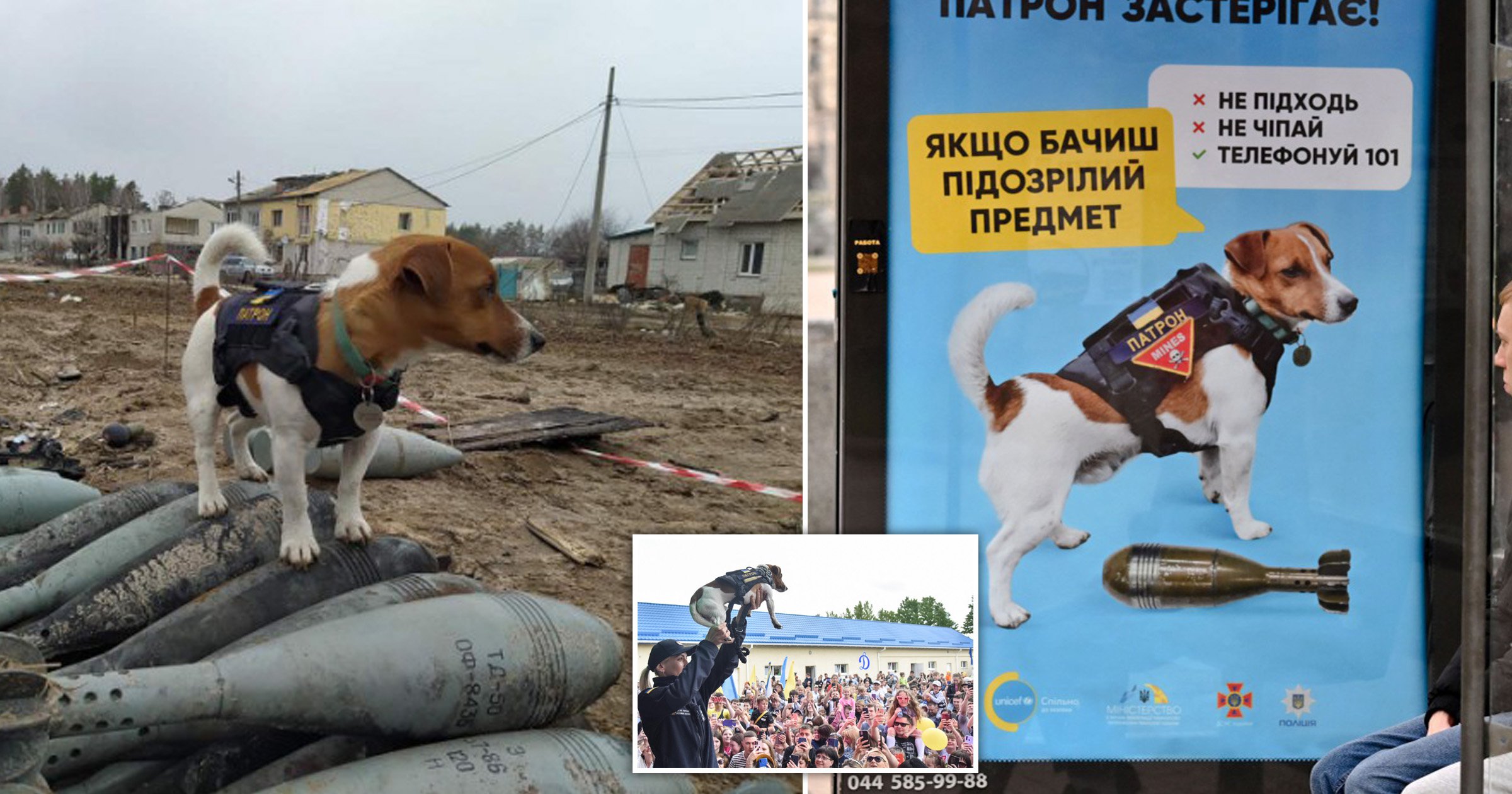 A heroic sniffer dog who discovered more than 200 explosives has become the face of a new bomb-safety campaign in Ukraine.

Patron, a two-and-a-half-year-old Jack Russell, became famous earlier this year after his bomb-sniffing prowess saw him presented with a medal by President Zelensky.

Since then, Patron, whose name translates to ‘ammo’ or ‘cartridge’ in Ukrainian, has become a national symbol of resistance against Russia.

‘One day, Patron’s story will be turned into a film, but for now, he is faithfully performing his professional duties,’ tweeted Ukraine’s Center for Strategic Communications.

His latest appearance comes as part of a new campaign to help raise awareness of landmines and other Russian IED’s, which sees the pooch imploring people in central Kyiv to remain vigilant of explosive devices.

‘The cartridge warns… if you see a suspicious object, don’t touch it!’ reads the poster, making reference to Patron’s nickname.

Zelensky presented Patron and his owner, Mykhailo Iliev, with their awards at a news conference back in May, alongside Canadian prime minister Justin Trudeau.

As Patron was presented with his award, Trudeau, who had made a surprise visit to the war torn country that weekend, jokingly patted his pockets down as he pretended to look for dog treats.

‘Today, I want to award those Ukrainian heroes who are already clearing our land of mines,’ Zelensky said after the ceremony.

‘And together with our heroes, a wonderful little sapper – Patron – who helps not only to neutralise explosives, but also to teach our children the necessary safety rules in areas where there is a mine threat.’

The brave little dog has won the hearts and minds of people in Ukraine and beyond- his Instagram page has amassed over 330k followers, and he is frequently paid tribute to by fans with artwork that’s both tongue-in-cheek and sincere.

‘Our brave baby Patron has inspired an incredible number of gifted artists,’ the Ukrainian emergency services said in a Facebook post earlier this year.

‘It motivates us not to give up no matter how hard it is, to keep the bar high and to fight with new strength, knowing how many people are still waiting for help and how many people believe in us,’ the SES said.

‘Our Patron doesn’t let his feet down either and sends his gratitude to everyone.’