Business groups say the threat of a jobs exodus from Victoria due to a $250 million NSW scheme to lure major companies from the state's COVID-19 ravaged economy should be taken seriously.

But the Andrews government has shrugged off the warning, saying it has already provided billions of dollars in support to Victoria's major employers and would provide much more in its November 24 budget.

NSW Premier Gladys Berejiklian said the recovery from the COVID-19 recession was an opportunity to poach jobs from interstate – most likely Victoria and Queensland – and overseas, citing lockdowns and border closures as reasons why companies wanted to move their headquarters to her state. 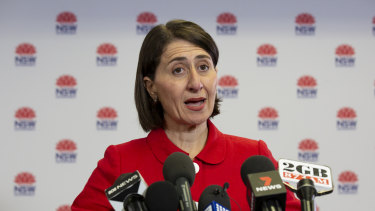 Announcing $250 million in payroll tax breaks for interstate or overseas companies moving or expanding into NSW, Ms Berejiklian said on Thursday her government had received inquiries from outfits around Australia who were considering making the move.

Ms Berejiklian and her Treasurer Dominic Perrottet said they hoped the policy would lure up to 25,000 jobs to NSW, but would not name which organisations had been in touch or where they were currently based.

Flight Centre chief executive Graham Turner has said he would consider moving the company’s headquarters from Queensland to NSW if Ms Berejiklian could guarantee “the borders would open and stay open”.

Both the Victorian branch of the Australian Industry Group and the state's Chamber of Commerce and Industry said they were aware of firms considering a move north after the tough few months the local economy had endured, but that it was inappropriate to name them.

Announcing the scheme, which would offer four years of zero payroll tax to businesses that create 30 new jobs or more, Ms Berejiklian spoke of the huge frustration of companies in some states over their governments' responses to the COVID crisis.

“Businesses in other states are extremely frustrated with lockdowns and also with their state governments having borders closed. They are legitimately looking to move to NSW,” she said.

“What the Treasurer and I wanted to do is provide the incentive to do that.”

Some of Australia's biggest corporations, including big-four banks ANZ and NAB, mining behemoth BHP and communications giant Telstra, have their global headquarters in Melbourne. The city's business community has bristled under the months-long lockdown ordered by the Andrews government in response to Victoria's devastating wave of coronavirus infections.

A spokesman for Victorian Treasurer Tim Pallas said the state government had already provided billions of dollars in businesses support, including $550 million in payroll tax refunds, since the pandemic struck and that more help was on the way in its budget.

“We've stood with Victorian businesses and their workers every step of the way, with more than $6.5 billion in direct economic support to help make it through to the other side of the coronavirus crisis,” the spokesman said.

“The budget will continue our support for businesses, workers and families and deliver major investment in the job-creating infrastructure and services Victorians need as we rebuild from the pandemic.”

During the Andrews government's lockdown many Melbourne businesses and business groups were loud in their opposition, with some calling it a "blunt instrument" and others decrying the uncertainty when it was extended or deepened.

NSW businesses with annual wage bills of more than $1 million will pay 5.45 cents in the dollar to their state government this year, while Victorian employers paying their workforces more than $650,000 annually will pay 4.85 per cent, or 2 per cent for regional firms.

Victorian Chamber of Commerce and Industry chief executive Paul Guerra said payroll tax was a "tax on jobs and growth". He urged Mr Pallas to raise the tax-free threshold to $1 million and drop the rate in the dollar for both regional and metro businesses.

“We don’t want to lose any businesses to NSW, which is why the Victorian Chamber is continuing to lobby the Victorian government to include payroll tax relief in its budget," Mr Guerra said.

“Victoria was the engine room of the national economy before COVID-19 hit and, with the right incentives, levers and policies, we will be once again.”

Tim Piper, the Victorian head of the Australian Industry Group, said he was aware of companies looking to expand their operations beyond Victoria’s borders so that they would never again be "held hostage" by a single state government.

But the expense and disruption of moving an entire operation interstate would prove too much for many Victorian businesses, Mr Piper said, adding that firms would not want their plans in the public realm.

“It’s more a question of not putting all their eggs in one basket,” he said.

“But I think they’d want to keep that to themselves at the moment.”