Hawthorn legend Don Scott says president Jeff Kennett could harm the club if he were to also lead the Victorian Liberal Party while the Hawks are seeking millions of dollars in funding from the Andrews government.

The former Liberal premier will meet party president Robert Clark this week to discuss a potential handover of its divided administrative wing as it prepares for the 2022 state election. A seamless transition from Mr Clark to Mr Kennett is deemed unlikely by well-placed party sources. 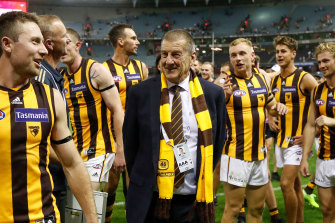 Jeff Kennett with Hawthorn players after their one point win over Essendon on Saturday.Credit:Getty Images

Mr Kennett, who has fervently attacked Premier Daniel Andrews, calling him a dictator in charge of a communist state, said in November that the state government was not funding the club’s proposed new training facility in Dingley because of his political stance.

Scott, a former dual premiership captain who retains influence at Hawthorn, said Mr Kennett would harm Hawthorn if he took the party role.

A board member and a senior Hawthorn figure said Mr Kennett’s prospective role could raise the question of whether he was acting in the best interests of the club.

The senior club figure, who spoke anonymously so as to talk frankly about the matter, said: “If [Mr Kennett] were to take the Liberal presidency, it would further alienate Hawthorn from the state government. He shouldn’t do both.”

The club is seeking $50 million from all levels of government for the Dingley site and has received a $15 million federal government commitment but has as yet been unable to secure state funding. 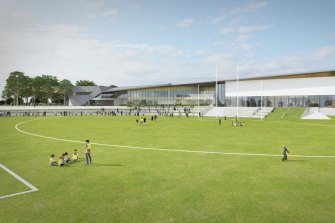 An artist’s impression of Hawthorn’s planned Dingley training base.

Scott noted that almost all Victorian clubs other than Hawthorn had received state cash for facilities in the past decade and said Mr Kennett would become “more of an enemy of the government if he’s president of the Liberal Party”.

He said it was acceptable that Lindsay Tanner, the former federal Labor minister, became the president of Essendon Football Club after leaving politics because Mr Tanner ceased to be a public commentator on politics once he left Parliament.

”He was low-key. This difference is Jeff is actively going back into politics,” Scott said.

“He is involved in political commentary and is upsetting the incumbents, so there’s already a conflict there.” 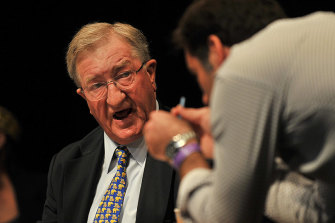 A board member who spoke anonymously to discuss internal affairs said the board would need to discuss the implications of Mr Kennett’s Liberal role, should it eventuate, for the club’s governance.

The senior club figure said there had been consternation among Hawthorn board members over the past year over Mr Kennett’s claims the state government was withholding funding, and over his surprising statement last month that Hawthorn could relocate to Tasmania.

But John Elliott – the prominent Melburnian who was president of both the Carlton Football Club and the federal Liberal Party during the Cain Labor government – backed Mr Kennett’s Liberal tilt.

“He can handle it all right … I don’t think [the two positions] compete very much,” he said. “The party needs better leadership.” 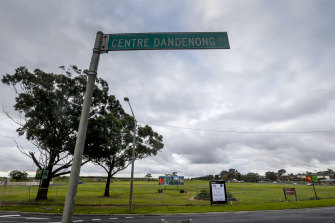 The future home of the Hawks.Credit:Eddie Jim

Several senior Liberal sources, who also spoke anonymously to speak frankly about party affairs, said it was unlikely Mr Clark would step aside to allow Mr Kennett to run, even though the two men respected one another.

An administrative committee source said Mr Kennett, 72, was being pushed by former president Michael Kroger, who has been working with others in the faction he belongs to get rid of Mr Clark. The source said Mr Kennett was being used for this purpose and argued he would not have the time or acumen to navigate the highly factionalised internal systems.

“Kennett is nobody’s idiot, but he’s being a very useful one right now,” they said.

One source said Mr Kennett, who was contacted for comment, could make a strong contribution to the party through fostering links with the business community and attracting promising candidates ahead of the November 2022 election.

The Liberals, who are trailing the government in published polling, have faced similar problems during the pandemic to other opposition parties, which have been outshone by incumbent governments taking strong action to overcome the health and economic crisis.

“There’s a role for [Mr Kennett] to energise the party, but it’s not as president,” the source said.

“The fact that the party hasn’t been able to move on from him after 25 years is embarrassing.”