All sex is rape, argued radical feminist Andrea Dworkin. She believed that because we live in a patriarchal society heterosexual sex can only be understood as domination: “the pure, sterile formal expression of men’s contempt for women.”

Dworkin’s polemics from the 1980s and 1990s made her the enemy of “sex positive” feminists who were pro porn and pro sex work. Indeed most people recoiled from her unyielding, dark take on sex, which seemed to strip women of all carnal agency, and joy. But I had a bit of time for Dworkin’s ideas, despite being myself heterosexual (within a measly margin of error). She was articulating something previously unsayable about encounters between men and women: the eroticism stems for the former violating the boundaries of the latter. Even when the parties are equally enthusiastic, the subtext of conquest and submission lurks in the bedroom like a third person. 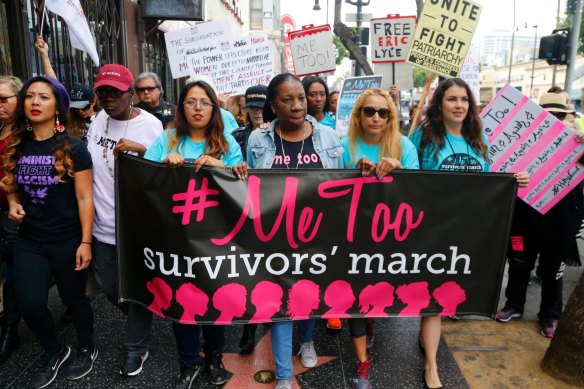 A bill to pass affirmative consent laws was introduced to Victoria’s parliament last week. The proposed changes are in part driven by the #Metoo movement.Credit:Damian Dovarganes

Dworkin died in 2005. But as the New York Times′ Michelle Goldberg noted in 2019, in the #MeToo era, feminists began invoking the firebrand theorist “in a spirit of respect and rediscovery”. This is not because women suddenly believe all sex is rape, or all men rapists. But because, Goldberg argued, Dworkin has relevance for a new generation “engaged, in a pitched cultural battle over whose experiences and assumptions define our common reality”.

I hear Dworkian echoes in the wave of “affirmative consent” reforms to sexual assault laws. Such legislation was introduced into Victoria’s parliament last week; Queensland is likely to follow, and NSW passed similar laws last year.

Under the Victorian bill, a man – the actual wording is gender neutral, but the overwhelming reality of sexual assault is not – can only reasonably believe a woman was consenting throughout an encounter if he took active steps to find out, such as asking her, or looking for signs of reciprocity like removing clothes. Radical? Well, it sounds radical. Like I said, I hear echoes of Dworkin who talked about “presumptive rape”.

You could read into the bill an assumption that the sex act in question was non-consensual unless the accused has evidence to the contrary. And that is a significant philosophical flip; the “no means no” mantra of the 1970s has become “only ‘yes’ means yes”. Rape laws have traditionally favoured men who managed to breach women’s boundaries, which were considered rubbery to start with. Affirmative consent, says Victoria’s Attorney-General Jaclyn Symes, shifts the scrutiny from the victim – what she did, what she wore – to the accused; what did he do to ascertain her state of mind?

The defence barristers argue, as they’re professionally obliged to do, that the laws could criminalise cases in the “grey zone,” ensnaring hapless, emotionally unintelligent teenage boys – who don’t fit the traditional profile of a predator – after a night of drunken misadventure. To which the feminist campaigners say, yes that’s the point of the exercise: to eradicate the grey zone because the woman who is feeling degraded in the aftermath of an encounter doesn’t think the zone’s grey anyway.

If I was convinced of the accuracy of the underlying premise – namely that the proposed laws have the serious potential to criminalise cases that don’t presently make the cut for rape – then I’d be more sympathetic to the defence barristers’ warnings about unintended consequences. But I’m not convinced, for what my lay opinion’s worth. Largely because I don’t think this new articulation of what constitutes “reasonable belief” in another’s consent is a significant departure from the current law. Unless I’m misreading the text, an accused doesn’t have to ask if the other party’s consenting: they just need to actively seek out positive cues, and be on alert for negative ones.

I’m not even convinced the changes would catch a horror scenario like Saxon Mullins’ case, which sparked the campaign for “affirmative consent”. Luke Lazarus successfully argued he had reasonable grounds for believing Mullins, an 18-year-old drunk virgin he’d met four minutes earlier in a Kings Cross nightclub, consented to being anally penetrated in a laneway as the gravel grazed her hands and knees. Even under an affirmative consent model, Lazarus would still be at liberty to argue, as he did in successive trials, that Mullins did what he told her to do, moved her body to facilitate the intercourse, and so on.

Which is in no way to diminish the heroic efforts of Mullins and the other survivors driving Australia’s #MeToo reckoning on sexual violence. On the contrary: the main purpose of “affirmative consent” laws is symbolic. It is about changing men’s default settings on sex away from breathtaking entitlement. Men and women are getting better at understanding each other’s language of intimacy; to deny as much would be churlish and sour. But for all its utopian ambitions “affirmative consent” won’t end the sexual inequities that can turn a fun night out into a lifelong nightmare.