Bike lanes in Melbourne continue to be a divisive issue. As lord mayor, it is one of the issues that regularly appears in the feedback I receive from people who live and work in the municipality.

The City of Melbourne is committed to creating a CBD that works for all workers, traders, residents, students and visitors. That’s why we undertook a detailed, independent transport review late last year, which made recommendations to make our transport system more efficient. 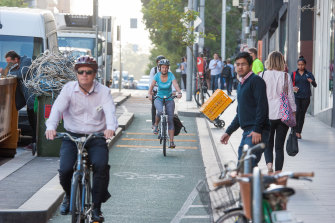 What concerns me is that a narrative has emerged regarding Melbourne’s bike lanes and the alleged effect on parking and congestion that does not reflect the facts.

Public transport has always been the backbone of Melbourne’s transport network, and underpins the city’s economic development today. Before the COVID pandemic, 60 per cent of the more than 350,000 people who worked in the city came in by train, tram or bus, compared to 27 per cent who drove in by car.

Seven per cent walked and 6 per cent cycled. Our independent transport review found that public transport is still the choice for the majority, despite the pandemic, with cycling activity increasing 12 per cent in recent weeks. That figure continues to climb.

When people do drive into the city, the majority park in one of the more than 140,000 private, off-street, multi-storey car-parking spaces that are available in our city. In fact, if you’re in the CBD, you are never more than 200 metres away from a secure off-street car-park.

In total, there are 23,000 on-street parking spaces managed by the City of Melbourne. We have removed 421 of those to make way for protected bike lanes. 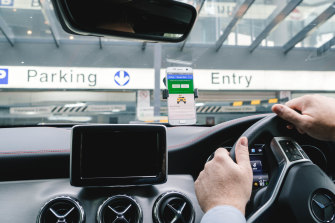 In the CBD you are never more than 200 metres away from a parking space, according to the lord mayor.

We’ve chosen to deliver protected bike lanes because the number of people choosing to ride in our city is rising rapidly. In fact, there’s been an increase of up to 300 per cent in cycling activity on some of our key cycling connections from areas such as Darebin, Stonnington and Bayside over the last two years.

We have a duty to provide a safe city, and we must build safe infrastructure to cope with increasing demand. Otherwise, with more people scooting and riding it’s inevitable that there will be accidents with tragic consequences for road users. According to Transport Accident Commission data, hospitalisations from accidents involving cyclists increased by 65 per cent between 2010 and 2020 in the City of Melbourne. International research shows that streets with protected bike lanes improve safety for all road users.

Another key priority for the city is to reduce traffic congestion. Department of Transport data shows that bike lanes can move roughly three times as many people as one car traffic lane.

The City of Melbourne is committed to reaching zero emissions, so we will continue to support and promote green transport modes, such as bikes and e-scooters, which do less harm to the environment and take up less space on our streets.

At the same time, we are doing everything we can to attract people back to the city. We want to be able to welcome them by public transport, on bikes, on e-scooters, by ride-share services and private vehicles. There is no “right” way to come into the city, and, more than ever, we want Melbourne to be a city that is accessible to everyone.

We’ve heard that some traders want flexible daytime parking options for returning office-workers and visitors to enjoy a quick lunch. That’s why we will be working with carpark operators to promote daytime parking deals that benefit business owners. On-street parking is limited and important for essential trips, and we will always ensure there are spaces for people living with a disability and delivery drivers.

There have never been so many exciting reasons to return to the city, and there is a transport option for everyone. Popular modes of transport change with the times, and we are doing our bit to ensure Melbourne has the foundations to support everyone, no matter how they like to get into the city, for many years to come.

Sally Capp is the lord mayor of Melbourne.