Emergency departments have been pushed beyond the brink, the triple-zero emergency call system has been in crisis, there is a backlog of surgery that could take years to clear and hospital staff are exhausted and in short supply.

But Victorian Health Minister Mary-Anne Thomas has defended the state’s health funding, following a report by this masthead that showed soaring inflation and a reduction in one-off funding for COVID-related initiatives could see Victoria’s health budget reduced by more than 13 per cent in real terms this financial year. 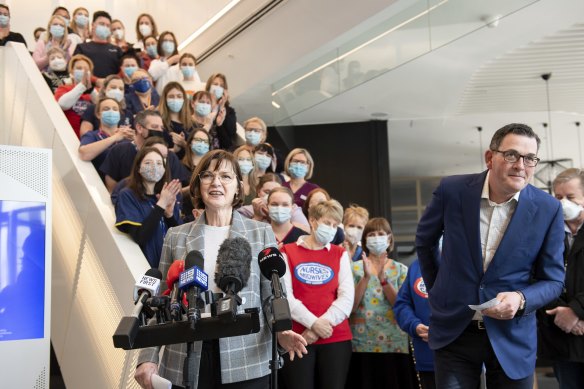 So does Victoria’s health service have enough money, and how do we compare to other states?

According to the latest state budget papers, the government has set aside $25.02 billion this financial year to achieve the objective of ensuring “Victorians are healthy and well”. That represents a 7.5 per cent drop on the amount that was actually spent during the previous financial year: $27.06 billion.

However, it is still about 7 per cent more than the amount the government originally expected to spend in 2021-22 ($23.39 billion), before that financial year started.

So which is it? A 7.5 per cent nominal funding cut, or a 7 per cent increase?

Thomas is, of course, drawing attention to the latter figure showing a funding lift. But the Victorian Healthcare Association, which represents public hospitals, suggested this week that health funding in Victoria is failing to keep pace with soaring costs, warning of worse outcomes for patients at a time of record demand.

Before the pandemic hit, health funding in Victoria was comparatively low. According to the Productivity Commission’s annual Report of Government Services, Victoria was spending less money per person to run public hospitals than any other state in 2019-20, with fewer beds, fewer staff and longer wait times in emergency departments.

Victorian public hospitals received the equivalent of $2687 a person in recurrent funding in 2019-20, compared with a national average of $2971 a person. No other state offered up less funding per capita, with hospitals getting the equivalent of $2887 per individual in NSW, $3094 in Queensland, $3366 in Western Australia, $2730 in South Australia and $3294 in Tasmania.

There were some good reasons for this. Victoria is a geographically small and densely populated state, lowering costs compared to other states.

Victoria’s hospitals are also comparatively “efficient”, something which dates back to a major cost-cutting push during the Kennett-era.

Efficient hospitals, operating with little excess fat, are not a bad thing in normal times. The real test, is when something abnormal happens, like a one-in-a-hundred-year pandemic.

Thomas’ comparison, using a hypothetical budget prediction made about a year and a half ago that in reality was revised up by $3.67 billion, isn’t as unreasonable as it might seem.

The government’s argument is that when it comes to “core” funding to deliver services, the more relevant figures are the amount that was originally budgeted.

On Friday, a government spokesman said an additional $4.2 billion had been invested to respond to COVID-19 in 2021-22, delivering support for hospitals treating people with COVID, millions of rapid antigen tests and vaccinations to millions of Victorians.

“Each year, additional funding is provided for initiatives not foreseen at the time of budget, already this year we have invested a further $162 million to support our paramedics and emergency departments throughout winter,” the spokesman said.

Moreover, at this stage we only have a budget forecast of expected spending for the current financial year. The 2022-23 budget prediction was made in about April, before the inflation genie really escaped the bottle. Actual spending for 2022-23 will inevitably be revised up to reflect surging costs and other policy announcements.

So by the time the financial year finishes, the health funding gap probably won’t turn out to be as bad as it currently seems.

However, even if we take the government at its word on the 7 per cent increase, real health spending is still most likely to go backwards after factoring in inflation. According to the Reserve Bank, this financial year inflation is likely to be around 7.2 per cent.

The government also points out that the health inflation faced by the hospital system may well turn out to be lower than general inflation, which has been bumped up soaring prices for petrol, food, rent and houses.

Either way, when you’ve got a system that is clearly under immense stress, semantic or technical arguments such as these probably won’t cut it. Voters simply want the system fixed. That will take not only a lot of money, but also time.