So THAT explains the long face! Grandmother, 67, is banned from feeding ‘skinny’ retired racehorse Nelson CARROTS and slapped with restraining order after furious owner insists he is perfectly healthy and SHE is risking his life

A grandmother has been slapped with a restraining order to protect a retired racehorse after she refused to stop feeding him carrots.

Margaret Porter, 67, thought Nelson the chestnut gelding, which lives in the village of Scruton on the edge of the Yorkshire Dales, was ‘sad looking’ and decided he was under-fed.

She then began giving him carrots despite being explicitly asked not to by his owner Suzanne Cooke, 50.

But Mrs Porter ignored her request, and repeatedly called the police and RSPCA – prompting owner Mrs Cooke to accuse her of a campaign of harassment.

York magistrates heard the dispute over Nelson’s carrots had become the talk of the village with the parish council asked to intervene in the increasingly bitter feud.

You could poison my horse or give it colic and make it ill.

After hearing both sides of the argument on Thursday, magistrates found Mrs Porter guilty and slapped her with a restraining order which bans her from the horse and Mrs Cooke’s home. 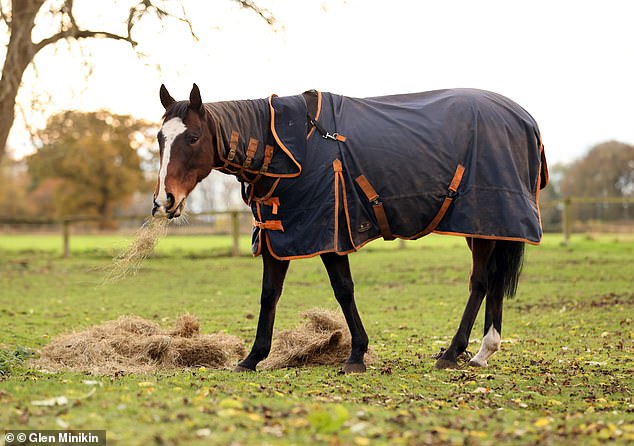 Mrs Porter told the court how she first became involved after passing Nelson’s paddock on the edge of the village.

She said: ‘I saw him standing outside his stables and I thought he looked quite sad.

‘I didn’t examine the horse but I noticed him. The fields were frozen at the time and there was snow on the ground. I passed six or seven times a day and didn’t see his owner with him once.

‘He looked thin and I began speaking to people about my concerns in the hope someone would take it on board and try and get her to look after the horse properly. I was getting quite distressed about the situation.

‘I decided to give him a few carrots at the fence, it never occurred to me that anyone else would be bothered about that, I just didn’t want him starving to death.’

Mrs Porter continued feeding Nelson, which came to Mrs Cooke’s notice when she realised there were dozens of carrot tops lying in his field.

She picked them up in a bucket and confronted Mrs Porter, pointing out that there was a sign on the fence asking people not to feed him.

However, Mrs Porter took no notice and continued to sneak carrots to Nelson, who willingly trotted over to the fence to receive them.

Mrs Cooke told the court: ‘On February 13th this year I was going to my horse when I saw Mrs Porter’s car parked up. She was throwing food into the field and the horse came over.

‘I opened the car window and said ‘why are you feeding my horse? Do you realise what you are doing? You could poison my horse or give it colic and make it ill.

‘She replied: ‘you can ring the police, I’m not bothered.’

‘I am tired of this happening and worried that she may make my horse ill, I don’t know what she is giving it.’

To her horror, an RSPCA inspector then called at her house to tell her he was carrying out a welfare check on Nelson.

The inspector quickly realised that not only was he being well looked after, he was in peak condition having competed three times in professional horse races. 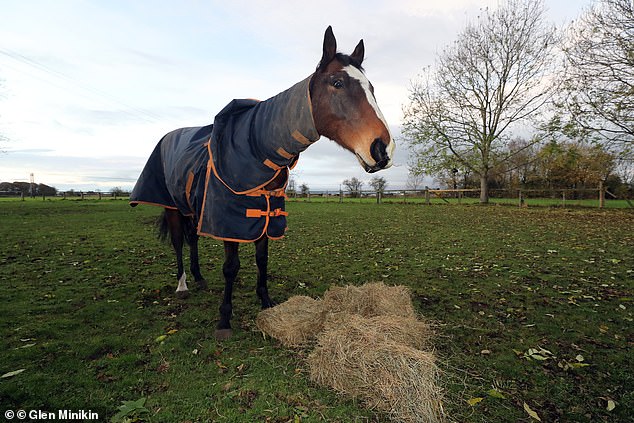 Mrs Porter told the court how she first became involved after passing Nelson’s paddock on the edge of the village. She said: ‘I saw him standing outside his stables and I thought he looked quite sad’ 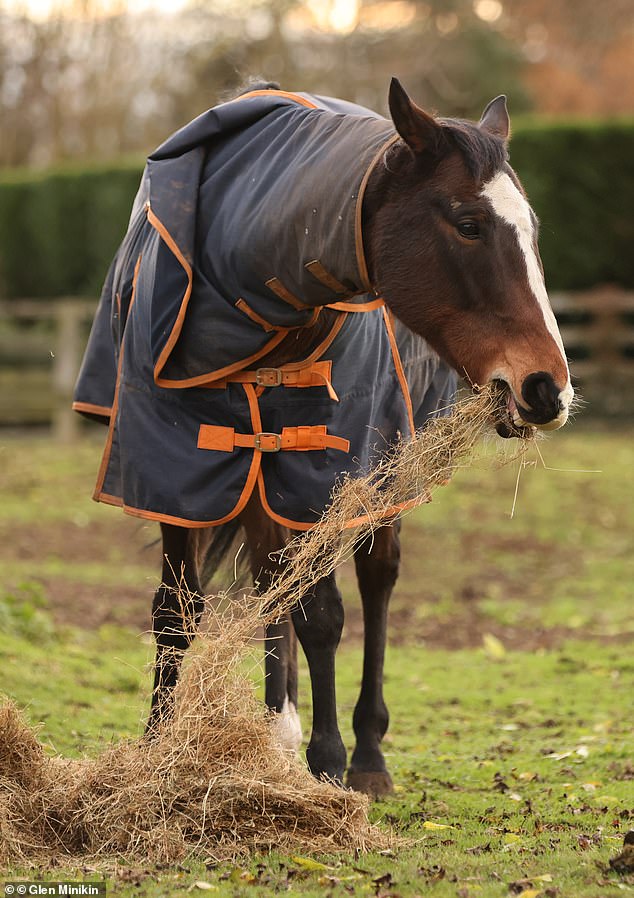 Mrs Porter took no notice of Mrs Cooke’s anger and continued to sneak carrots to Nelson, who willingly trotted over to the fence to receive them 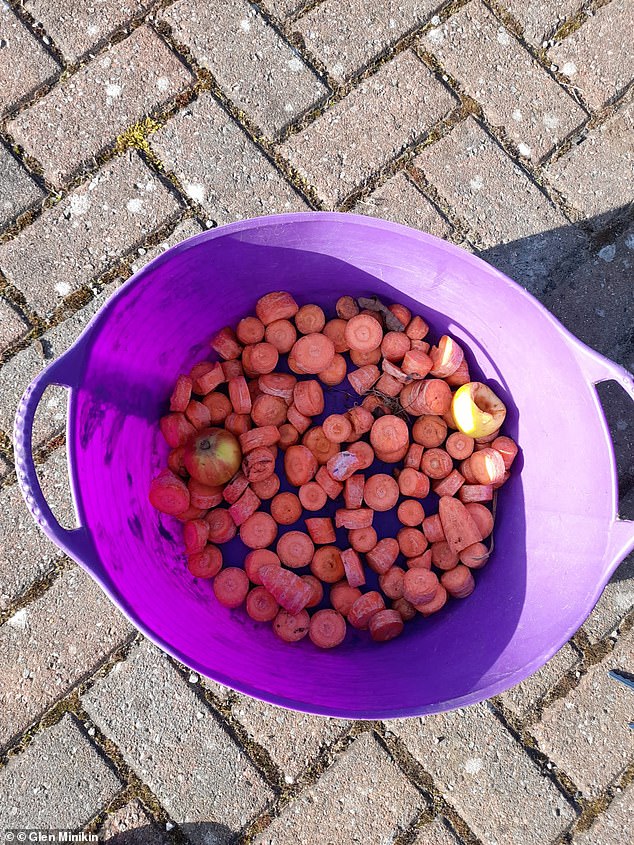 He said: ‘I did not have any concerns about the horse but she must have rang at least 10 times about its welfare, repeating it was under-fed.’

Mrs Cooke said felt she had no option but to call the police and Mrs Porter was eventually arrested, first appearing in court in April when she denied a charge of harassment.

After hearing both sides of the argument on Thursday magistrates found her guilty.

Presiding magistrate Hilary Fairwood said: ‘In the first instance her conduct could be considered laudable in that she truly believed she was trying to prevent the neglect of the horse.

‘However after the RSPCA visit and police intervention she continued despite being explicitly told the RSPCA had no concerns whatsoever.

‘Her conduct was not reasonable and we find her guilty of the charge.’

Mrs Fairwood said it was necessary to impose a restraining order for the protection of Nelson.

Addressed to the defendant, it reads: ‘You must not put food in the field for the horse and must not interfere with the horse in any way.’

Further to that she must not approach Mrs Cooke or attend her home, which is directly across the road from hers.

After the hearing Mrs Porter said: ‘It all seems to ridiculous to be taken to court for giving a horse a few carrots but at least I got to have my say and they didn’t send me to jail.’

Mrs Cooke said: ‘I’m very glad the court passed the order to keep her away from Nelson for his sake.

‘He’s a thoroughbred horse and he’s very well looked after, exercised and fed, he’s a wonderful horse and very much loved by me and my son. 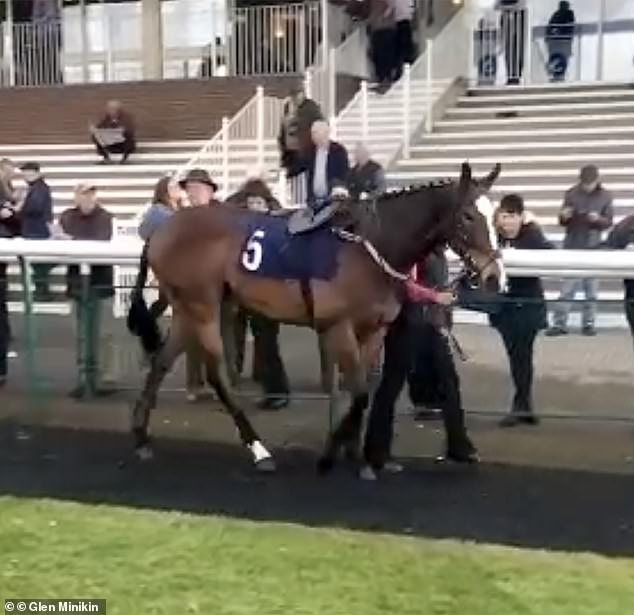 In his racing days Nelson was based at Middlesham, one of the homes of British horseracing

‘This has gone on for a year now and it has caused so much stress and upset for me, it has had the whole village, where I’ve lived very happily for eight years, talking about me.

‘She went out to cause as much difficulty as possible for no good reason. It was horrifying to have the RSPCA called out to do a welfare inspection on Nelson, it made me feel terrible.’

In his racing days Nelson was based at Middlesham, one of the homes of British horseracing.

His racing name was You’redoingwell, however after three winless races he was put out to pasture, before being snapped up three years ago by Mrs Cooke.

In March 2005 Northallerton magistrates heard Mrs Porter lost her temper after her estranged brother, William, laughed at her while driving past in his Land Rover.

She flung three sticks of rhubarb from her cottage window, catching him in the right eye with one of them.

The court ordered Porter to do 40 hours’ community service and barred her from entering property belonging to her son, with whom she has also fallen out.