London: The Queen has cracked jokes about a new life-sized bronze statue of herself during the 94-year-old’s first Zoom call to Australia.

The monarch held the call with South Australian Governor Hieu Van Le, Premier Steven Marshall and sculptor Robert Hannaford to mark the installation of the work in the grounds of Adelaide’s Government House late last year. 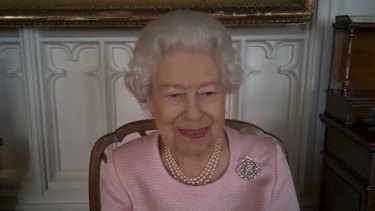 The Queen has held her first Zoom call to Australia.Credit:Buckingham Palace

Speaking from Windsor Castle, the Queen laughed and said “oh, really?!” when Le informed her the statue was “the most popular place for people to take photographs, Ma’am”.

“They feel very close to you, through standing in front of this statue,” he said.

After seeing footage of the statue standing outside the property’s ground-floor windows, the Queen smiled and said: “I would think possibly it might be quite alarming to suddenly see it out of the window. You’d think, ‘gracious, has she arrived here unexpectedly!’.”

Details of the February 24 call were released following a conversation last week between the monarch and National Health Service officials in Britain. In that call, she made a rare personal intervention by saying people hesitant about coronavirus vaccines “ought to think about other people rather than themselves”. 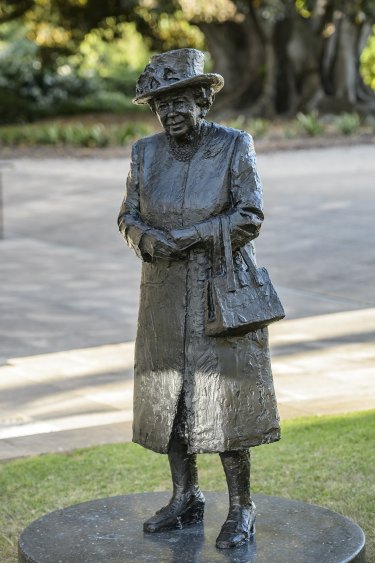 The bronze statue installed in the grounds of Government House in Adelaide is only the third statue of the monarch in Australia.Credit:Buckingham Palace

Prince Philip was not mentioned during an edited video of the call to South Australia provided by Buckingham Palace.

The Duke of Edinburgh was on Monday transferred from King Edward VII hospital to St Bartholomew’s Hospital for further treatment for an infection and a pre-existing heart condition.

Buckingham Palace said he was comfortable and responding to treatment but expected to remain in hospital until at least the end of the week.

Le briefed the Queen on Australia’s COVID-19 vaccination rollout for frontline workers while Marshall told her about how South Australians had followed directions and worked together during restrictions. 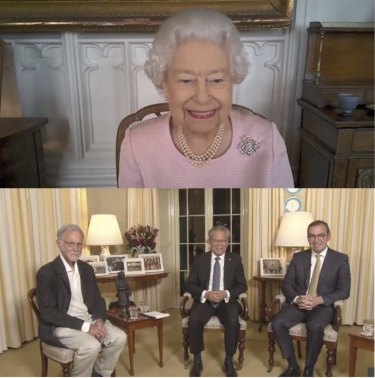 Buckingham Palace said the Queen also heard about the recovery from drought and bushfires in the area at the start of 2020.

Hannaford, who last year held a 30-minute sitting with the Queen at Windsor Castle for the commission, presented her with a scale model which will be sent to Britain as a memento.

”That’s very kind. I’m glad it’s not quite as big as the original statue!” she joked.

The Adelaide statue is only the third of the Queen in Australia; the others are at Government House in Brisbane and Parliament House in Canberra.

The work was funded by a group of private donors.

The Queen has been shielding at Windsor Castle for most of the pandemic and held her first Zoom call in June 2020.

Prince Harry recently told American television host James Corden that he had held Zoom calls with his grandparents “a few times” since moving to the US and laughed that the Duke of Edinburgh ends the calls by closing the laptop.