A woman in China has touched the hearts of millions after being spotted measuring a piece of cloth on a stray cat.

The Good Samaritan was trying to make a coat for the animal ahead of winter, according to an eyewitness.

The 35-second has amassed more than 1.5million views and 130,000 ‘likes’ since it appeared to Douyin, the Chinese version of Tik Tok. 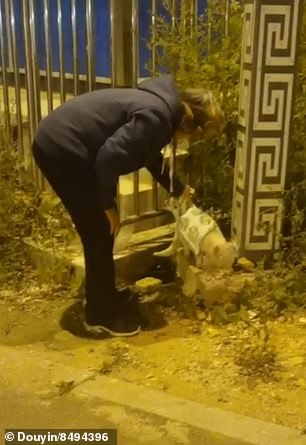 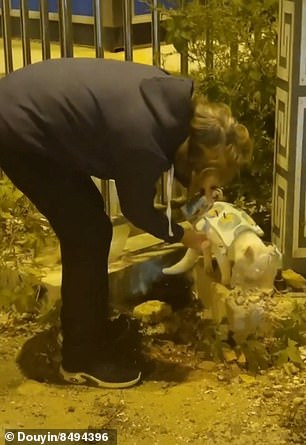 The trending video from China shows the Good Samaritan checking if the cloth would fit the cat. She wanted to keep the stray warm in the winter, an eyewitness who filmed the clip said

Ms Liang said she was taking a stroll with her husband when they saw the woman in her 60s take care of the moggie, which was a regular in the area.

She noted that the temperatures in Qinhuangdao were falling quickly recently, with the lowest dropping below zero degrees Celsius (32 degrees Fahrenheit).

On the night, the temperature was around 10 degrees Celsius (50 degrees Fahrenheit), she added.

Footage shows the kind stranger bending down towards the homeless feline as it was eating food from a plastic bag.

The woman held what looked like a piece of felt and moved it around the cat’s body to see if it would fit. 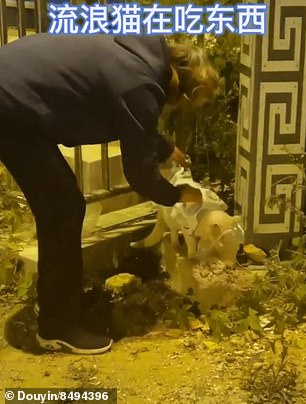 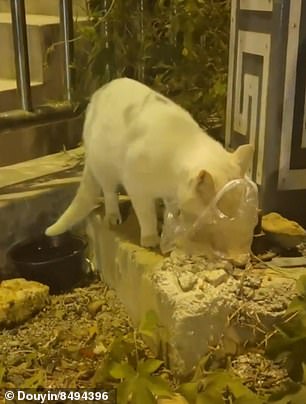 Liang Yi, the video photographer, decided to film the scene after being moved by the woman’s action. The 35-second has amassed more than 1.5million views and 130,000 ‘likes’ in China

Ms Liang said she decided to capture the scene because she was ‘particularly moved’ by the woman’s action, calling her ‘full of love’.

She said she spoke to the Good Samaritan and discovered that the woman was also looking after six stray dogs in the neighbourhood.

Ms Liang is now planning to make a warm bed for the cat after being inspired by the woman. 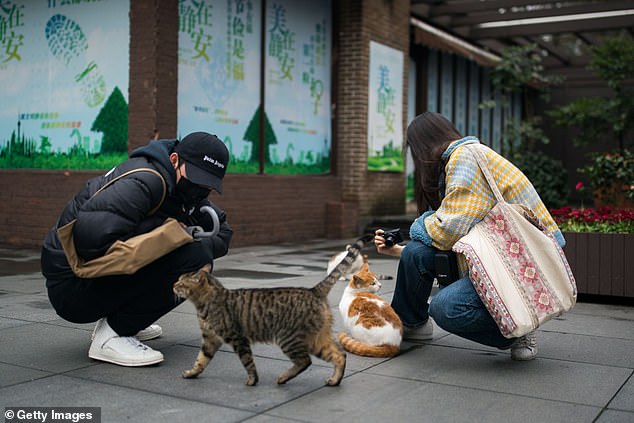 China’s state TV has urged authorities to give small animals legal protection in a commentary on social media. Pictured, a couple play with stray cats in a park on March 9 in Shanghai

While China has laws to safeguard land-based and aquatic wildlife, it currently lacks legislation to protect animal welfare or prevent animal abuse.

China’s Central Television last month called on the government to pass the country’s first animal protection law ‘as soon as possible’ in a rare move from an official media outlet.

The state-run TV station appealed after a man was caught killing a stray cat with boiling water on the street.

‘I would like to urge the public to pay more attention to stray animals,’ Ms Liang told MailOnline.

‘Even if you don’t love them, please don’t hurt them,’ she urged.