Glasgow has become the first city in the UK to start send stolen artefacts which are now museum exhibits back to India.

Seven objects are on the way to New Delhi as part of a historic agreement, including a ceremonial Indo-Persian tulwar (a type of sword), believed to be from the 14th century, and an 11th century carved stone door jamb from a Hindu temple in Kanpur.

A total of 51 items are being returned to India, Nigeria and two tribes in South Dakota, US, but Glasgow first began the initiative in 1998.

Glasgow Life Museums has become the first UK museums service to commit to returning heritage items, which were carefully packed into crates at the Resource Centre yesterday, before being transferred to the Archaeological Survey of India, where they will go on display. 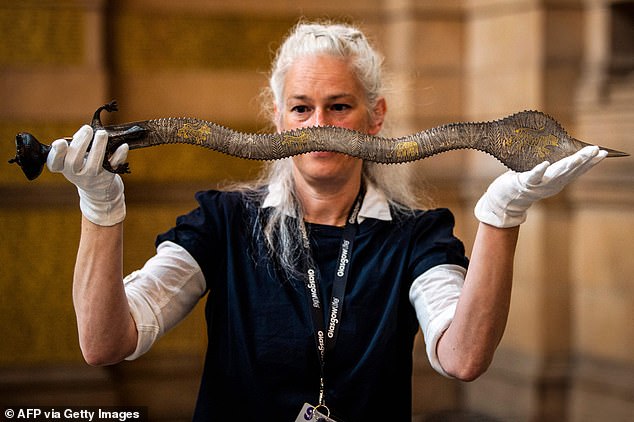 One of the items being is a ceremonial Indo-Persian tulwar (pictured), a type of sword, which is believed to date back to the 14th century 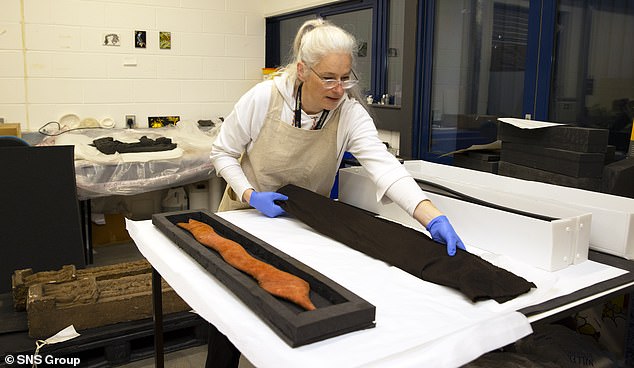 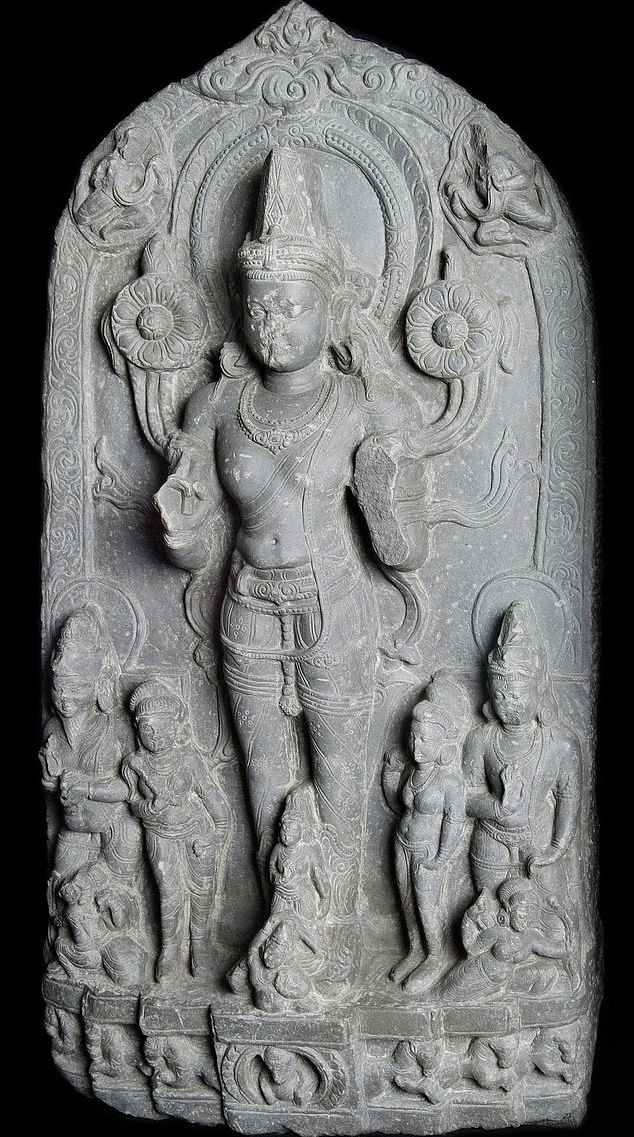 Artefacts including this 10th century black chlorite stele of Surya – the Sun God – from Bihar, were removed from temples and shrines in Northern India during the 19th century 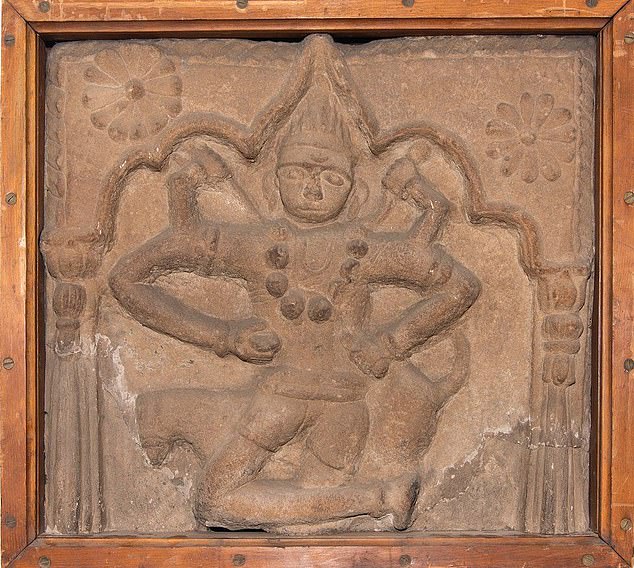 Glasgow Museums is the first UK museum to repatriate stolen artefacts to India. Pictured: One of the seven items set to be returned – a carved sandstone relief of a male fiture and a dog

In August Glasgow Life welcomed dignitaries from the High Commission of India in London for a transfer of ownership ceremony to return the seven items.

Delegates visited Kelvingrove Art Gallery and Museum to sign an agreement confirming the repatriation of the objects, six of which were stolen from temples and shrines across India during the 19th century, the other was bought after a theft from the owner.

All were gifted to Glasgow’s civic museum collections.

The transfer of ownership took place after Glasgow City Council approved a recommendation made in April 2022 to return 51 items to India, Nigeria and the Cheyenne River and Pine Ridge Lakota Sioux tribes in South Dakota, US.

Bailie Annette Christie, Chair of Glasgow Life and Convenor for Culture, Sport and International Relations for Glasgow City Council, said: ‘The physical return of these Indian items marks a milestone for Glasgow.

‘Glasgow has led international repatriation efforts since 1998, when an agreement was reached to return the Lakota Sacred Ghost Dance shirt to the Wounded Knee Survivors’ Association.

‘We must thank the High Commission of India, the British High Commission and the Archaeological Survey of India for their help and cooperation in ensuring the safe return of these objects from Glasgow’s museum collections.’ 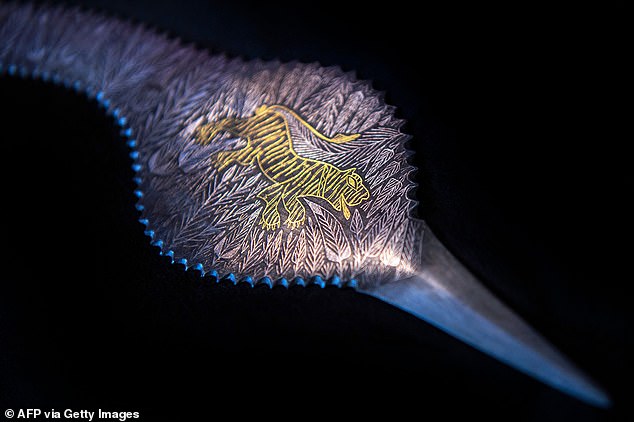 The tulwar was stolen in 1905 from the collection of the Nizam (ruler) of Hyderabad by his prime minister, who then sold it to the British general Sir Archibald Hunter 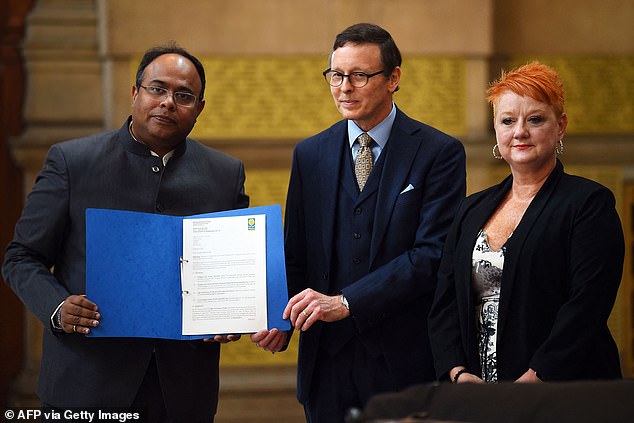 This work has been ongoing since it was established the artefacts – acquired from auctions and as gifts – were taken from sacred sites and ceremonial buildings during the British Punitive Expedition of 1897.

Glasgow Life Museums welcomed a delegation from Nigeria’s National Commission for Museums and Monuments to Kelvingrove Museum in June 2022 to discuss the transfer of ownership and future dates.

Some 25 Lakota and Oceti Sakowin relics sold and donated by George Crager, an interpreter for the Buffalo Bill Wild West Show who visited Glasgow in 1892 – will also be handed back to the Cheyenne River Sioux and Oglala Sioux tribes of South Dakota.

Artefacts were taken from the Wounded Knee Massacre site following the battle of December 1890, while others were named ancestors’ personal belongings or are ceremonial artefacts but encompass beliefs, history and values of the Oceti Sakowin.