Geronimo’s army: Owner says ‘whole planet wants to save alpaca in all-out war’ as officials tell her they will not carry out execution warrant before 5pm today

Geronimo’s owner has warned ministers that the ‘whole planet’ believes he should be saved.

The doomed alpaca can count on an ‘army willing to fight for his survival’, Helen Macdonald added.

‘We will form a ring of steel around Geronimo. It is now all-out war,’ the 50-year-old said from her farm in Wickwar, Gloucestershire, yesterday.

Miss Macdonald made her defiant comments after the High Court threw out a legal challenge to prevent the eight-year-old’s execution.

As of 4.30pm yesterday, officials from the Department for Environment, Food and Rural Affairs (Defra) could enter the farm and put him down.

However, officials told Miss Macdonald last night they would not carry out their execution warrant before 5pm today.

Miss Macdonald said: ‘People have woken up to this and they are angry. 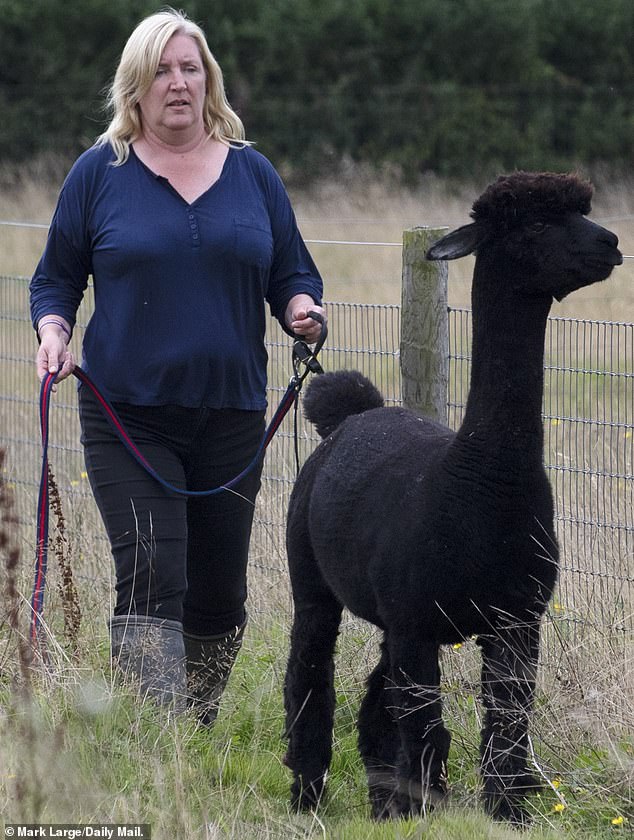 The doomed alpaca Geronimo can count on an ‘army willing to fight for his survival’, owner Helen Macdonald said (pictured together on farm in Wickwar, Gloucestershire)

‘The outrage from people yesterday after Geronimo’s treatment was palpable and there is an army willing to fight for his survival.

‘We will do whatever we need to do to defend ourselves.’

Geronimo’s four-year fight for clemency came after he twice tested positive for bovine tuberculosis (bTB) in 2017.

The High Court judge’s decision means Defra will not be compelled to investigate whether it holds data that suggests bTB tests can be unreliable in alpacas.

Veterinary nurse Miss Macdonald said: ‘There is no need to be doing this. This is a needless slaughter and the whole planet knows it.’

A Defra spokesman said: ‘We are sympathetic to Miss Macdonald’s situation – just as we are with everyone with animals affected by this terrible disease.’