George Michael is STILL making surprise charity donations two years after his death as it is revealed the Wham! singer is yet to get a headstone at the grave he shares with his mother 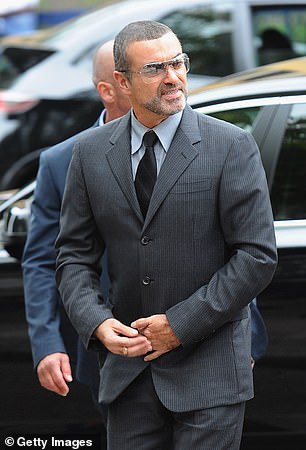 Charities have said they’ve received donations from George Michael two years after his death, but the singer still doesn’t have a headstone to mark his grave

George Michael is making surprise donations to good causes two years after his death – but there still isn’t a headstone to mark his grave in north London.

Both the NSPCC’s Childline and a Los Angeles AIDS charity have said they’ve once again received money from the Wham! singer’s estate.

An NSPCC source said George’s ‘considerable’ donation was ‘out of the blue’ but ‘hugely appreciated,’ reports the Mirror.

American charity Project Angel Food are also said to have received a donation from the star who had given to them since 1993.

Speaking after his death executive director Richard Ayoub said: ‘His quiet generosity helped us, year in and year out, and brought so much goodness to thousands of people we serve.’

The news comes as it was revealed that despite two years having passed since George’s death, there still isn’t a headstone to mark his grave, reports the Daily Star Sunday.

Fans have criticised the fact that no memorial has been given to the singer whose charitable good deeds didn’t come to light until after his death.

While another called Leah argued that although his burial site should be marked, he was a private person and wouldn’t want anything too ‘grandiose.’ 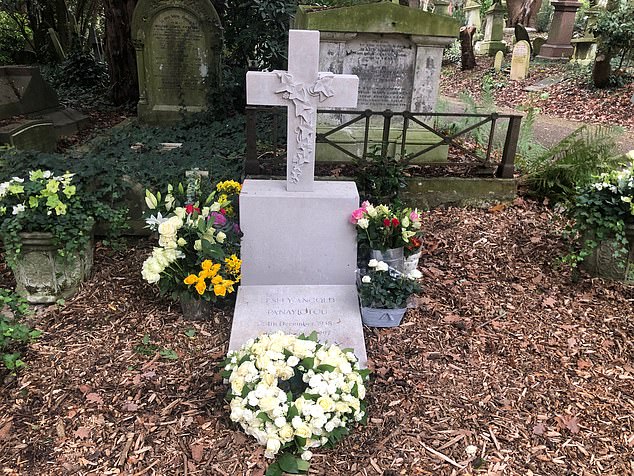 The Wham! singer was laid to rest next to his mother Lesley Panayiotou (her headstone pictured today) at Highgate Cemetery in north London

She said: ‘George seemed intensely private and understated within his private life, so perhaps he didn’t want anything too grandiose.

‘His place of burial should be marked in some way though.’

The singer, who died on Christmas Day in 2016, was laid to rest at Highgate Cemetery, north London, in March 2017 next to his mother Lesley Panayiotou.

The plot is marked by a grey stone cross and is surrounded by simple white flower blossoms.

Families are usually advised to leave the ground to settle for a year before putting a gravestone on a plot.

In a Christmas message to George’s adoring fans on his website, his family said it was really ‘heartening’ to see people ‘paying it forward’ with good deeds but no mention was made of the gravestone issue.

They wrote: ‘We have all tried to ‘pay it forward’ this year in the form of good deeds, and kindnesses, as we know many of you have too, which we are really proud of, and encouraged by.

‘In the face of disappointments, feeling that good people are doing only their best out in the world, in Yog’s name is really heartening.’ 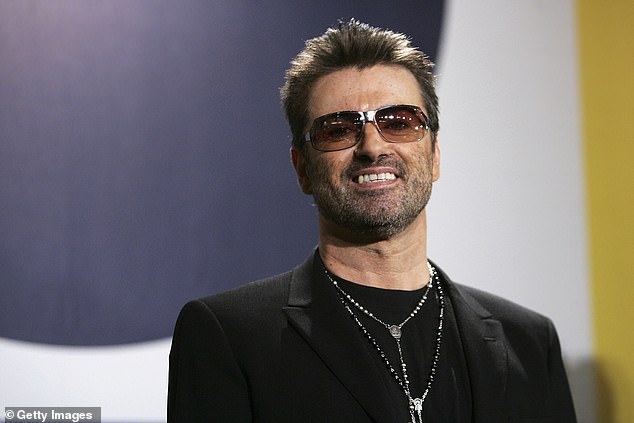 After George’s death it was revealed that he’d given huge amounts to needy causes – including £15,000 to a woman he saw on TV and a £5,000 tip to a barmaid who had student debt.

Hours after his death was announced, TV presenter Richard Osman revealed that Michael had called a woman who appeared on Deal or No Deal to give her the money she needed for IVF treatment.

Osman tweeted: ‘A woman on ‘Deal Or No Deal’ told us she needed £15k for IVF treatment. George Michael secretly phoned the next day and gave her the £15k.’

A woman called Lynette Gillard replied to Richard’s tweet, saying: ‘For many years I wondered who had donated this money, and now I know. Thank you. RIP George what an amazing person.’

A journalist meanwhile tweeted that the star had given a barmaid a huge tip after learning she was a student nurse who had large debts.

The star donated royalties from some of his biggest selling singles and has made huge donations to Childline, the Terrence Higgins Trust and Macmillan Cancer Support.

Childline founder and president Dame Esther Rantzen revealed that Michael had given the royalties from his 1996 number one single Jesus To A Child to the charity.

She said: ‘For years now he has been the most extraordinarily generous philanthropist, giving money to Childline, but he was determined not to make his generosity public so no-one outside the charity knew how much he gave to the nation’s most vulnerable children.’