The US President was disinvited to John McCain's funeral earlier this year but funeral planners are seeking to avoid the similar type of anti-Trump sentiment that took place. 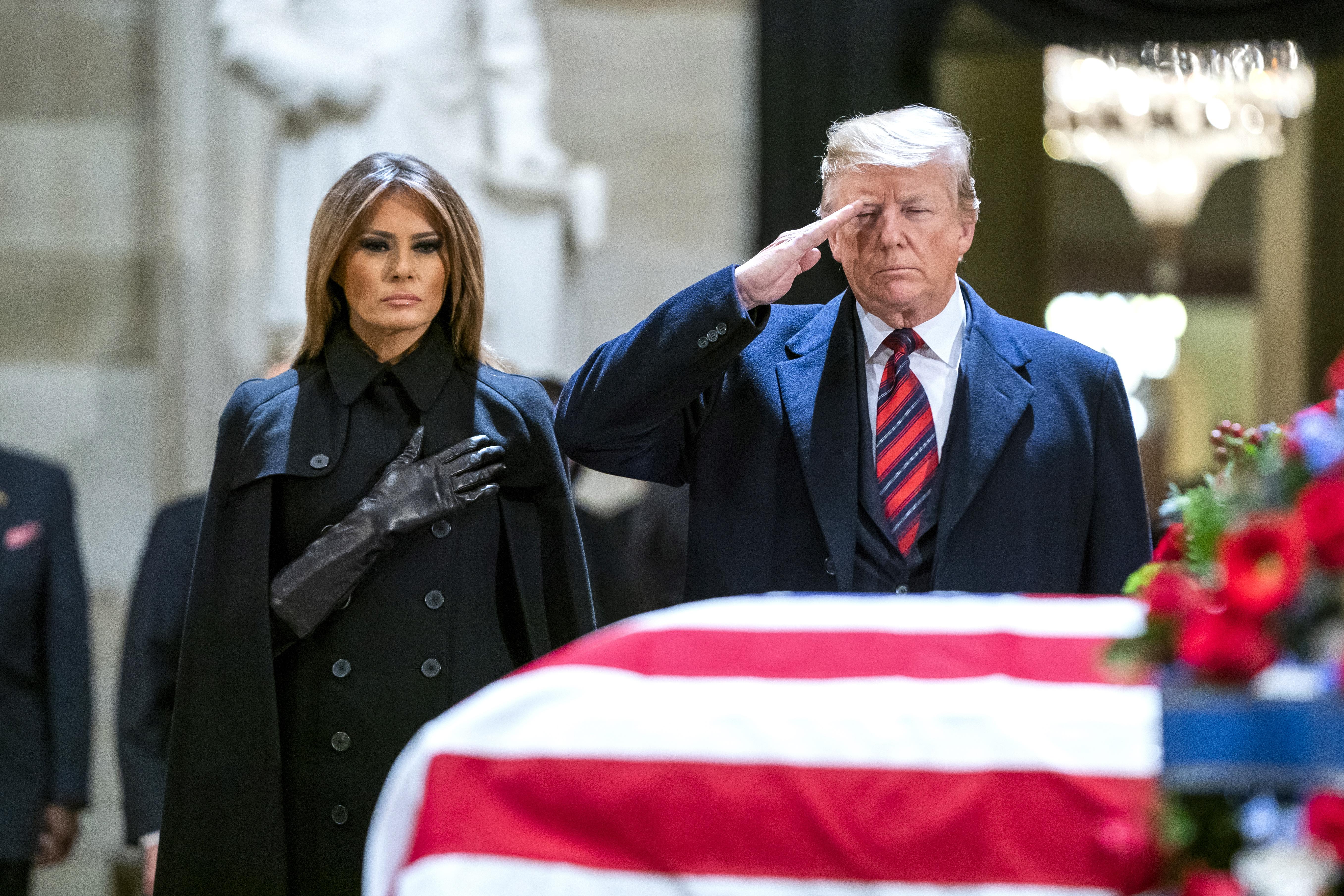 Trump has a fractured relationship with the Bush family after he slammed George W. Bush for both the Iraq War and 9/11 and labelled Jeb Bush "low-energy".

But, since the passing of George HW Bush, Trump has been praised for his glowing remarks about the late former president.

According to The Washington Post, The Bush family were keen to ensure a truce which would honour the nation's 41st President without focusing on current political culture.

As the current President, Trump also has the final say over important funeral details including providing Air Force One to carry the former president’s remains. 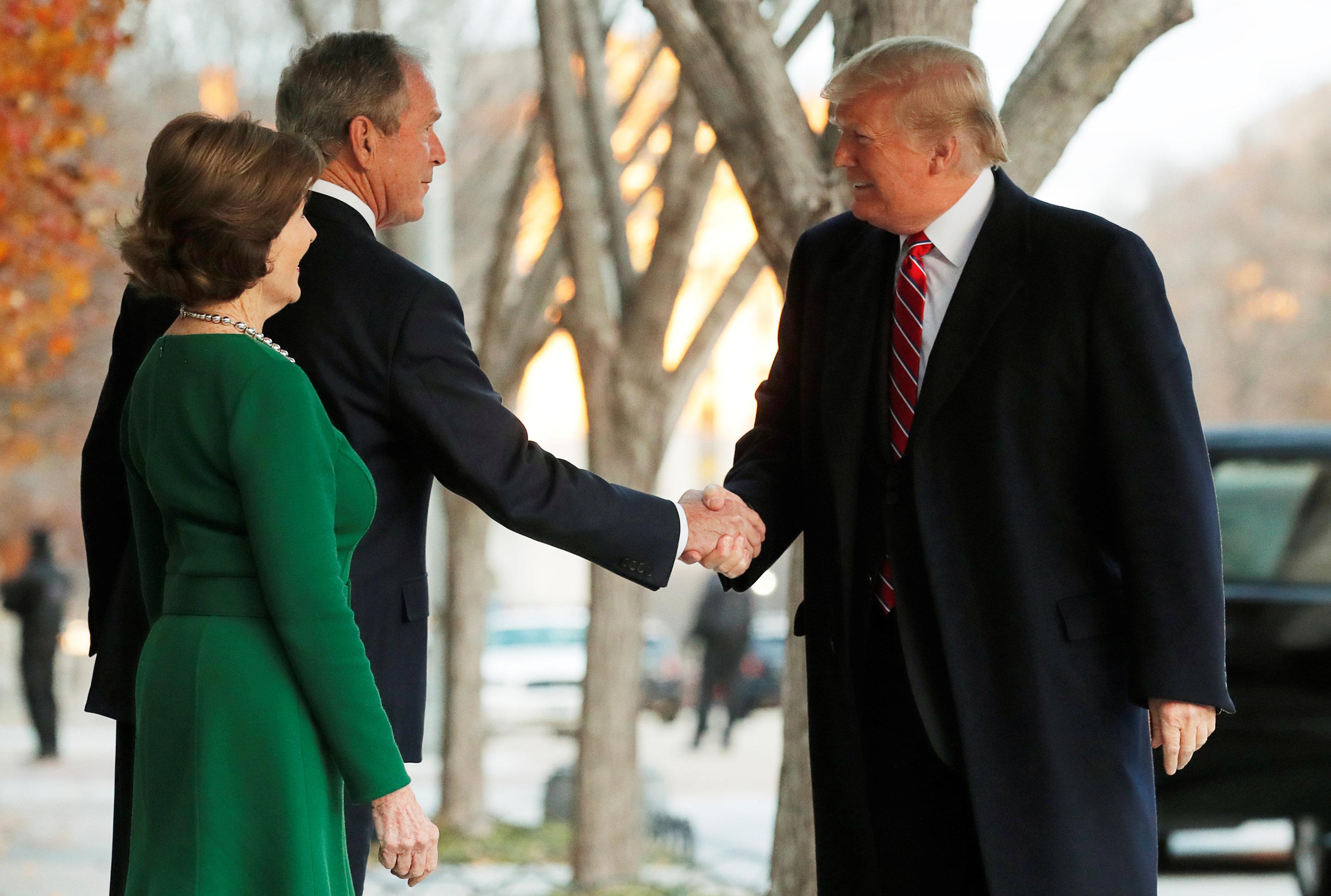 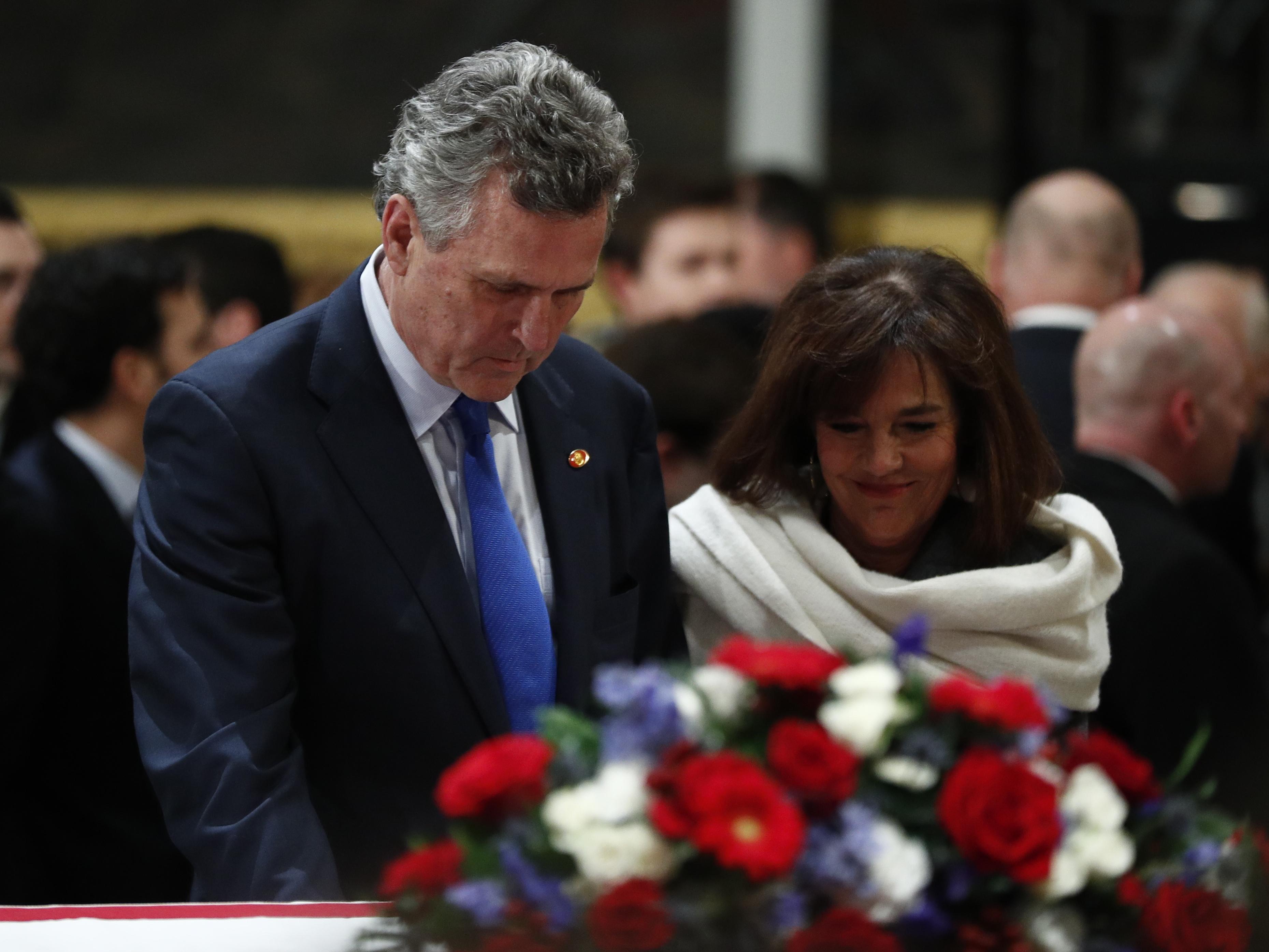 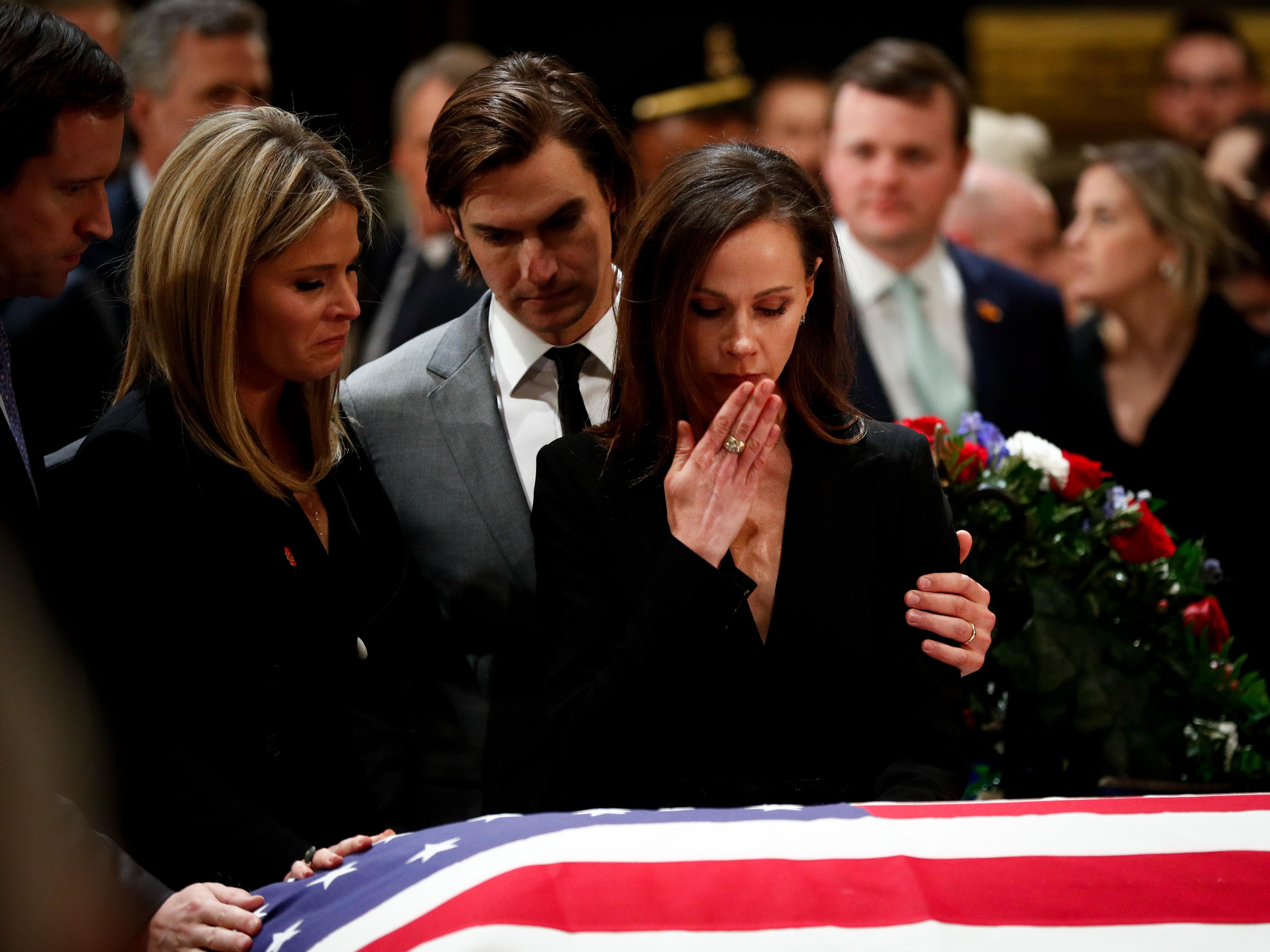 Trump is not expected to speak at the service but he will be seated in the front row alongside former presidents Barack Obama, Bill Clinton and Jimmy Carter.

None of the eulogists are expected to mention Trump with Simpson telling the Post that the memorial service for Bush was neither the time or place to get into politics.

Simpson said: "If you have a sensitivity for human feelings, you just don’t get into that. It’s not what a funeral is for." 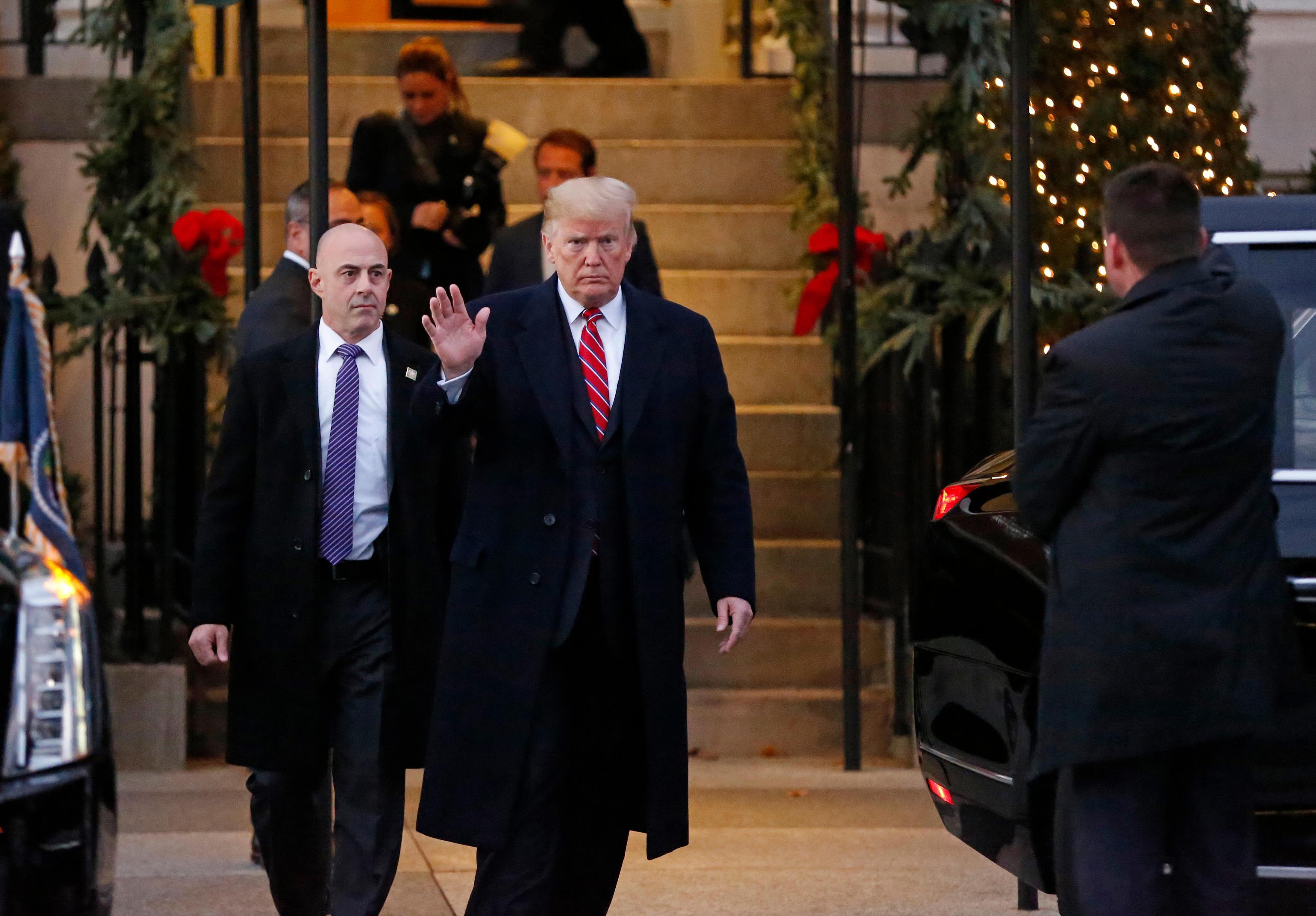 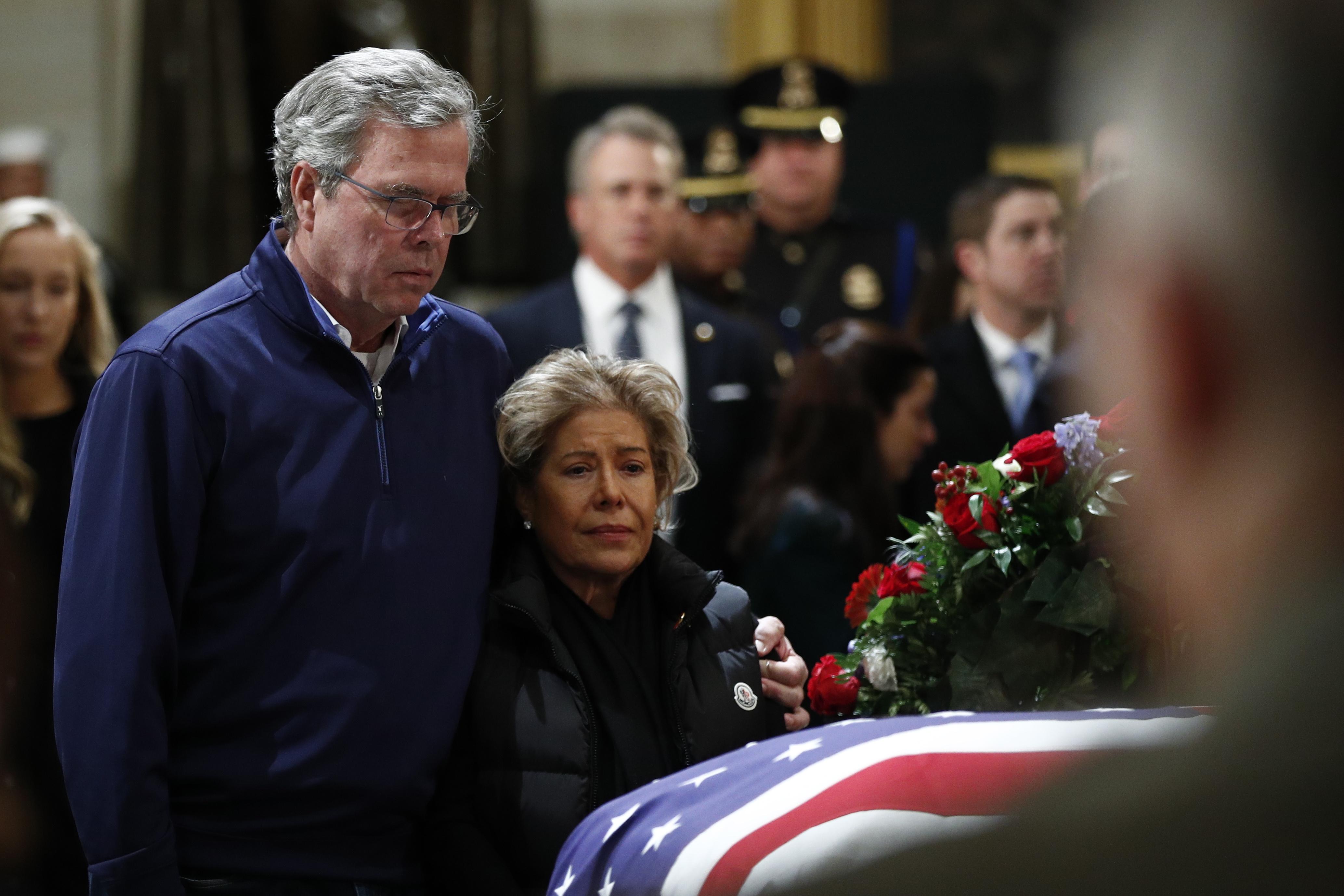 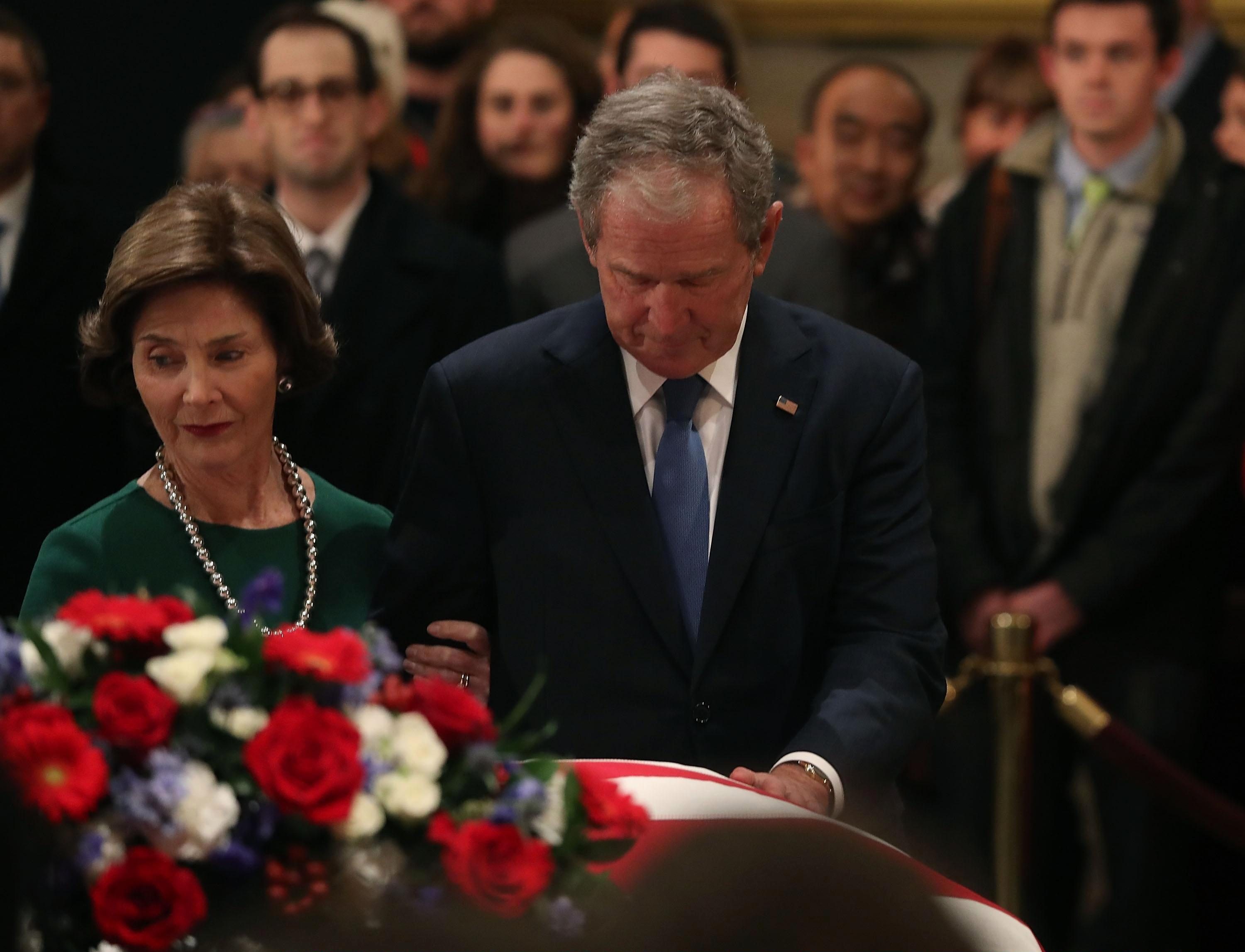 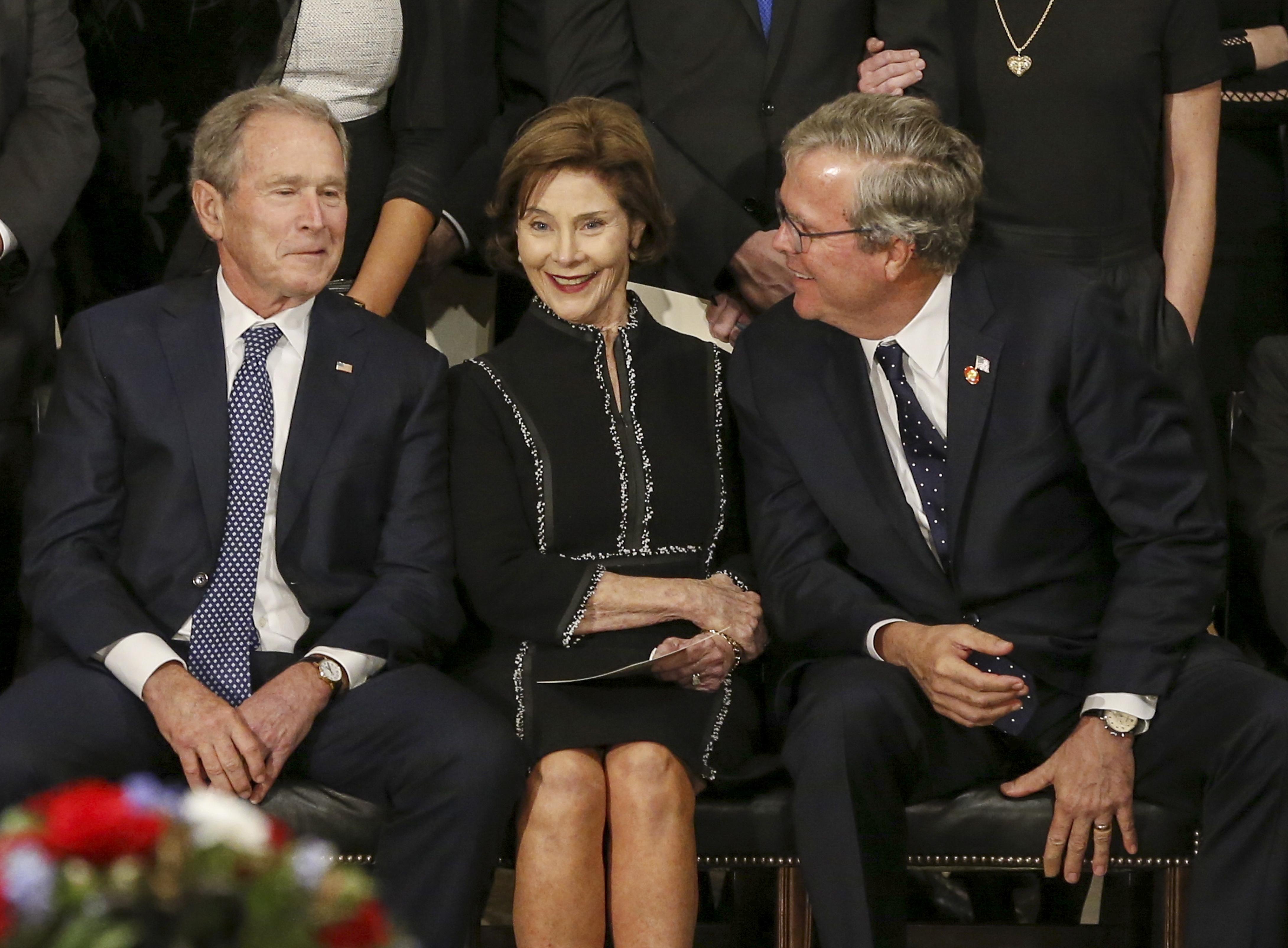 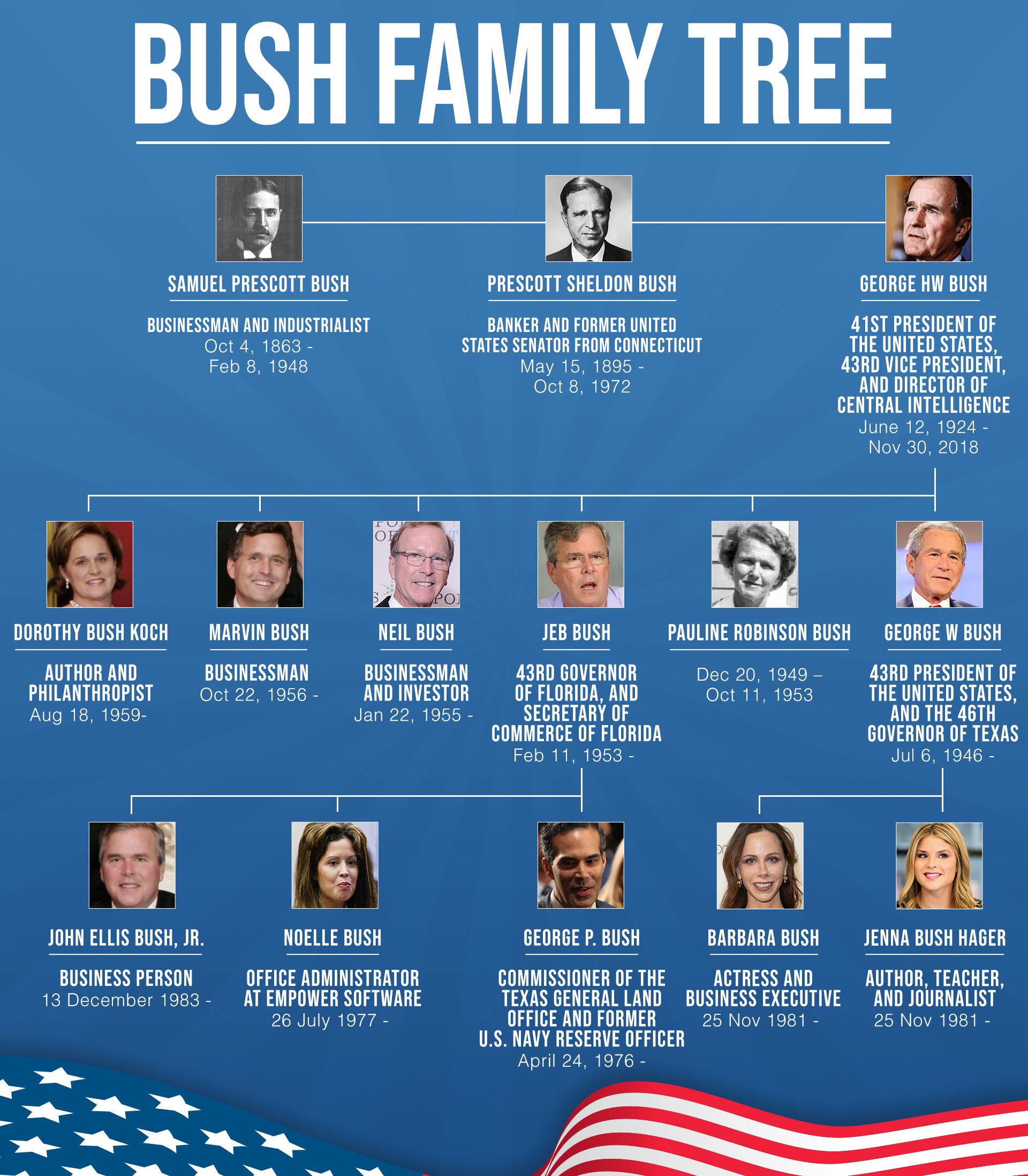 The President has had nothing but praise for Bush since his passing, describing him as "just a high-quality man who truly loved his family" and a "terrific guy" who will be missed.

Trump and Melania arrived at the U.S. Capitol to pay their respects and were warmly greeted by George W Bush and his wife Laura at the presidential guest quarters, Blair House.

The billionaire businessman had been at war with the Bush family politically for years, with Trump once mocking Jeb Bush as "low-energy" in 2016.

In the past, he's also accused George W Bush of failing to protect the country against the 9/11 terrorists and he criticised George H.W. Bush’s "thousand points of light" phrase. 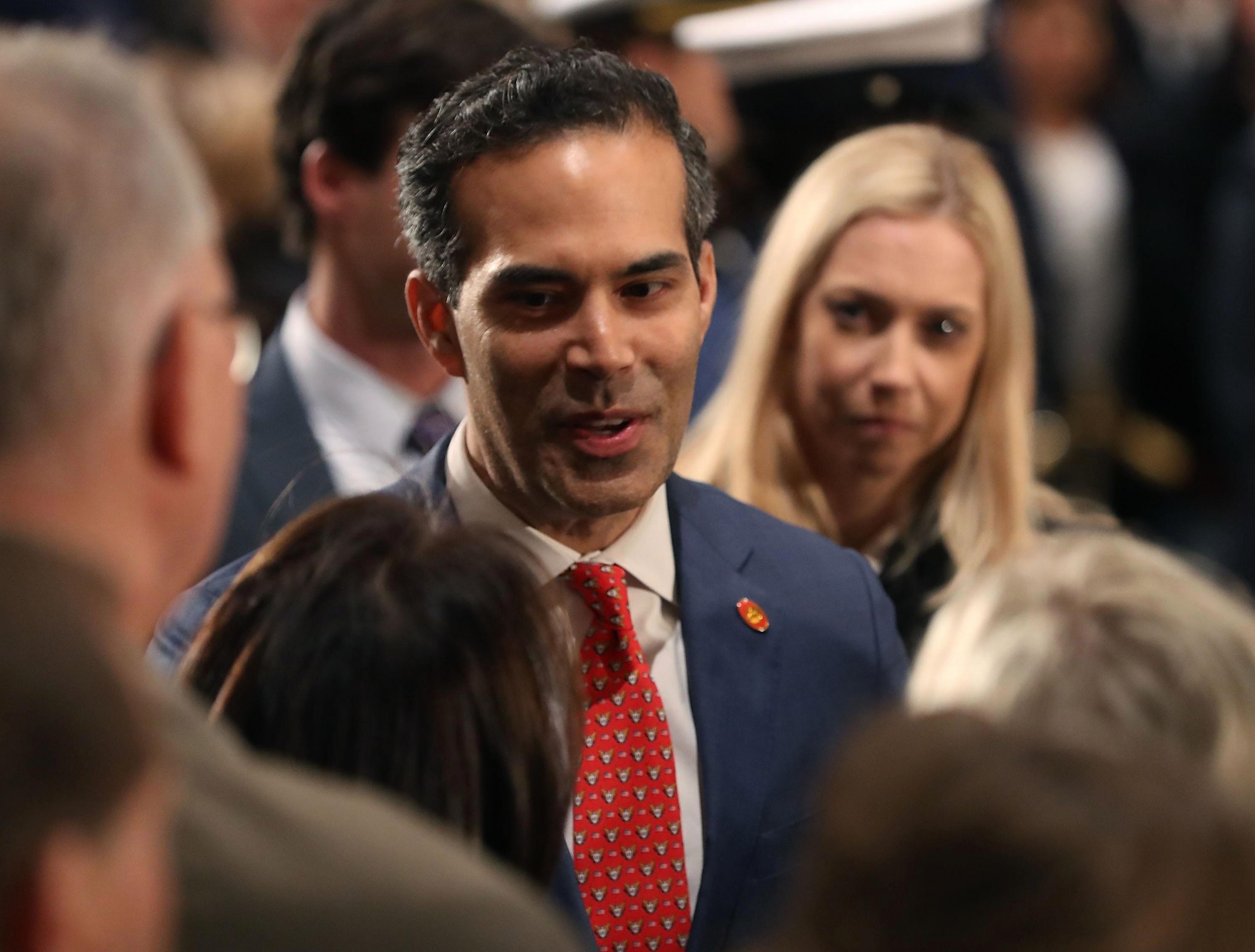 Billy Bush blasted for visiting the remains of George H.W. Bush in trainers

Disgraced NBC anchor Billy Bush turned up to mourn the death of his war veteran uncle and former President George H.W Bush – in a pair of white trainers.

Dressed casually and without a tie, Bush appeared to hold back tears and watched on with other family members as the presidents' coffin was draped in the stars and stripes.

The public watched on as the family stood in silence for a few moments under the Capitol Dome before departing.

Bush hit the headlines during the 2016 presidential campaign when a tape surfaced of an interview with Donald Trump. During the audio, the president could be heard making lewd comments on how he treated women.

Bush can be heard laughing on the tape and also joined Trump in a discussion about the appearance of actress Arianne Zucker, who they were both about to do an interview with.

Then a senior anchor on NBC’s ‘Today Show’, Bush was fired following the incident and has largely remained out of the public eye since. 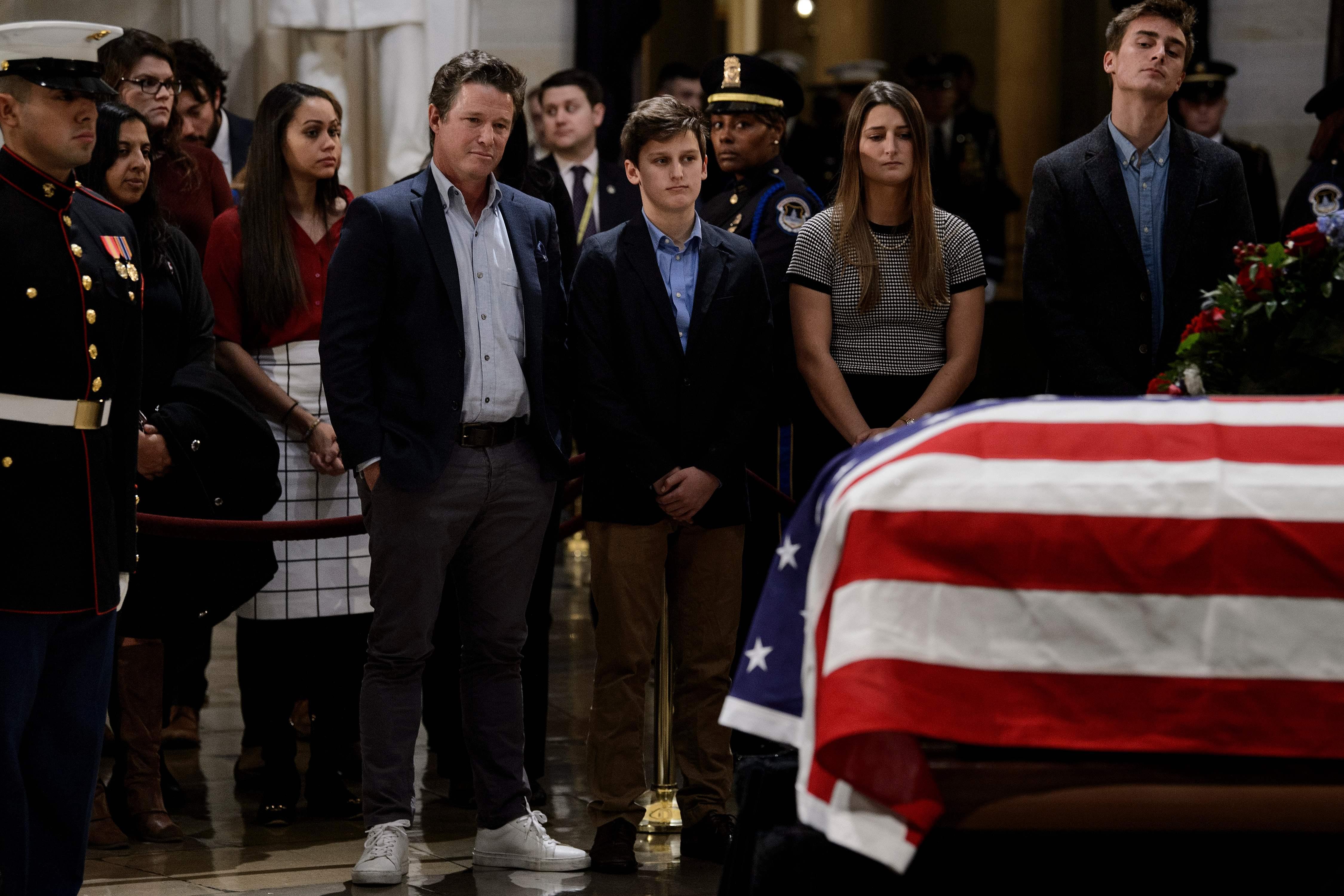 Despite this, George P. Bush, the son of former Florida Governor Jeb Bush, revealed that his late grandfather would have wanted Americans of all political views to unite during his funeral.

Speaking to CNN, Bush said: "Whether it's him or his staff, I know, and my grandmother, they all wanted all current occupants to be a part of this process."

"We can put politics aside and focus on the greatness of our country and devotion to causes greater than ourselves.