The ex President was buried at his presidential library at Texas A&M University at a private family service. 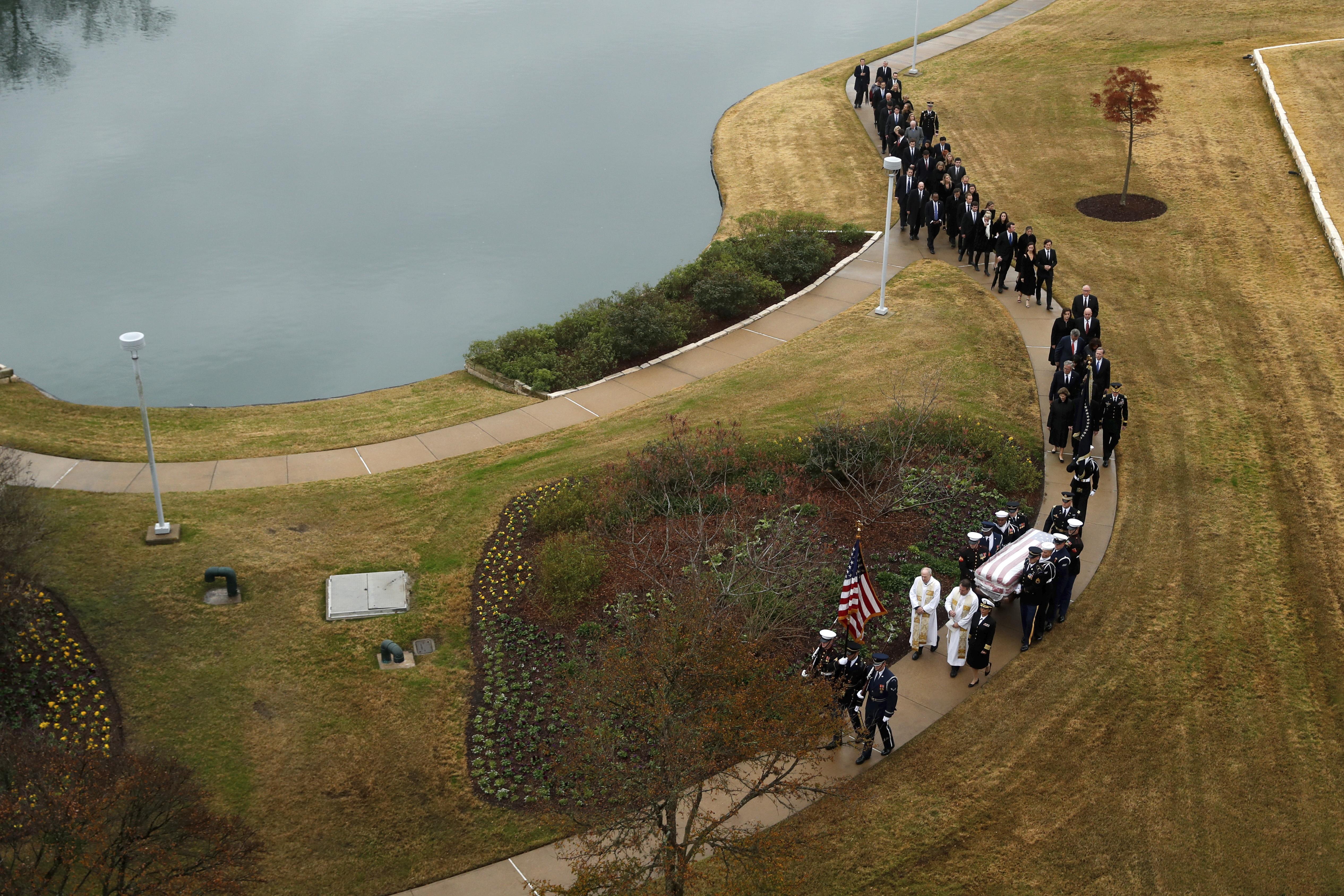 His flag draped casket, carried by a military honour guard, passed through five towns on its way to his final resting place.

Thousands of uniformed cadets saluted along the street that led the way to graveside.

Earlier, his body arrived aboard a presidential train at the library where his family said their final goodbyes.

He was then laid to rest next to his wife, Barbara, who died in April, and his daughter Robin, who died at age three in 1953. 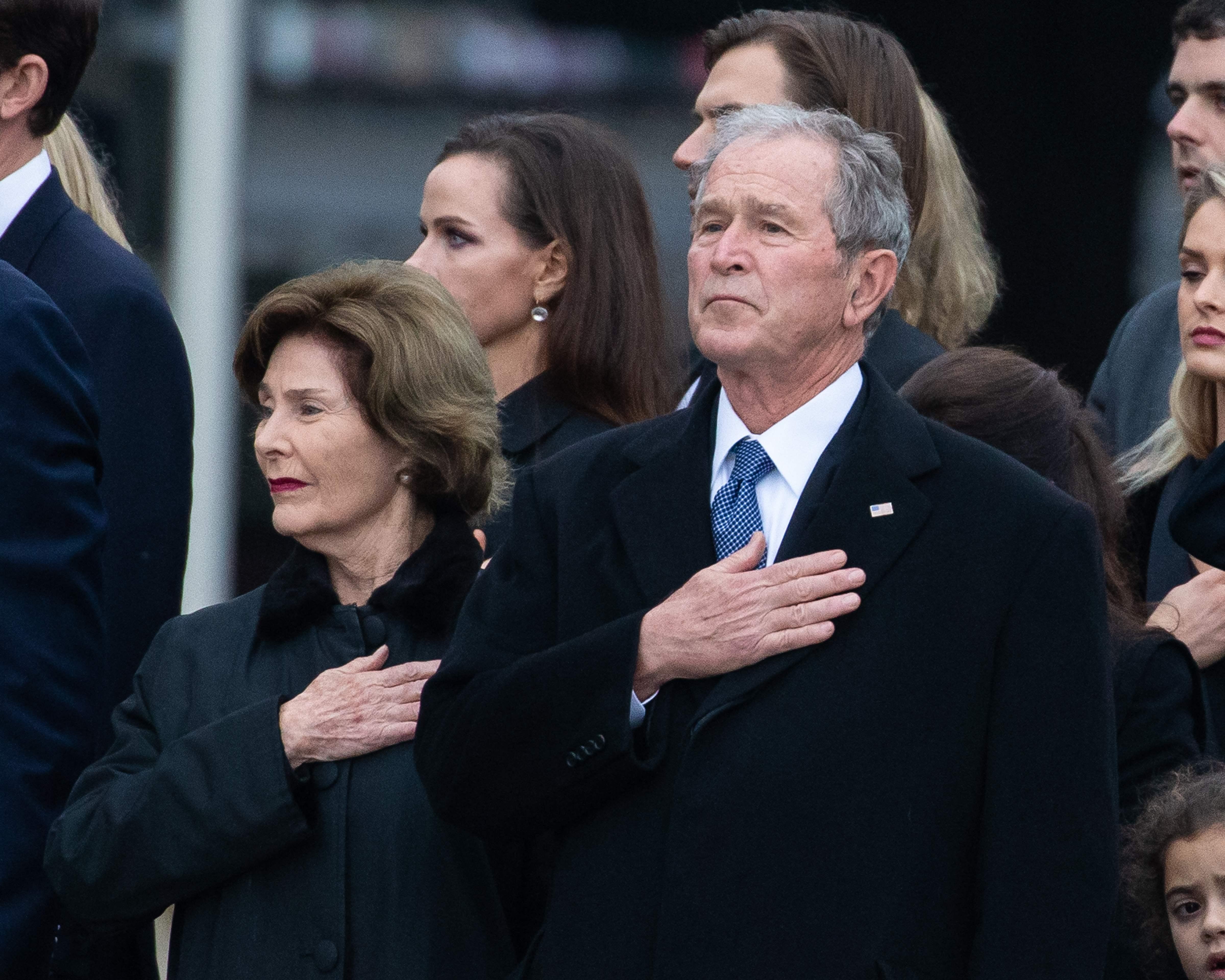 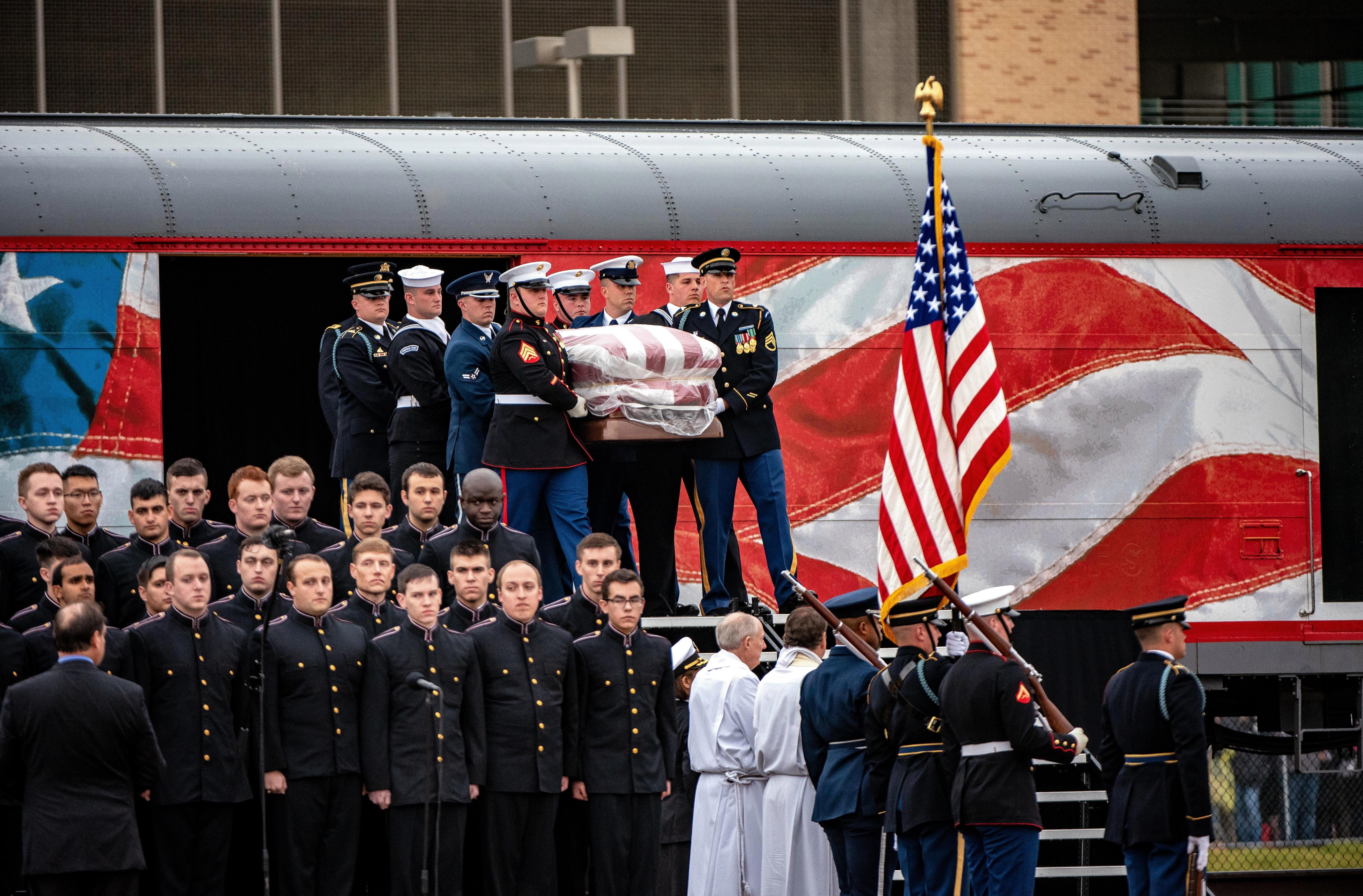 Earlier, Thousands of flag waving well-wishers had turned out earlier as his motorcade travelled 70 miles to Houston.

Bush's grandsons were pallbearers and his granddaughters read scripture at the service, in front of around 1,200 guests.

George P. Bush, the late president's grandson, said: "He was the most gracious, most decent, most humble man I will ever know."

A church choir sang 'This is My Country' and the National Anthem played on pipe organ.

The US Navy conducted a jet fighter flyover, honouring his service as a salute to the World War II Navy pilot, and this was followed by a 21-gun cannon salute on the ground. 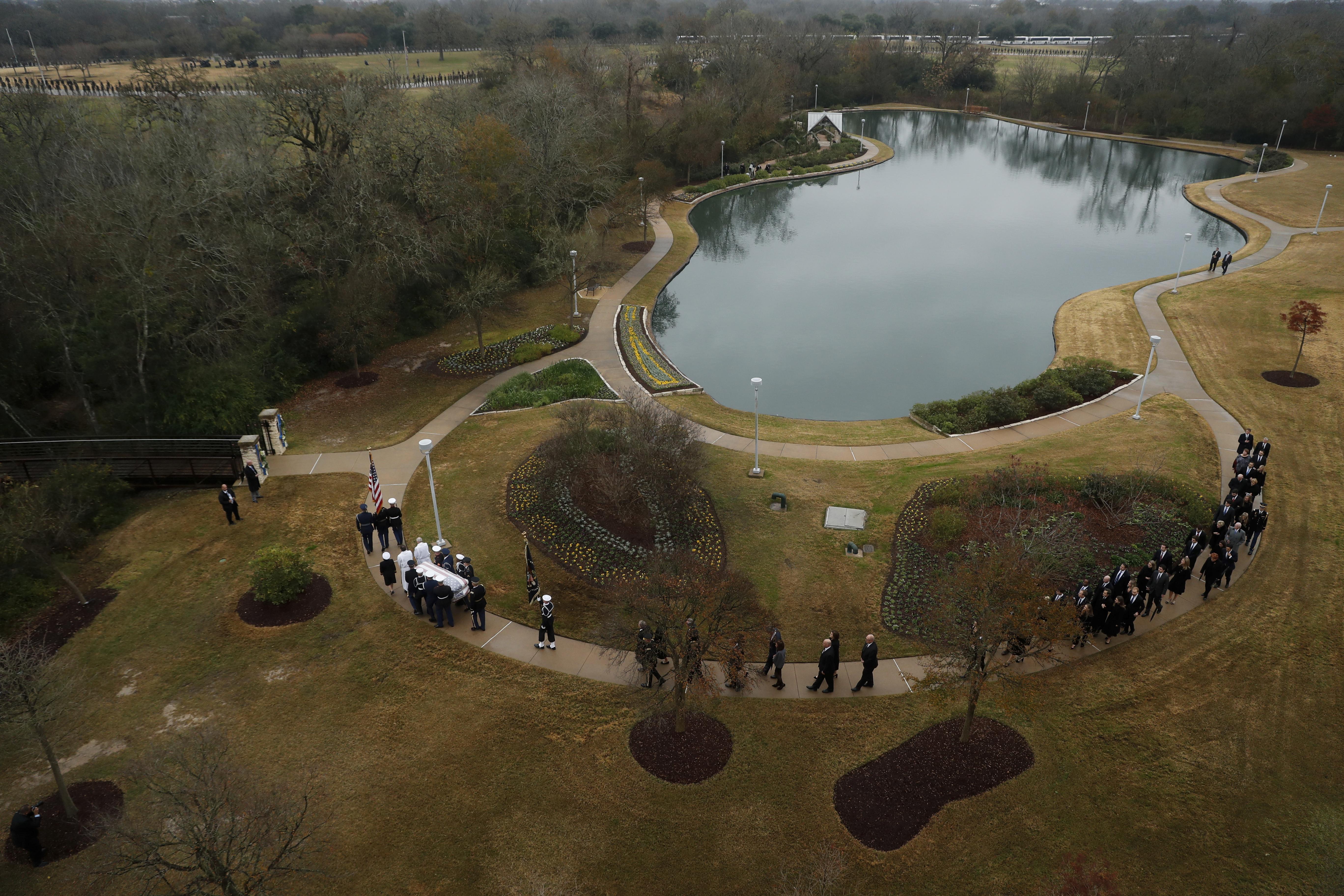 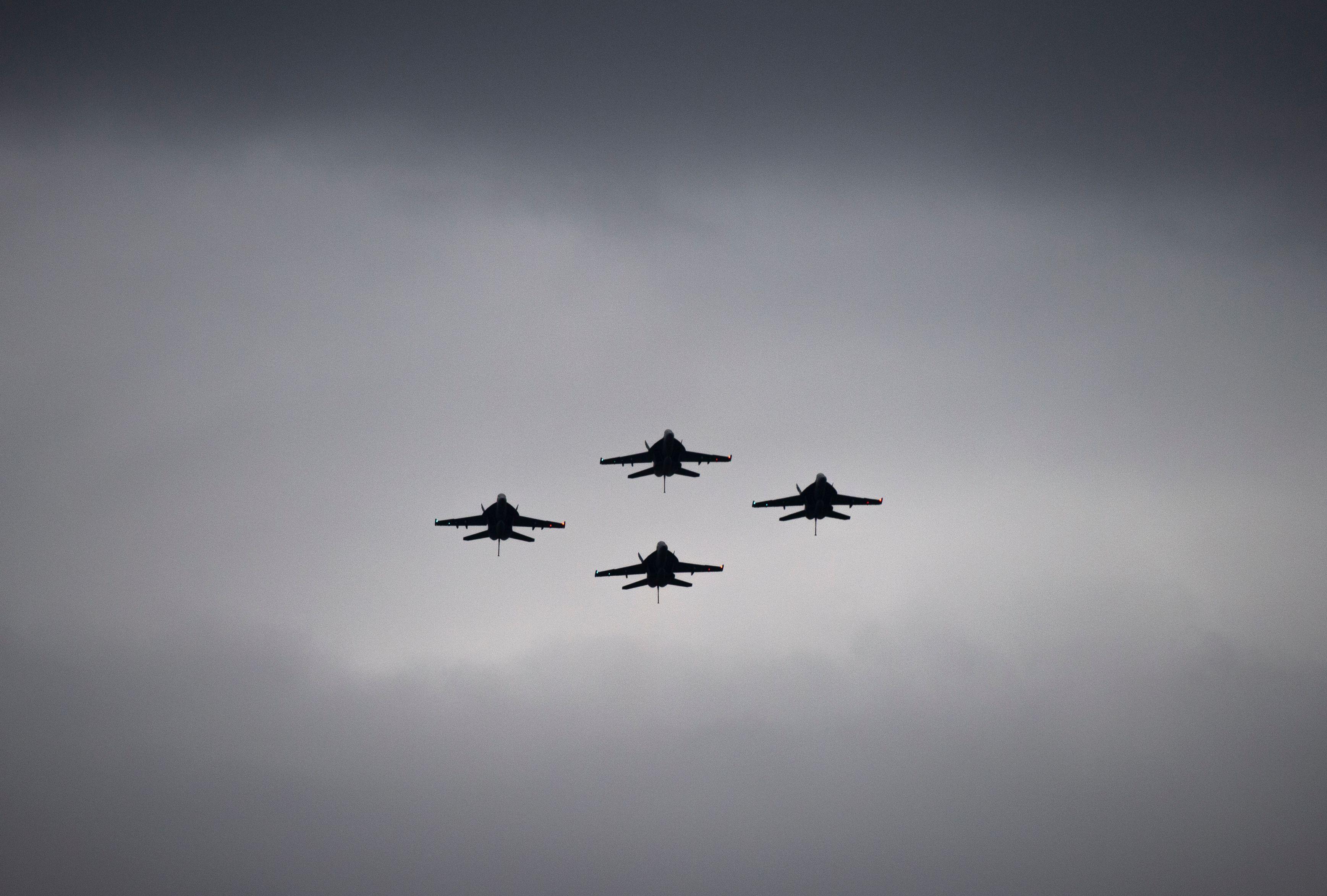 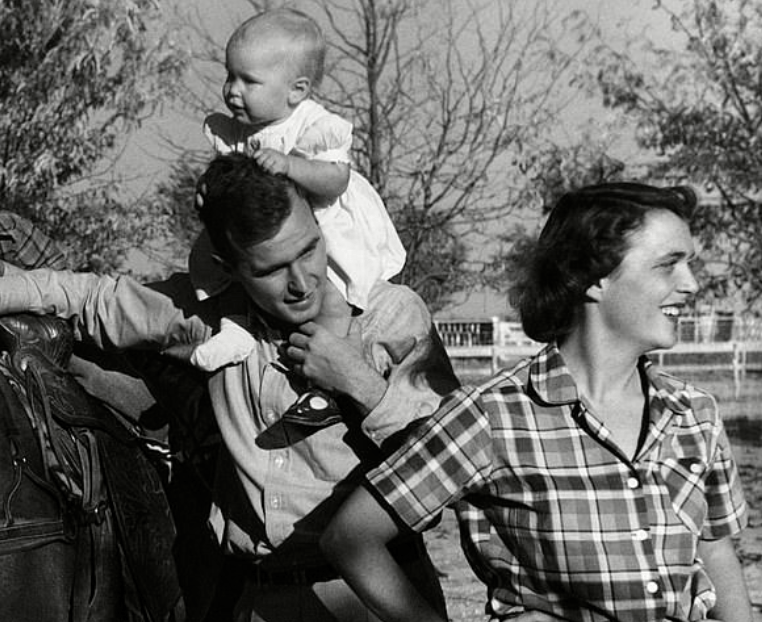 After lying in state in DC,  Bush had a funeral at the Houston church where he and his family worshipped for 50 years.

A service, held at St. Martin's Episcopal Church in Houston, featured Arnold Schwarzenegger – who paid tribute to the man who gave him his "big break" in politics.

The ex-governor of California arrived in Texas for the ceremony with girlfriend Heather Milligan.

In a statement, Scharzenegger said of the former president: "I count myself lucky for many reasons; but for the opportunity to call George Bush a mentor, I can’t help but think I’m the luckiest man in America." 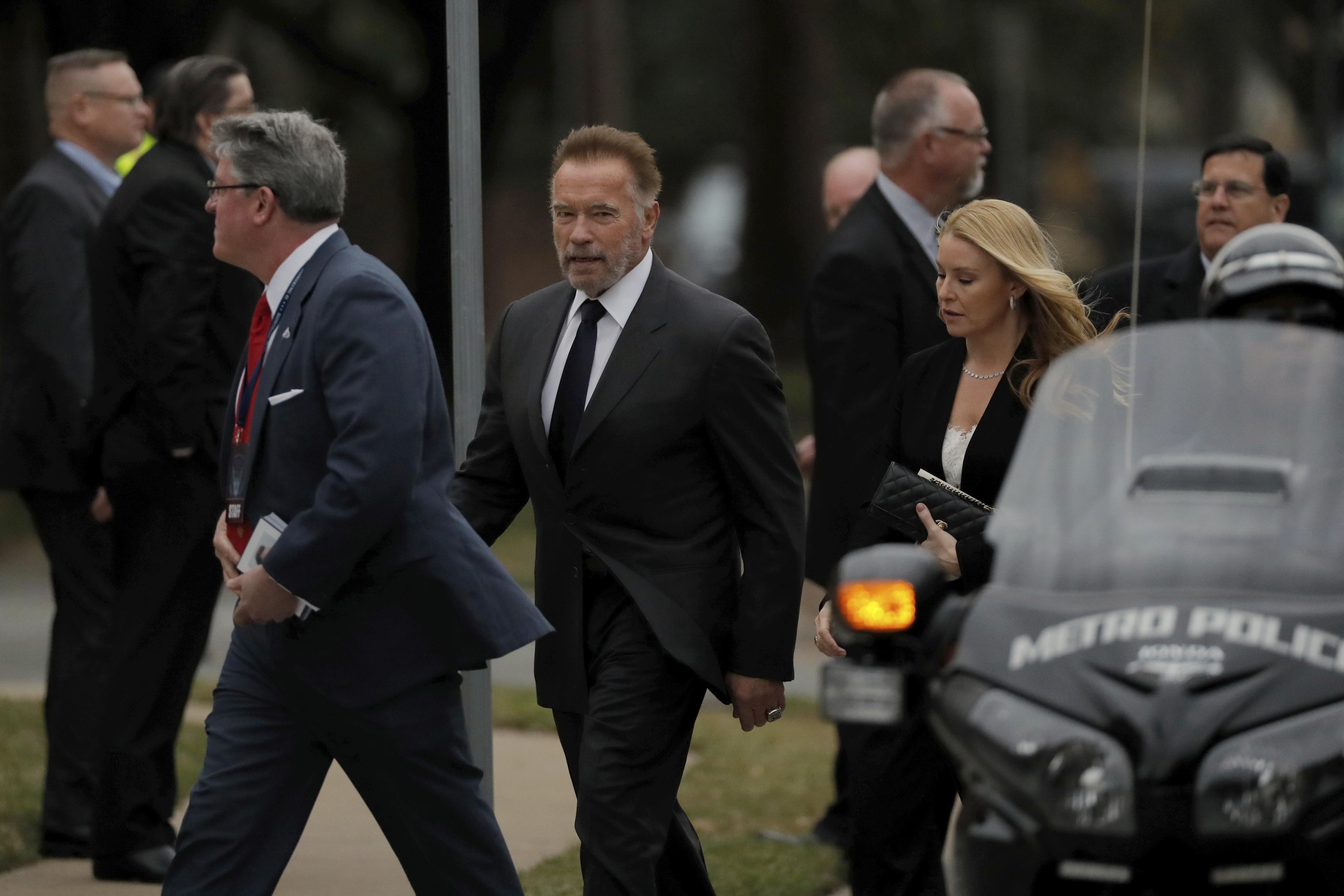 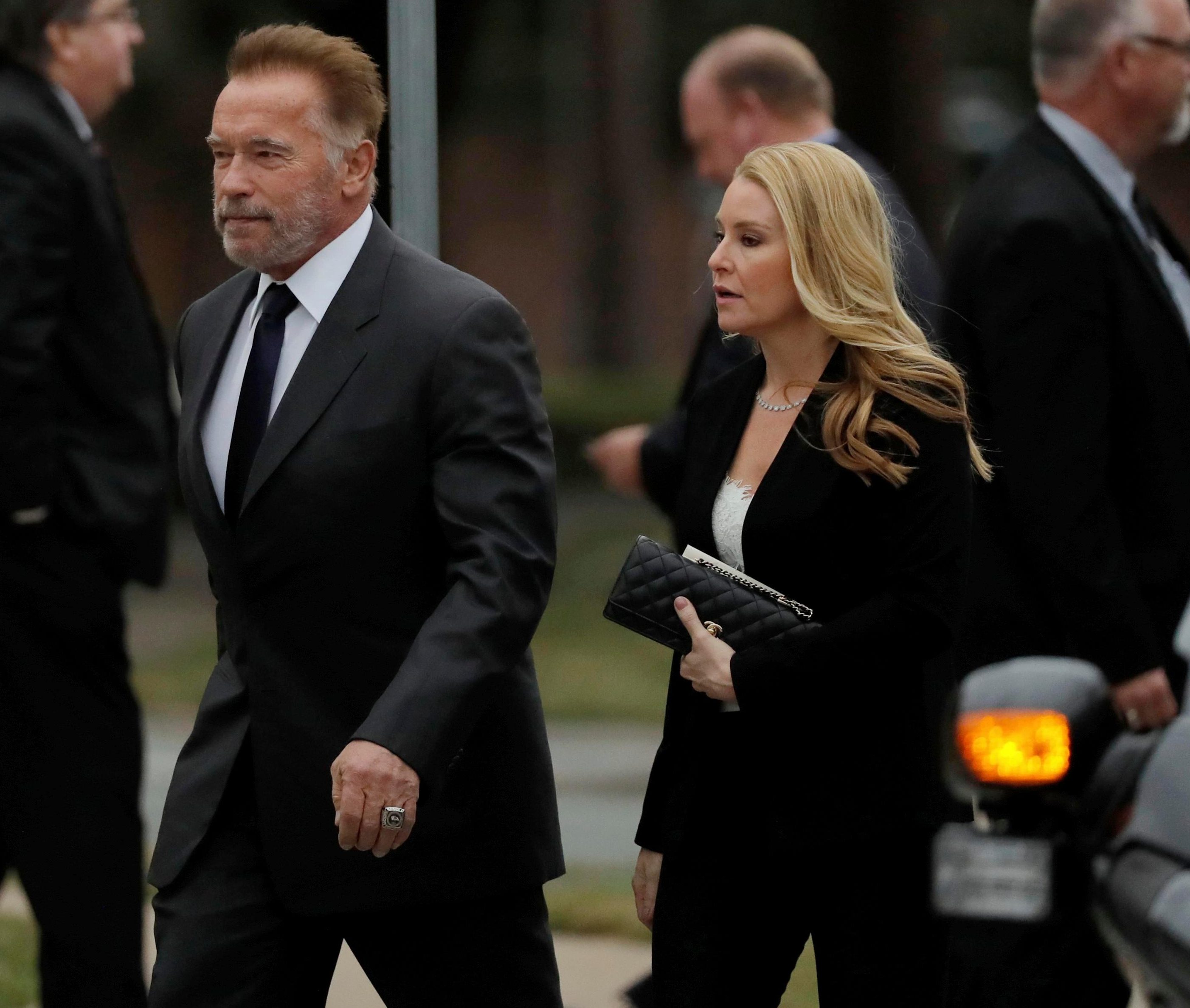 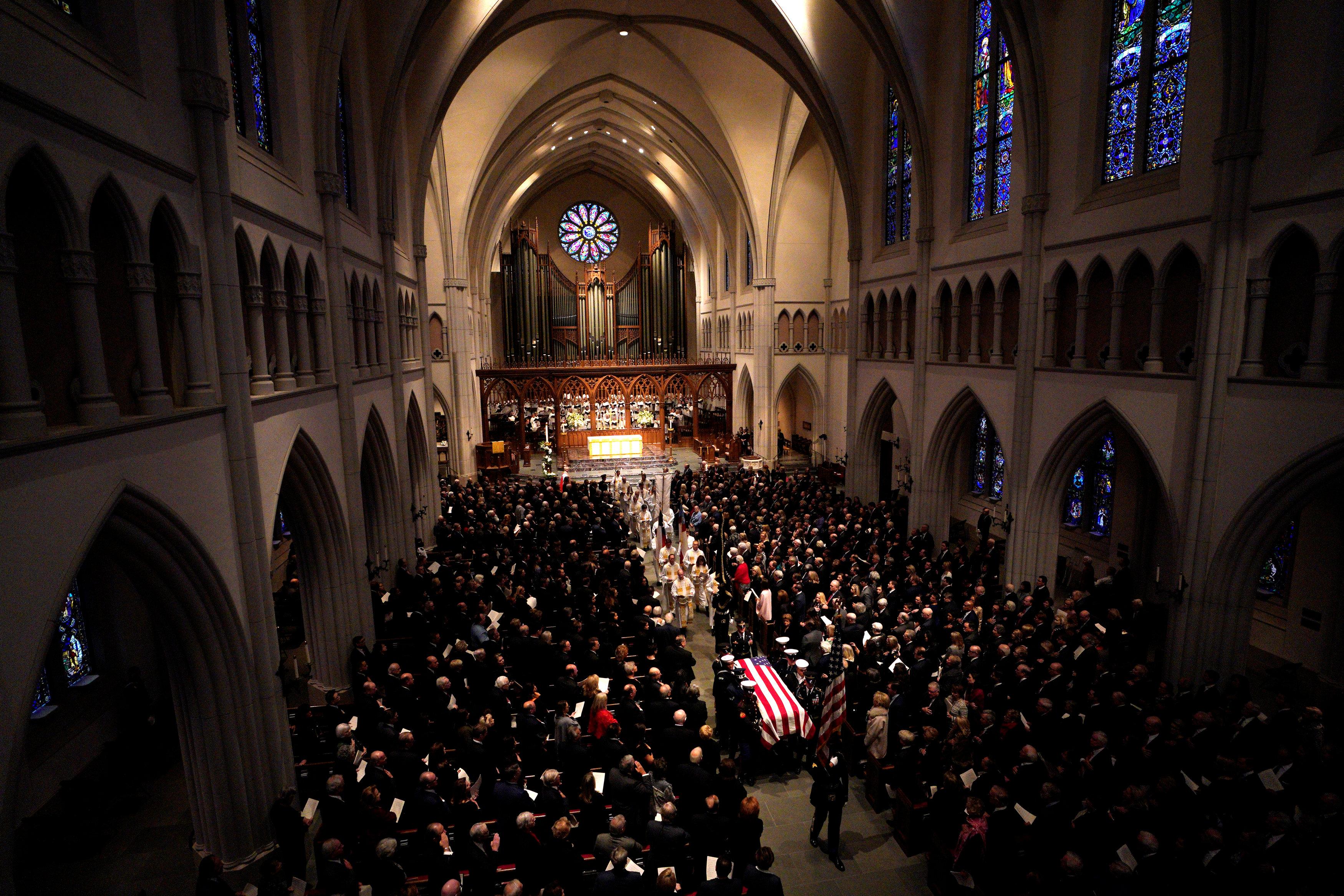 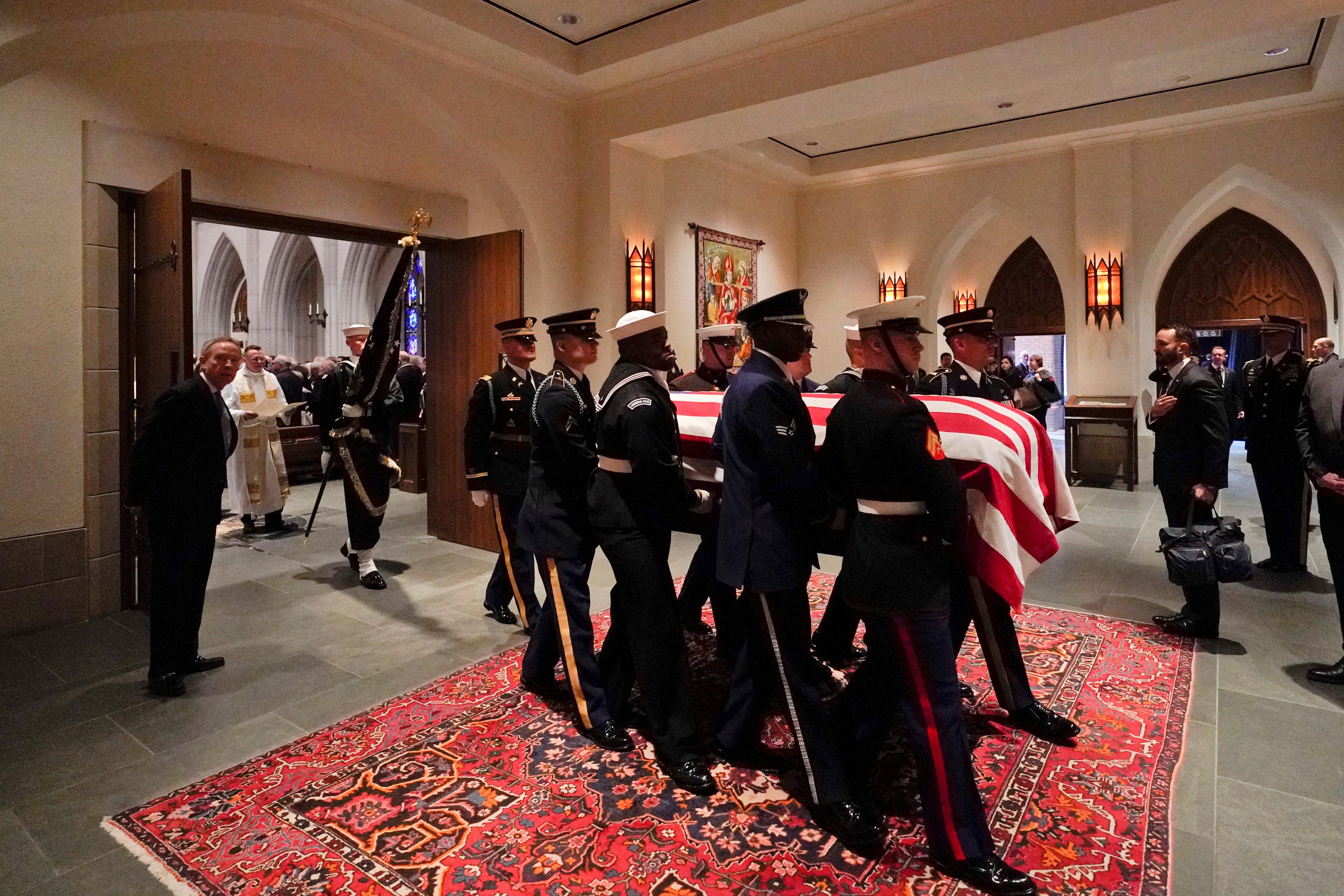 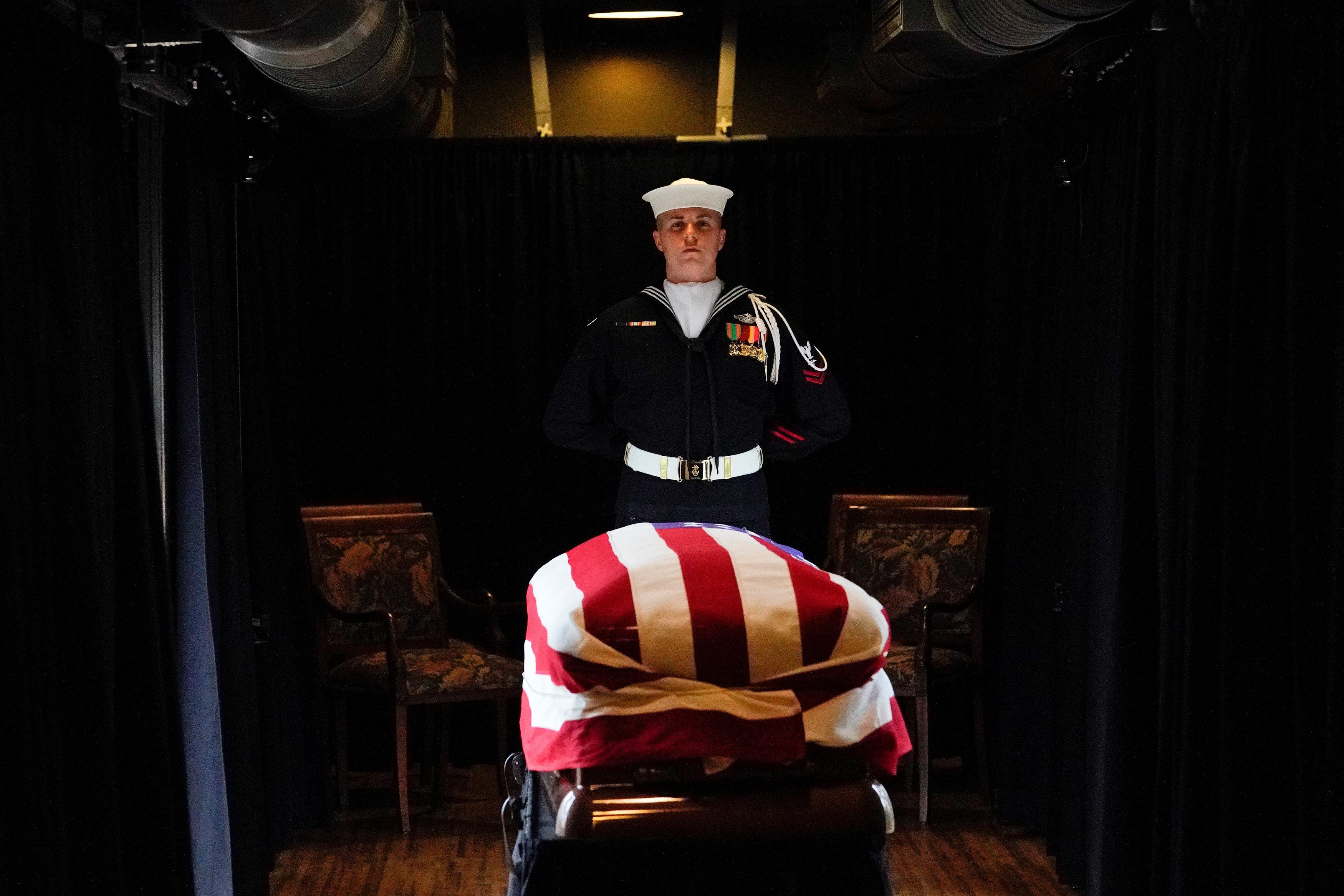 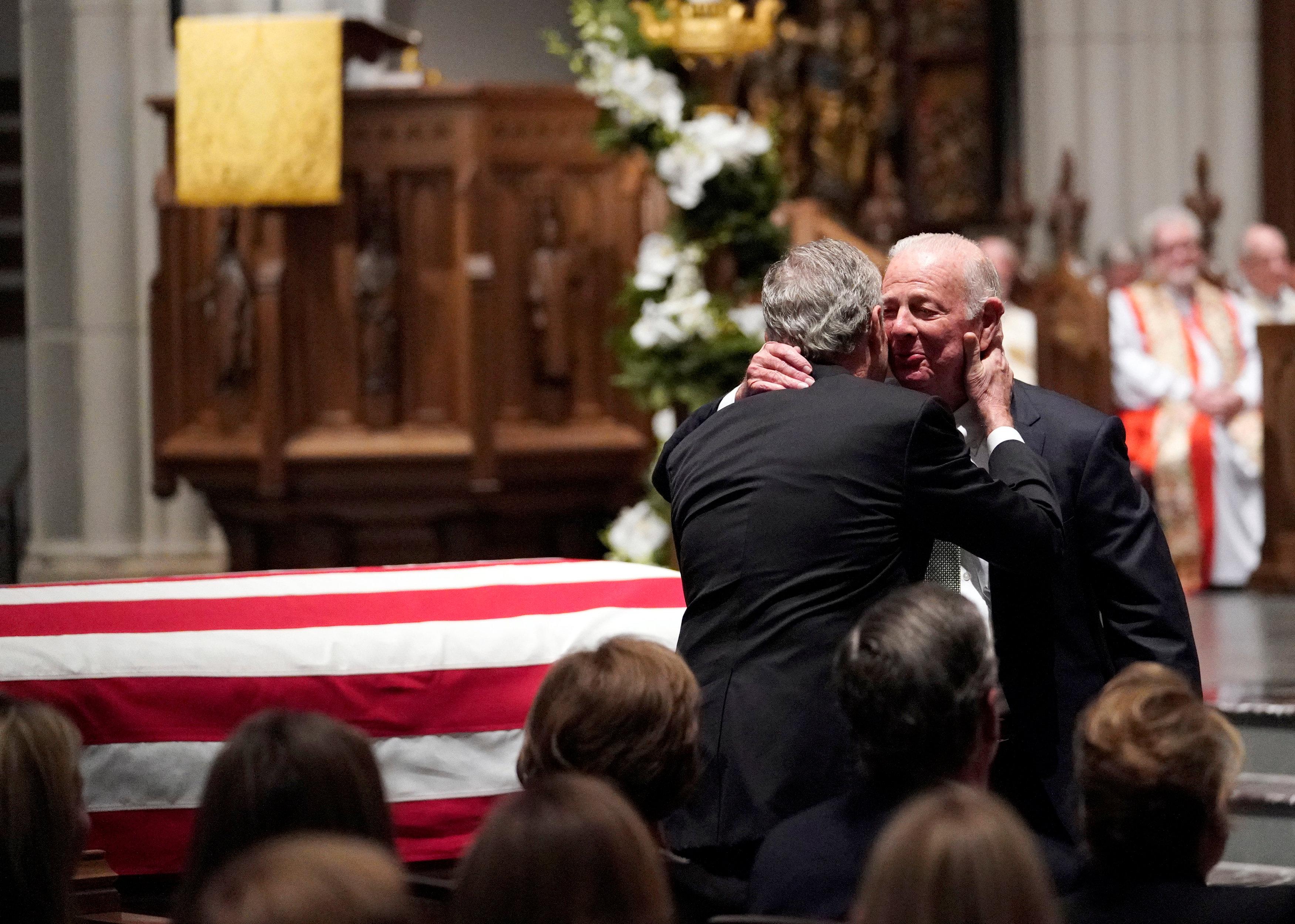 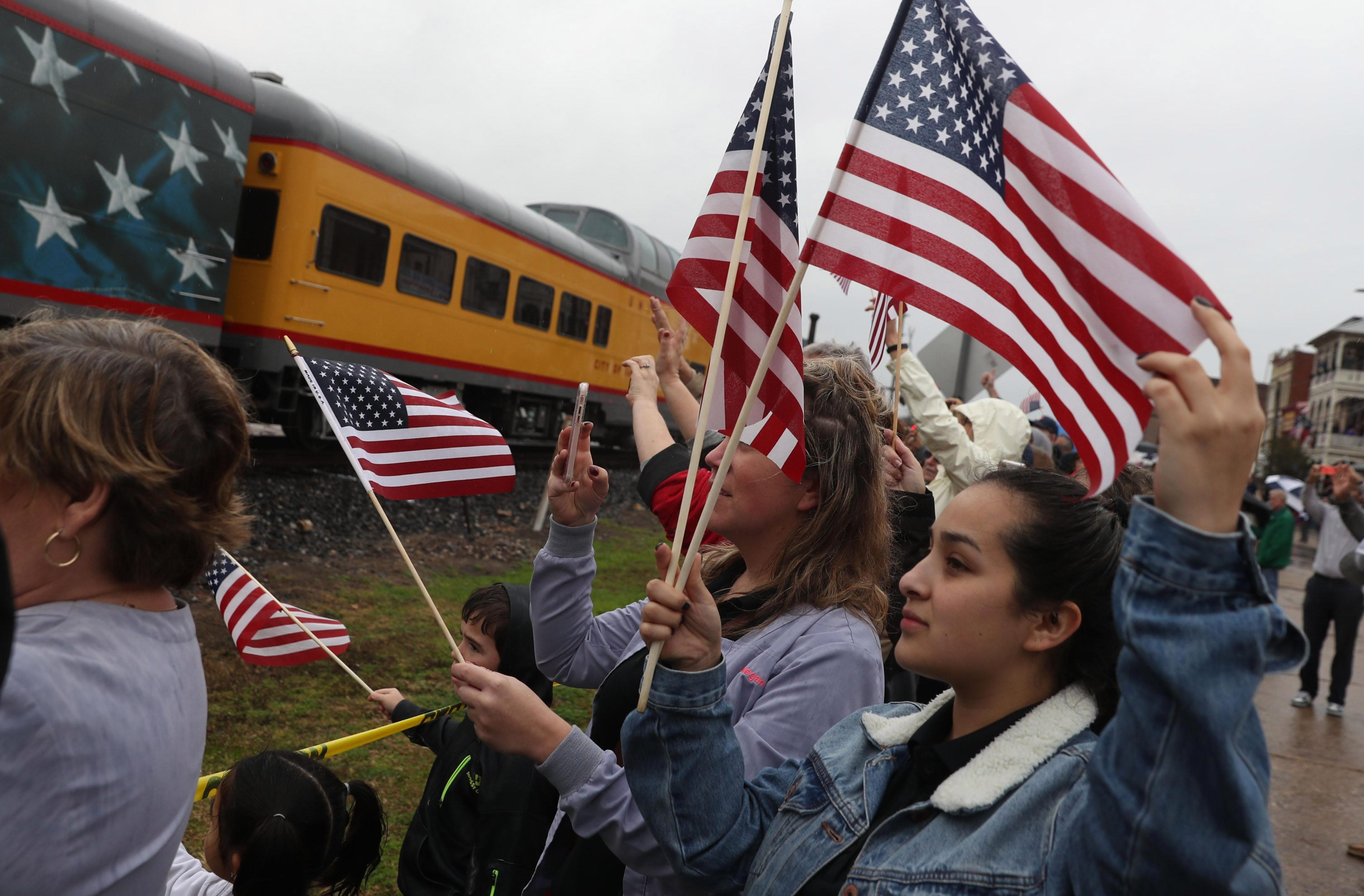 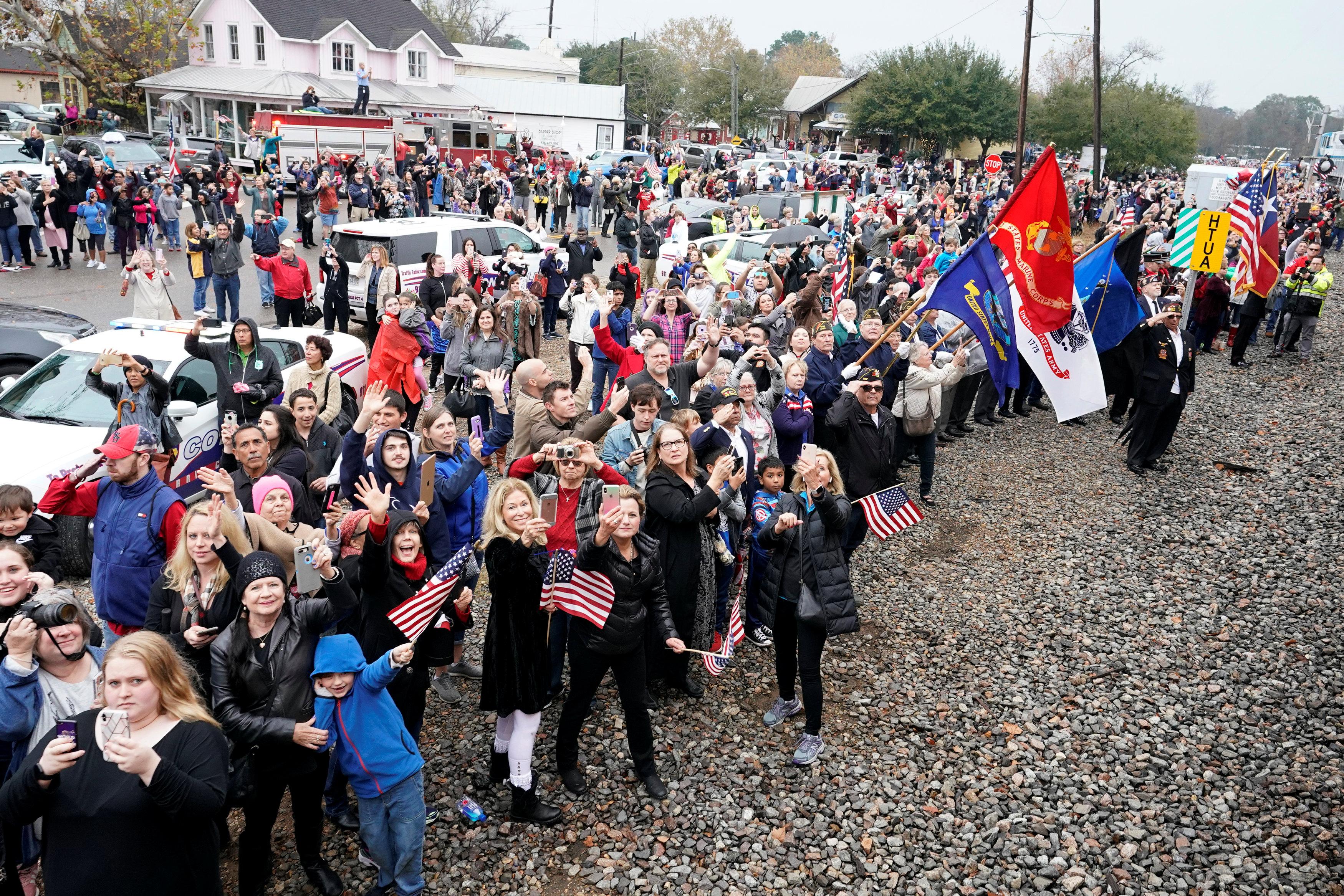 Schwarzenegger played a key role in Bush's reelection campaign – a job that earned him the nickname "Conan the Republican".

Bush would lose that election to Bill Clinton, with Schwarzenegger then going on to become Chairman of the Governor's Council on Physical Fitness and Sports.

A few years later, the Twins star would be governor of the state. 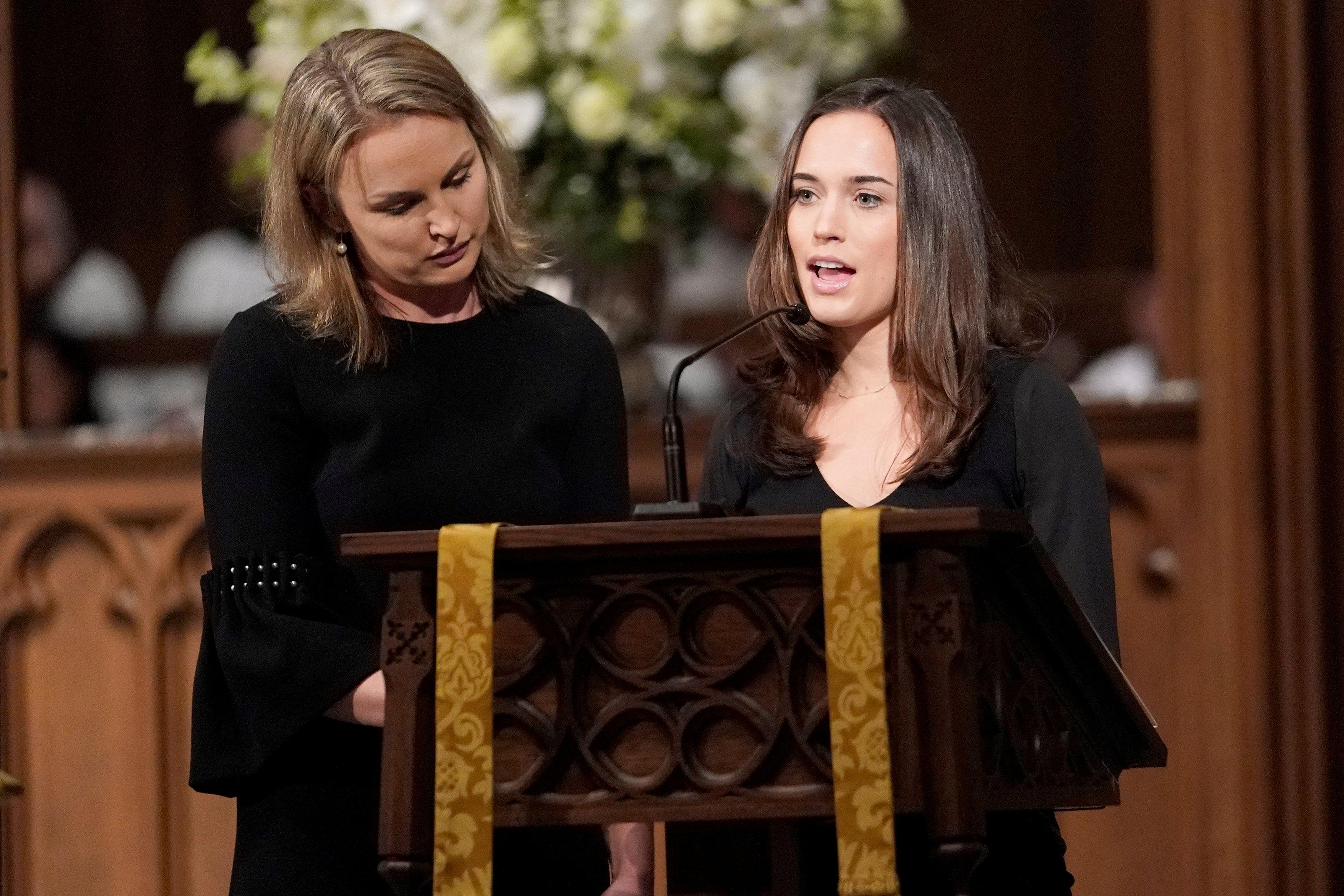 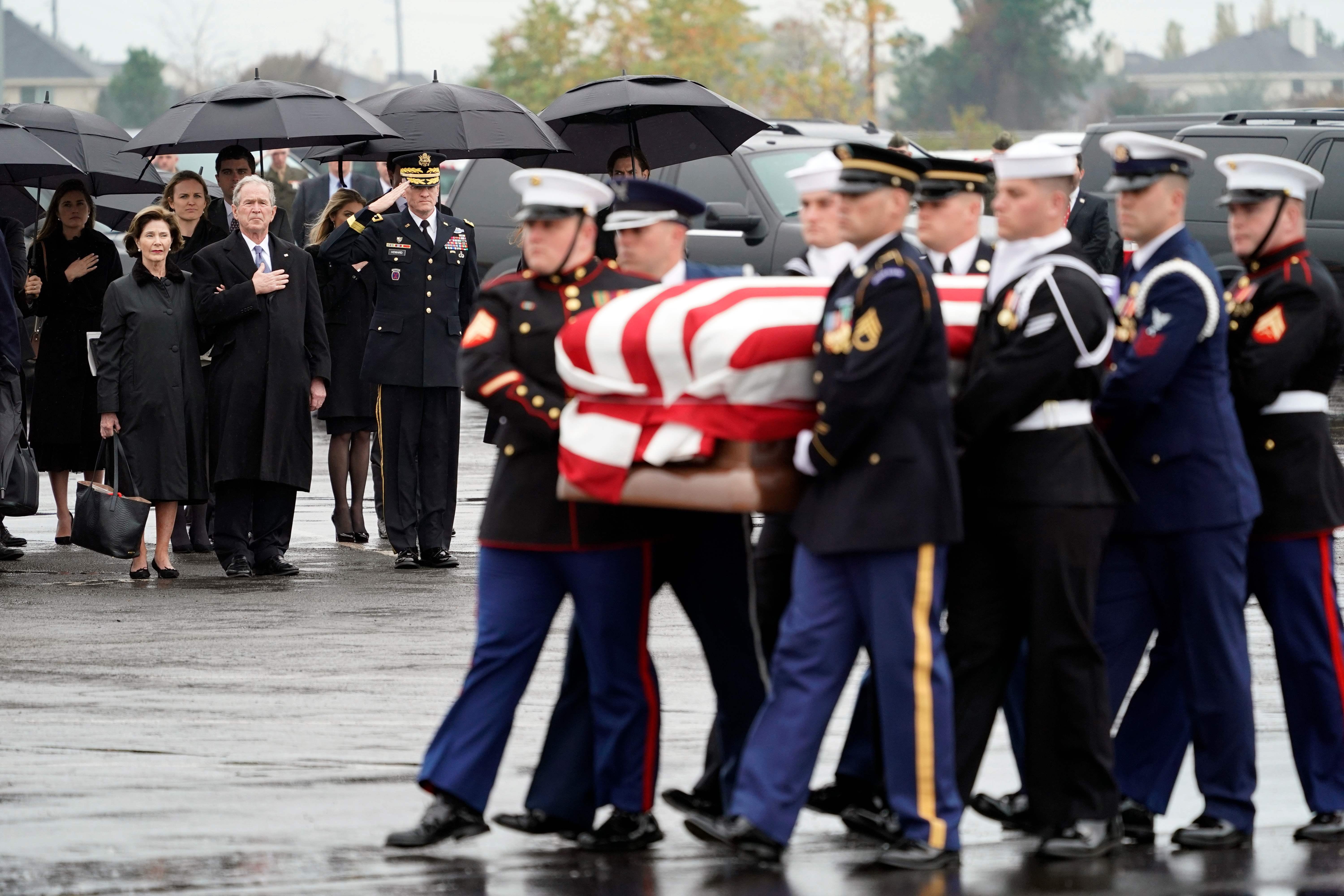 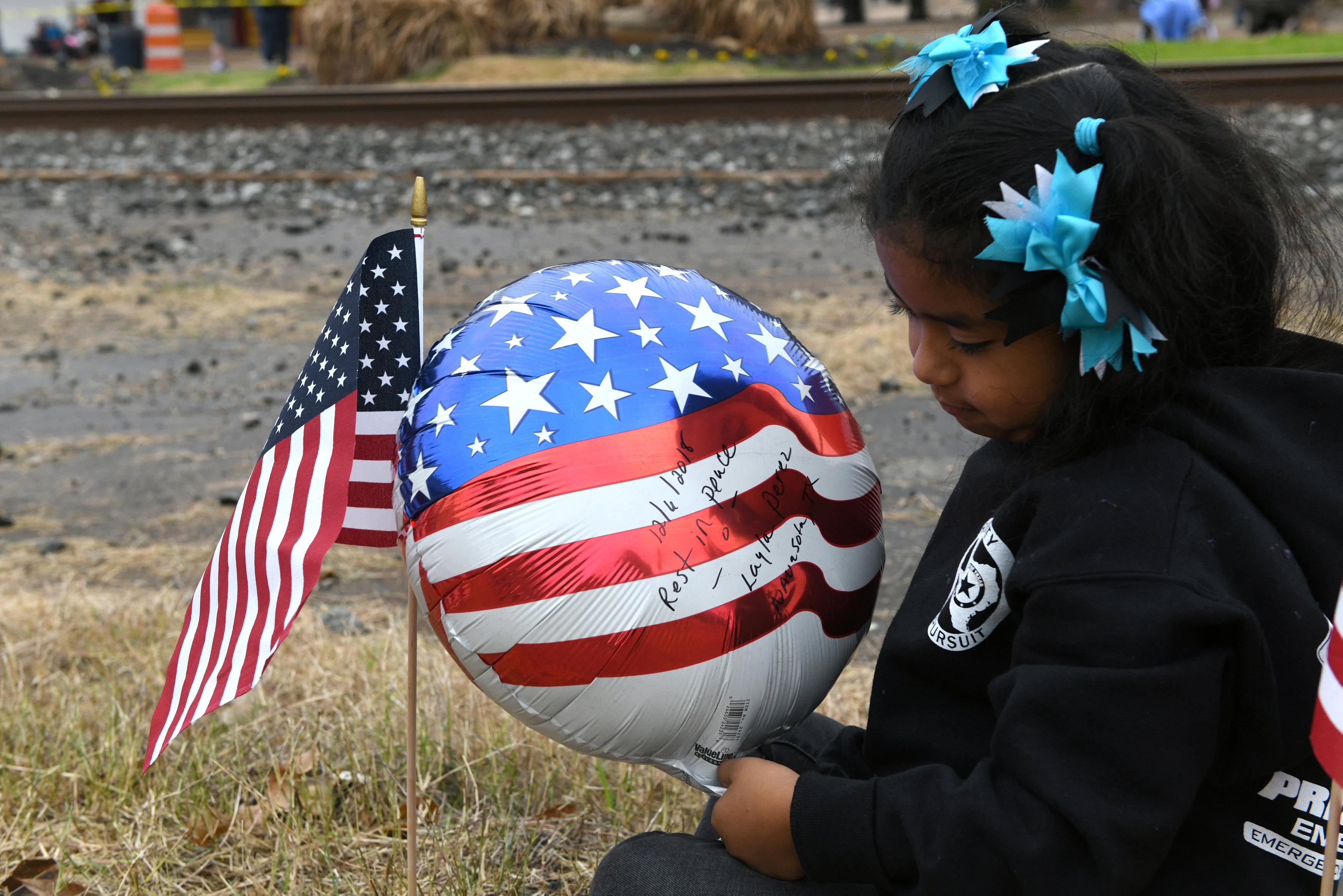 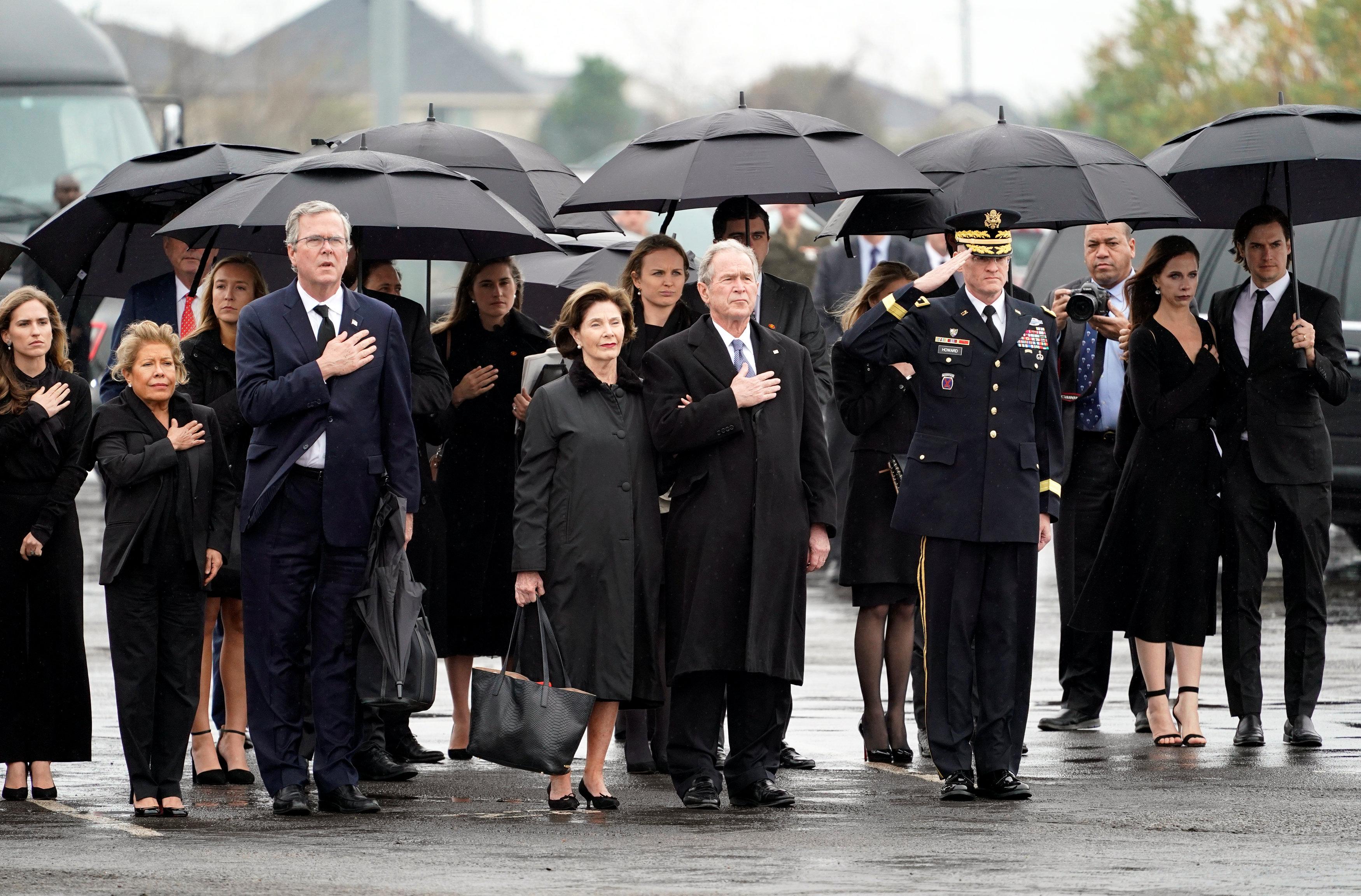 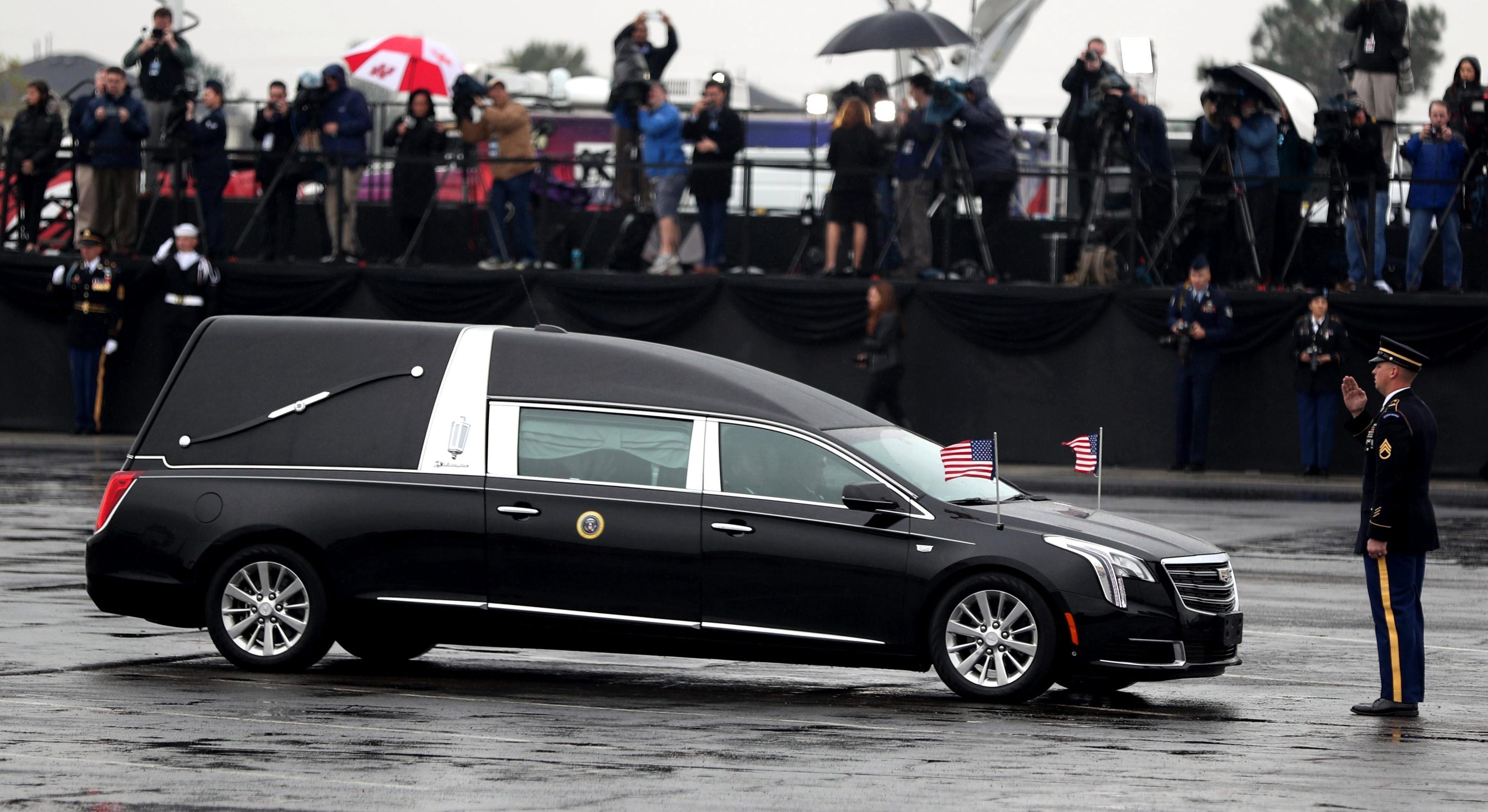 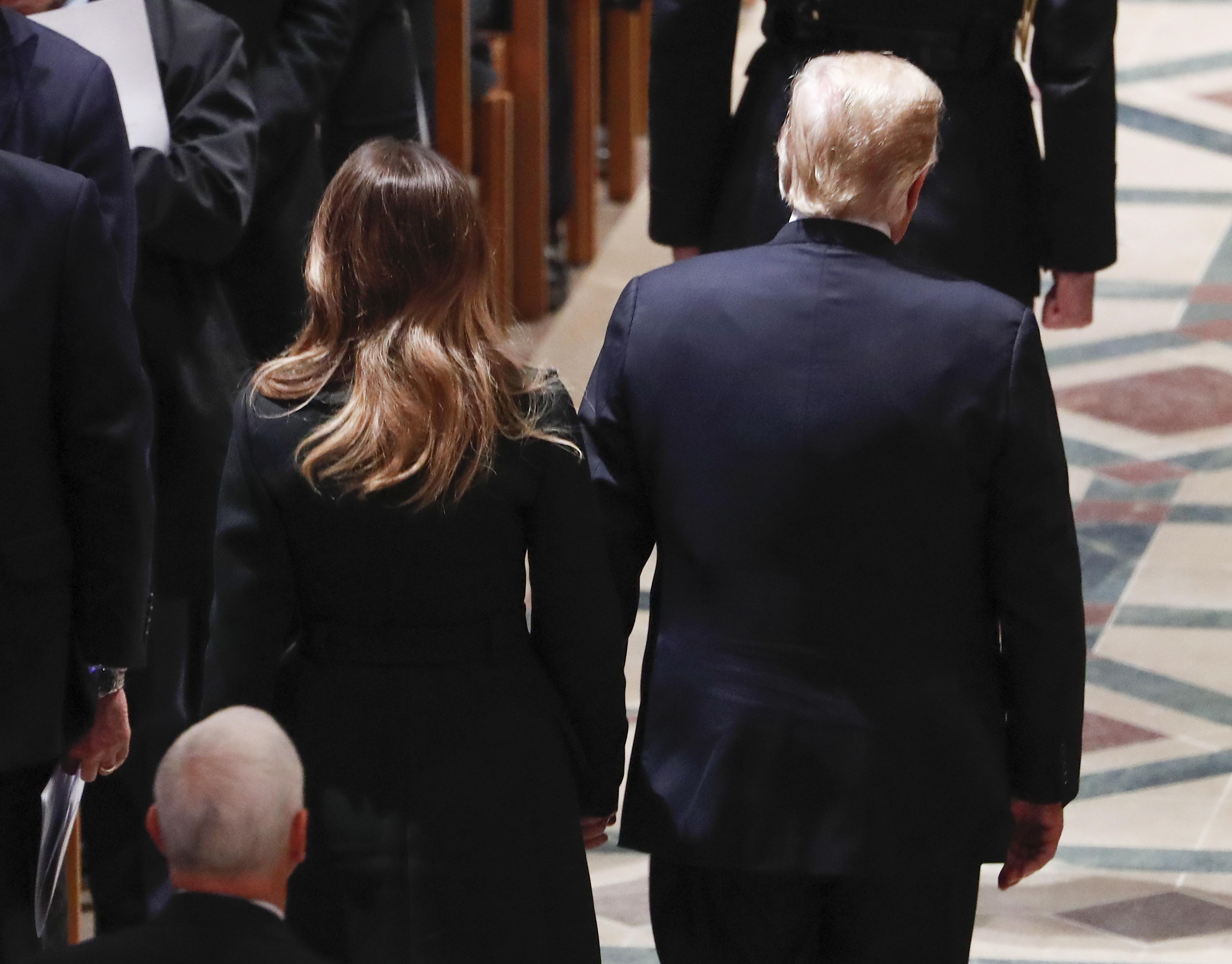 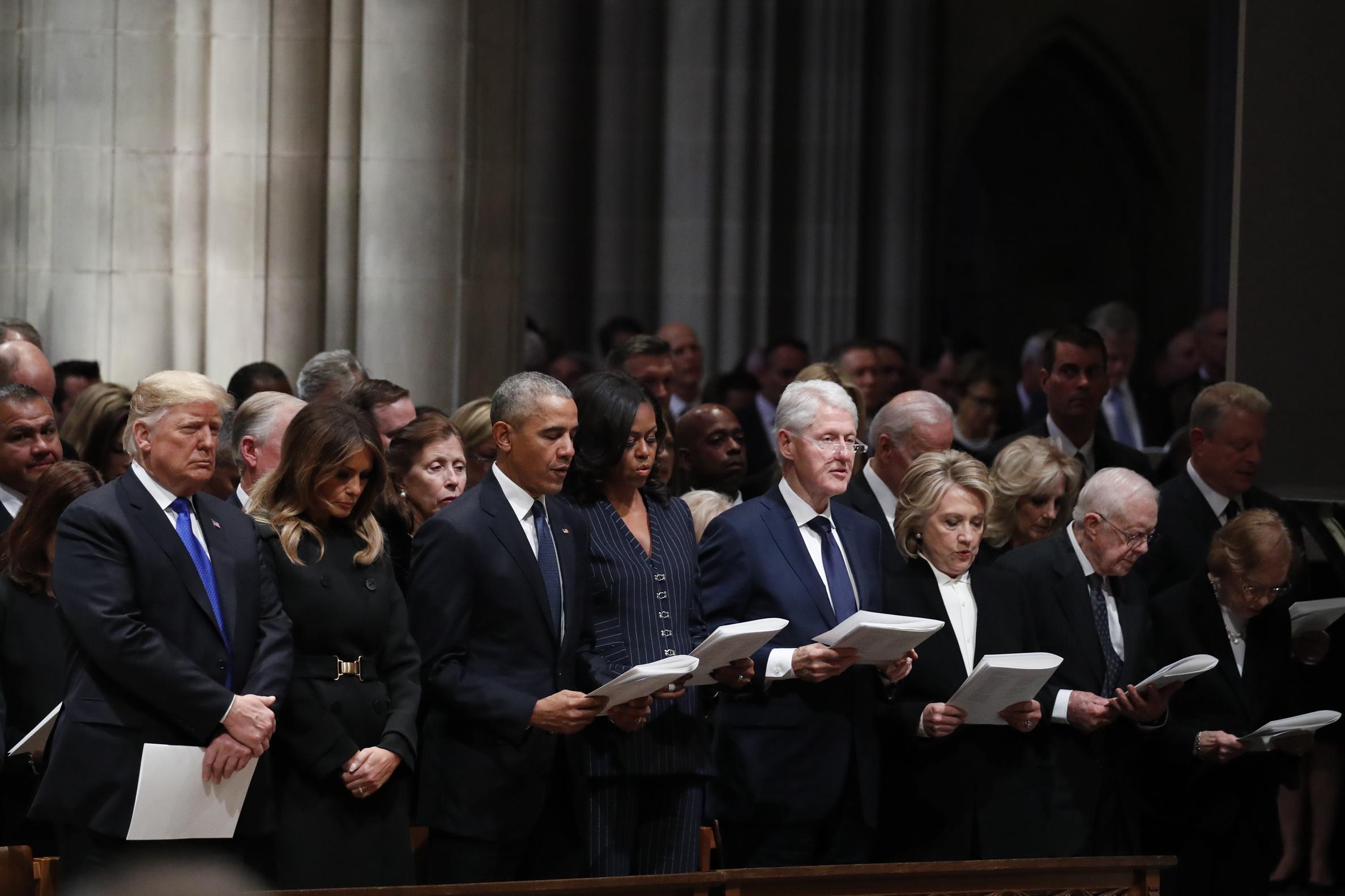 Around 1,200 mourners were at St. Martin's Episcopal Church for the service.

Bush Snr's casket arrived at the Houston church last night in a flag-draped coffin arrived as a military band played.

His body was flown by Air Force One to Houston state funeral service at the Washington National Cathedral in Washington, DC.

His son, George W Bush, his wife Laura and other family members watched as the casket was transferred to the hearse.

It was then driven 45 minutes to the church where Bush worshipped for more than 50 years. Today, 1,200 mourners said their final goodbyes.

Yesterday, George Jnr wept as he laid a hand on his father's coffin in front of Donald Trump, Barack Obama, and Bill Clinton. 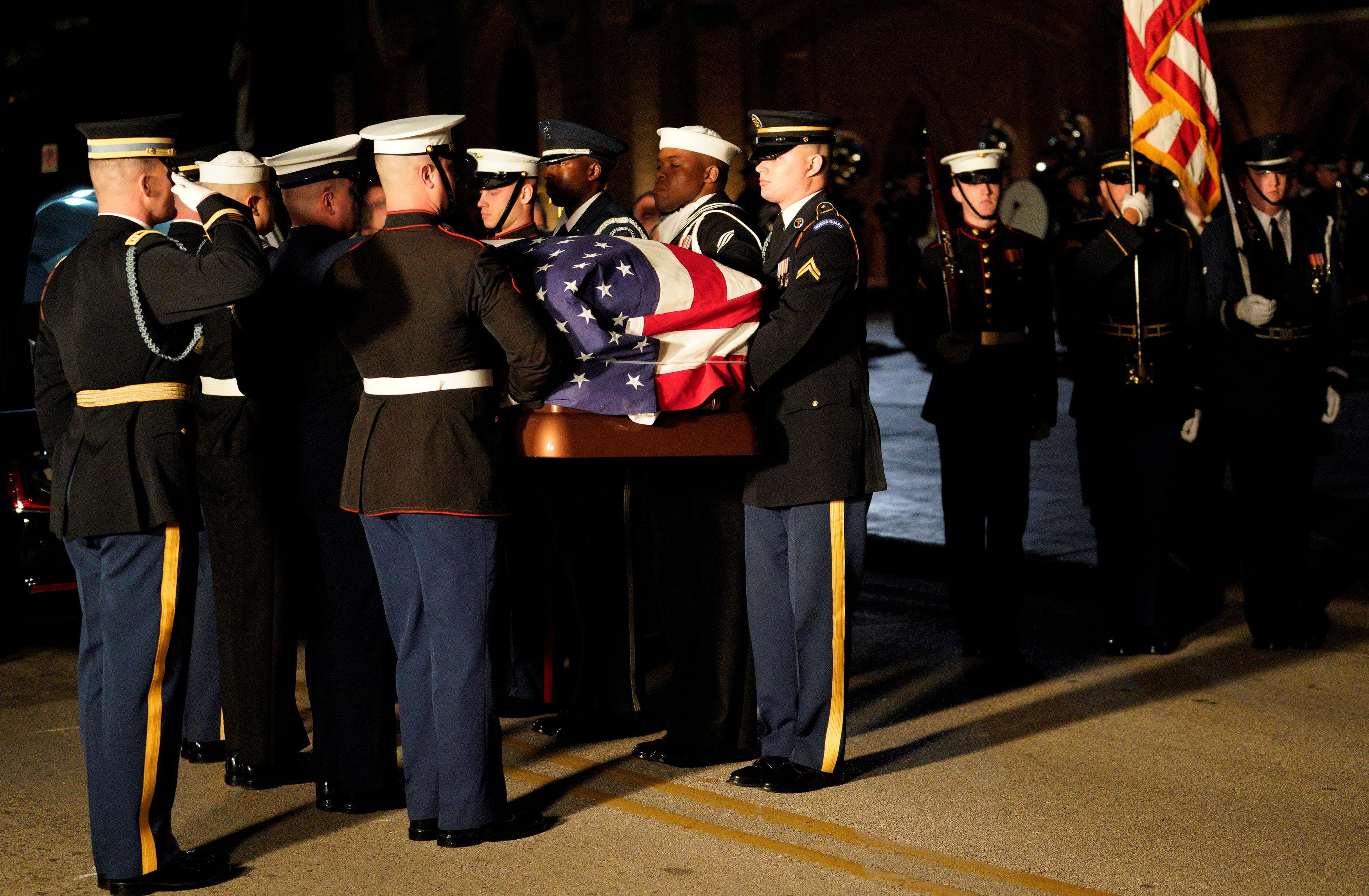 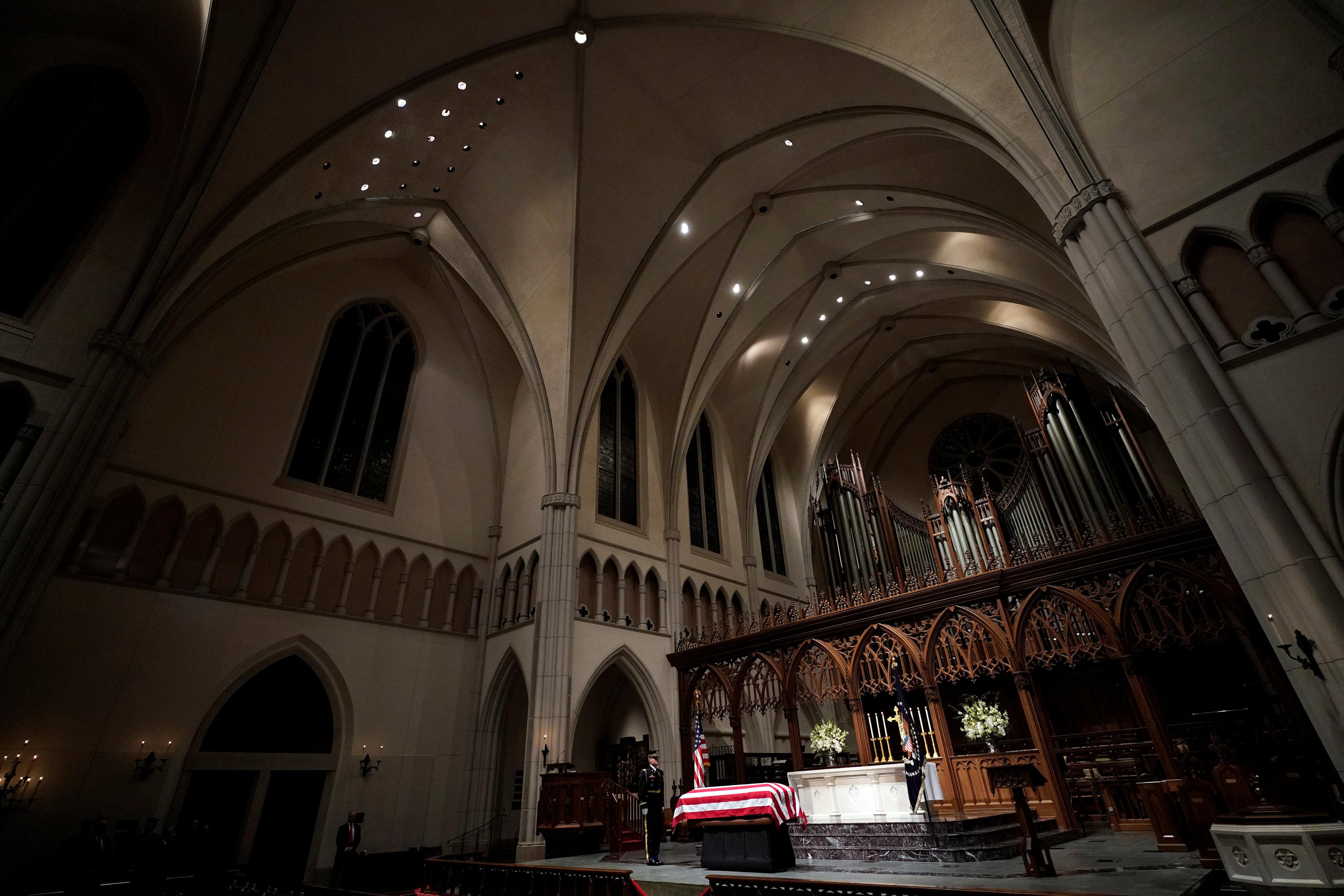 The former presidents sat in the front row as world leaders and American political elite packed the Washington National Cathedral for the state funeral of – the 41st president of the Unites States.

In a eulogy for his father he said: "To us, his was the brightest of a thousand points of light. He knew that failure is part of living a full life – but he taught us to not be defined by failure". 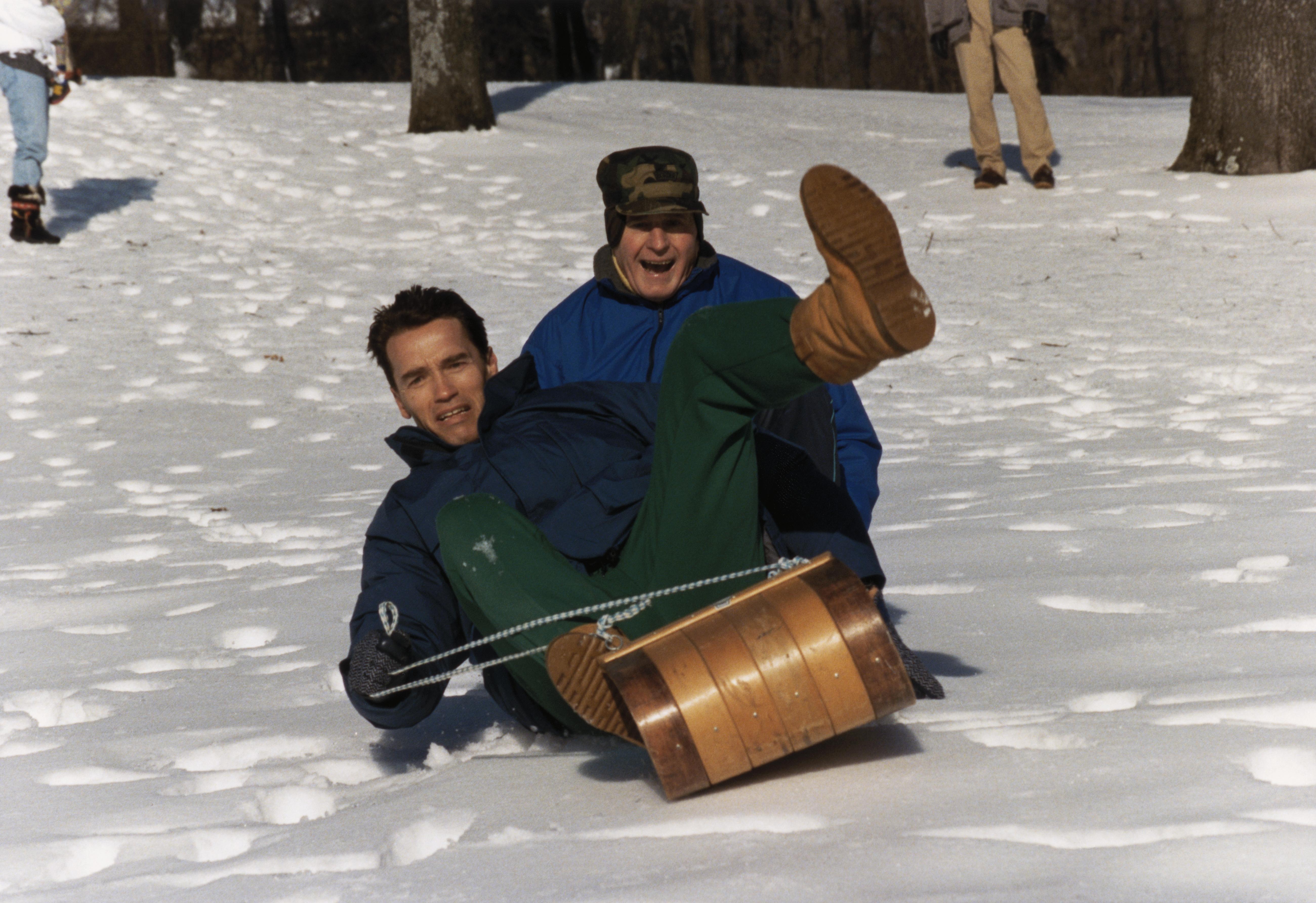 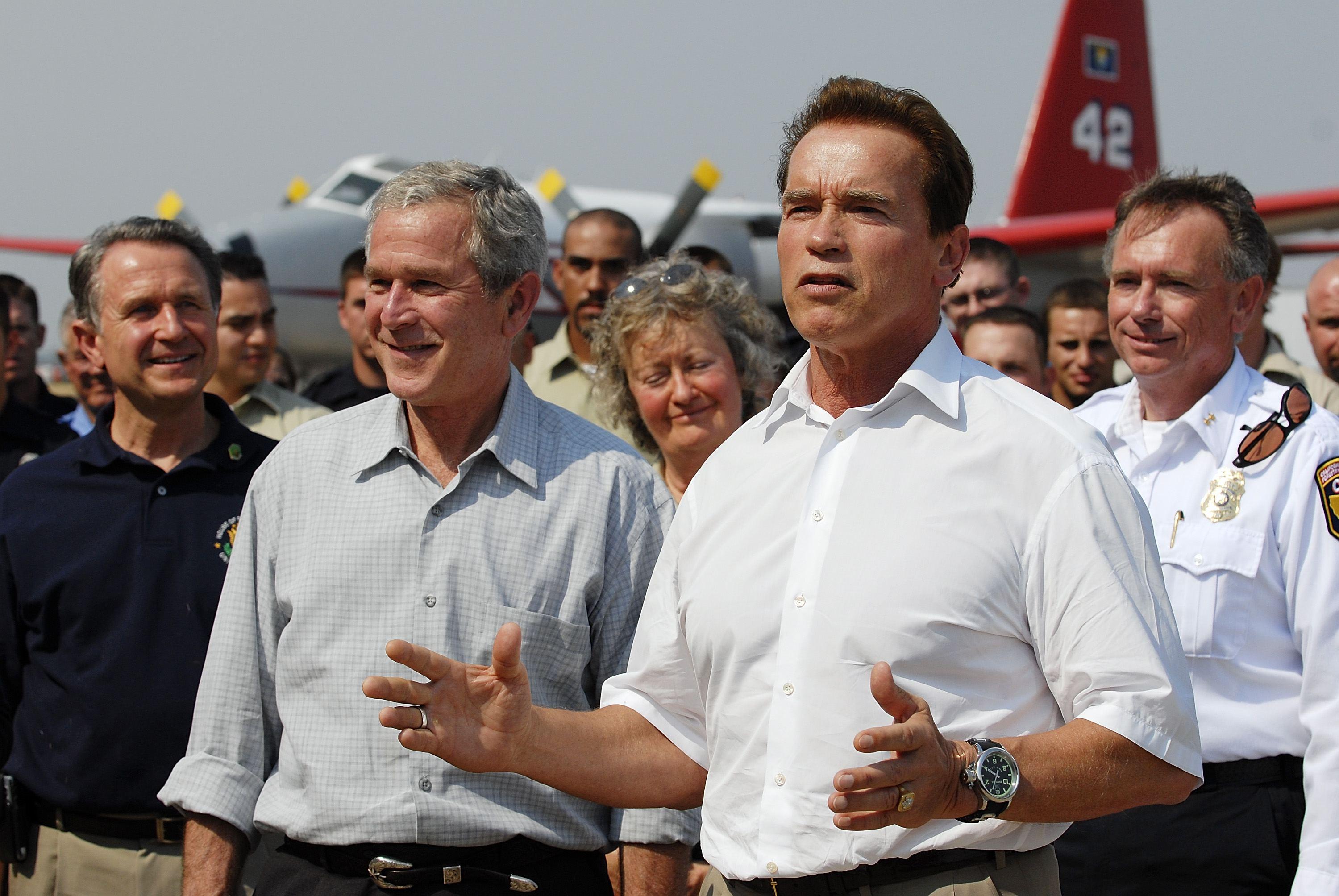 The former president also told how he had sneaked vodka into his father's hospital room.

Trump, who did not speak at the service, ordered the federal government closed on Wednesday for a national day of mourning.

George HW Bush died at the age of 94 just after 10pm on Friday 30 November at his home in Houston, Texas.

He died around eight months after his wife, Barbara passed away.

The funeral followed three days of events in Washington honouring the 41st president.

After the Houston funeral, a special train painted to resemble Air Force One was due to carry Bush’s casket, family and close friends about 70 miles to College Station, where he will be buried in a private service alongside his late wife and their daughter Robin, who died of leukaemia in 1953 aged three.