London: One of the world’s leading LGBTQ campaigners, Australian-born Peter Tatchell, has slammed the UK’s Foreign Secretary James Cleverly for saying that gay people attending the FIFA World Cup should “compromise” and be “respectful” of Qatari laws.

Cleverly said he would like to attend the international football tournament because it was “real work” amid calls for public figures to boycott the championship over the Gulf state’s human rights abuses. 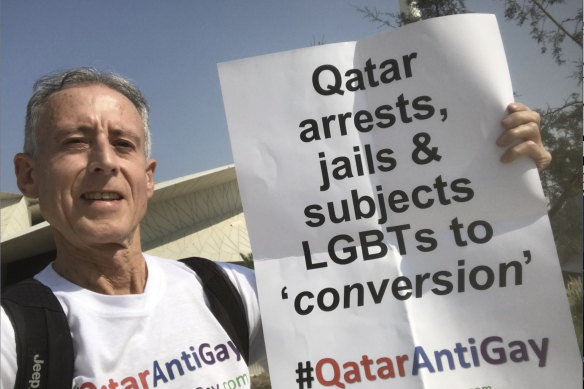 Australian-born gay rights campaigner Peter Tatchell holds up a sign protesting against Qatar’s discrimination against the LGBT community in Qatar.Credit:Twitter/@PeterTatchell

Homosexuality is outlawed in Qatar and punishable with a prison sentence of up to three years, fines and even the death penalty, although there are no recorded cases of this.

Further, it is illegal to campaign for equality for the LGBTQ community and heterosexual sex is illegal if it is outside of marriage.

Tatchell, the subject of the Netflix documentary Hating Peter Tatchell, moved to the UK in 1971 to avoid being conscripted into the Australian army.

The activist this week staged a one-man protest in Qatar which is preparing to host the World Cup next month. He said it was the first-ever protest held in Qatar and in any Gulf state.

He says he and a colleague were held by police and state security services for 49 minutes while photos and videos on their phones were deleted. He said they were interrogated and told to board their onward trip to Sydney.

Qatar’s Government communication office said Tatchell was neither arrested nor detained and was simply told “cordially and professionally” to move on.

“Rumours on social media that a representative from the Peter Tatchell Foundation has been arrested in Qatar are completely false and without merit,” it said in a statement. 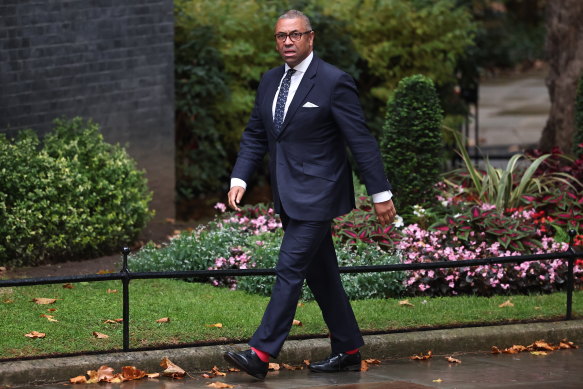 Asked on London radio LBC if he had raised Tatchell’s case with the Qatari government, Cleverly said he had not and that it would not deter him from attending the tournament.

“One of the things I would say to the football fans is: please do be respectful of the host nation,” Cleverly said.

“They are trying to ensure that people can be themselves and enjoy the football and I think with a little bit of flex and compromise at both ends, it can be a safe, secure and exciting World Cup.”

Labour’s Keir Starmer, an avid fan of the beautiful game and Arsenal supporter, is refusing to attend the games on human rights grounds.

Cleverly said he expected to attend as it constituted “real work”.

“As leader of the opposition he’s in a lovely position to send messages, I’ve got real work to do,” he said.

Speaking from Sydney in the early hours of Thursday morning, Tatchell told the Herald and The Age he was appalled by Cleverly’s comments.

“LGBT fans may not be safe,” he said. 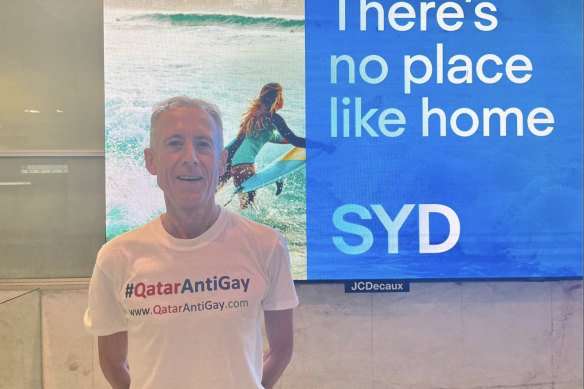 “It is appalling that Mr Cleverly is urging fans to be respectful of the host nation rather than calling them out over their repression.

“Any fans or public figures who go to the World Cup will be colluding with a homophobic, sexist and racist regime and Mr Cleverly should know better,” he said.

The UK’s culture spokeswoman Lucy Powell said sport should be open to all.

“Many fans will feel they can’t attend this tournament to cheer on their team because of Qatar’s record on human, workers, and LGBT+ rights,” she said.

“The government should be challenging FIFA on how they’ve put fans in this position, and ensuring the full safety of all fans attending, not defending discriminatory values.”