54 hours in peril at sea after help sails by

Two sailors were rescued yesterday after clinging for 54 hours to the upturned hull of a Victorian trimaran that capsized off Tasmania’s south-west coast at the weekend. 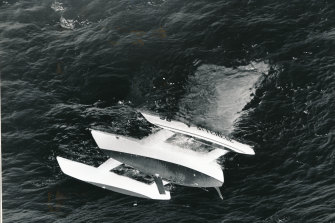 The St Terese drifts out of control in the swell off the south-west coast of Tasmania.Credit:The Age Archives

The skipper of the Around Australia Race vessel St Terese, Mr John Cadwallader, and his New Zealand crewman, Mr Julian Boyd, later told how they signalled in vain to a passing ship soon after their yacht capsized.

Mr Cadwallader said the ship, the identity of which is not known, failed to respond to four flares and emergency calls on VHF frequencies.

“It was the middle of the night in lousy conditions and you don’t get many vessels down there,” he said. “I don’t place a lot of blame on the ship.”

But Mr Cadwallader said the rescue operation could have been started a day earlier, and would have been quicker if the competitors had been allowed to fit satellite-linked emergency beacons.

The pair survived by crawling through an emergency hatch in the hull into a tiny dry compartment, where their food was Mr Boyd’s birthday fruitcake.

Running last in the race, and only three days after leaving Portland, Victoria, where it stopped for repairs, the 10.9-metre multi-hull flipped over at 1 am on Sunday, Mr Boyd’s birthday.

“I was on the helm at the time,” Mr Cadwallader said. “There was about 10 knots of wind and 10-metre waves. The boat broached on a larger-than-normal wave and I think it tripped over the centreboard.”

Mr Cadwallader, 41, a professional diver from Chelsea, said he did not think conditions were extreme at the time, and the vessel was not trailing warps (stabilising ropes) in the water.

He clung to the wheel as the vessel turned, then after freeing himself of deck gear swam out aft and climbed on to the hull. His knock on the hull was returned by the off-watch Mr Boyd, 32, from Christchurch, who opened the emergency hatch.

“I haven’t seen a face like that in a long time,” Mr Boyd recalled. “When he came in he looked pretty worried.”

Mr Cadwallader said: “I was very thankful to get in there, I can tell you.”

The two kept watch on the first night but said the risk of hypothermia drove them both into the compartment on the next two nights.

They believe that they drifted only about 10 nautical miles off the uninhabited, rocky south-west coast, which they could see in the distance.

It was not until yesterday morning that rescue aircraft homed in on the locally transmitting emergency position-indicating radio beacon they carried, 25 miles off South-West Cape. A plane dropped survival packs and, soon afterwards, they were winched Into a National Safety Council helicopter.

“I consider us lucky to be alive, but I think preparation had a lot to do with that,” Mr Cadwallader said. “Without survival suits we would have been in serious trouble.”