LAST HOURS OF THE CANBERRA

CAPTAIN INCLUDED IN DEATH ROLL OF 84

Graphic stories of the last hours of H.M.A.S. Canberra, which has been lost in action in the Solomon Islands battle, are told by the survivors who have reached and Australian port. Of the complement of 816 the casualties totalled 193. Eighty-four lives were lost. The commanding officer, Captain Frank Edmond Getting, of Sydney, was mortally wounded. 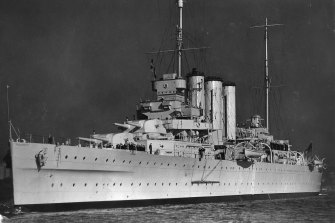 The news of the loss of the Canberra was announced simultaneously yesterday by the Prime Minister (Mr Curtin) and General MacArthur. The communiqué from General MacArthur’s headquarters read:

“With profound regret General MacArthur announces the loss of the Australian cruiser Canberra, which was sunk in battle off the coast of the Solomon Islands while temporarily serving in the forces commanded by Vice-Admiral Ghormley. The greater part of the officers and crew were rescued. Its heroic captain was mortally wounded and died. The families of those who were lost have been notified. The traditions of Australia know no great glory than this dead ship.” 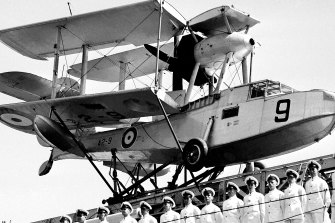 A naval aircraft on the HMAS Canberra in 1938.Credit:SMH Archives

A graphic story of the brief encounter and the last hours of the Canberra was given by Able Seaman P. D. Mackintosh, of Brisbane. He was working in an aircraft defence post, when about 1.50 a.m. he gave one of the first reports that the ship was being attacked. He saw gunfire and a starshell on the starboard quarter, then a few seconds later he reported two torpedoes running down the port side. They missed the ship.

Mackintosh said: “After seeing the torpedoes running down the port side a shell hit us just under the bridge, killing a gunnery officer and wounding the captain. We heard planes overhead, but could not tell whether they were Japanese or ours. About 4 a.m. a United States destroyer came alongside and commenced to take off the wounded. However, an alarm was sounded while the operation was in progress, and the destroyer just crashed away without untying the ropes.

“About 6.40 another destroyer came and took off the remainder of the injured and the survivors. When we were being taken off I saw two explosions on the horizon. They were two magazines going up, and I believe they signalled the end of an enemy cruiser. Prior to being disabled we had been through everything unscathed. On the morning of August 7 the Canberra and other ships were attacked by 18 Japanese bombers and 17 Zeros. In the afternoon more appeared. Next day 22 torpedo bombers attacked, and we got six of them”

Mackintosh related how Captain Getting, although mortally wounded, refused medical aid, continued to direct operations and protested when he was carried aboard a rescue ship.

Mackintosh has the unique experience of having been associated with two other Australian cruisers which have been sunk. He was attached to the H.M.A.S. Sydney, but left the ship in Sydney owing to ill-health. He tried to rejoin it in Fremantle before it sailed on its ill-fated voyage into the Indian Ocean, but missed out by a few days. Mackintosh returned to Sydney to join the Perth as a steward, but could not find a billet. He was then transferred to the Canberra.

Several of the survivors paid high praise to the manner in which the doctors and sick bay attendants stuck to their job. For more than two days they had very little sleep while tending the wounded. Surgeon-Commander Downward, Lieutenant-Surgeon Warden and Lieutenant-Surgeon Morrison came in for particular commendation.

Many of the men and officers had remarkable escapes from death or serious injury. Typical was Paymaster Lieutenant W. H. Ross, who was below off watch when the alarm sounded. His action station was on the bridge, and he raced on deck. He had just left the 4-inch gun dock when a shell landed and caused many casualties. Another shell burst behind Ross before he reached the bridge, and he was thrown on his face. Had he reached the bridge a few seconds earlier he would have encountered the shell which killed the gunnery officer and wounded the captain and commander.

Lieutenant-Commander Mesley, the navigation officer on the bridge, also had several amazing escapes. He was on the bridge when the gunnery officer was killed, and the captain and commander and other ratings wounded, but he escaped without a scratch. A junior officer who was on the bridge and escaped injury was Sub-Lieutenant W. J. Gregory, of Melbourne.