A certain degree of stress is expected when planning a wedding, but Tennille McNamara and Elliott Richardson have gone through more than their share of ups and downs this year.

At one stage during lockdown, the number permitted to be present at a weddings fell to just five. 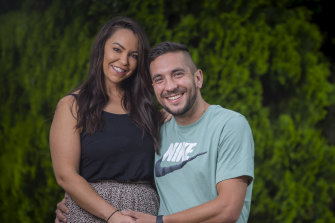 That would have meant the "heartbreaking" exclusion of Ms McNamara’s children Harper, nine, and Jackson, 13, from the ceremony they planned for November 27.

Until Sunday, 10 was the maximum number of guests at weddings, but finally came the happy news from Premier Daniel Andrews that from 11.59pm on Sunday up to 150 people can attend.

It means the Chirnside Park couple can look forward to seeing all 60 guests at their ceremony on Friday at a Yarra Valley winery.

Similar feelings of joy and relief swept Melbourne on Sunday, given that many rituals can resume with some semblance of normality.

"There have been so many ups and downs," Ms McNamara said of organising the wedding. "Just the constant changes and not knowing what’s happening. There have been some emotional days. I feel like it has been a lot more stressful than it normally would be, for sure."

Guests will still have to wear masks – unless they’re socially distanced outside.

"But we’re just excited to be able to go ahead with the wedding at all."

Tamara Reichman, 23, of Prahran, is rapt that the indie rock-pop band she fronts, Tamara & the Dreams, can have a 65-ticket gig at the Leadbeater Hotel in Richmond on December 5. 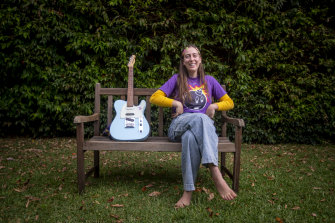 It will be the band’s first live performance in almost nine months. The lockdown limit of 10 people in the pub’s bandroom made gigs financially unviable, but the venue can now hold one person per four square metres. Crowd capacities vary according to venue size and layout.

"I’m really excited," Reichman said. "It’s going to make life go back to normal, to perform to people and feel the energy of actual humans in a room."

Reichman says she has played guitar for an online audience, but nothing beats playing in person.

"When I’m on stage, I feel this magic feeling that I don’t feel anywhere else.

"I make music so that people can hear it, so that I connect with people. It’s not necessarily something I enjoy just keeping to myself. I didn’t really realise that before this year."

Peter Shaw, president and player in the Princes Park touch rugby competition, is keen to get back on the field after a hiatus of eight months.

Games for 24 teams will resume on Wednesday night. Contact or non-contact sports can resume from Monday with a cap of 500 spectators and a density of one person per four square metres.

Mr Shaw, 44, said he had put on five kilograms and found lockdown tough, mentally. "A lot of my life was built around sport."

The park setting and the atmosphere made it "a massive social outlet", he said. Players often stay back, have a drink, start a barbecue and talk to other teams. 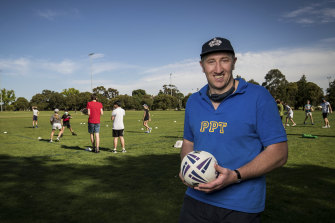 Keen to get back out there: Peter Shaw from Princes Park touch rugby competition.Credit:Darrian Traynor

Restrictions and contact-tracing protocols will change the atmosphere slightly. Team numbers will be kept to a minimum and players cannot stray far from their designated games.

Father Brendan Reed, parish priest of Catholic churches at Deepdene, Balwyn, Camberwell, Surrey Hills and Wattle Park, said he was "pretty excited" that the Premier had announced in increase from 20 worshippers allowed at services to up to 150 people, or one per four square metres.

This means between 65 and 125 worshippers can return to his churches, depending on their size. He said parishioners had been "good, law-abiding citizens" during the pandemic, "but they're looking forward to getting together and supporting one another and expressing our faith". 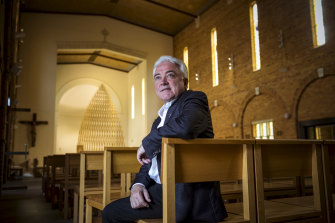 Greater numbers are allowed to attend if services are outdoors, but Father Reed said his parishes' services would probably all be indoors.

"I did try two outdoor [Masses] last week and one got washed away and one got blown away. That’s Melbourne’s unpredictable weather."

He said people could book at Try Booking for Christmas services, but some places would be reserved for those who turn up not realising this rule, and they can sign in using a QR Code. "We don’t want to be in a position of turning people away if we don’t have to," Father Reed said.

He said at Deepdene’s Our Lady of Good Counsel church, 700 people would normally attend the 6pm Christmas Eve service.

With that figure too high under current pandemic restrictions, extra services will be held, increasing from two services per church in his parishes in a normal year on Christmas Eve, for example, to up to six this year.