A new long-term captive breeding program for the spotted tree frog would create an “insurance population” fending off extinction, a scientist involved in the project says.

A chocolate company, governments and philanthropists are all investing heavily in the scheme to give the critically endangered animal a future. 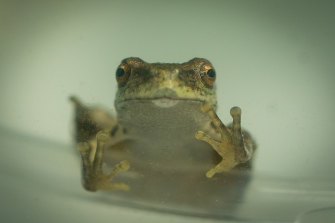 This group of “founder animals” will remain in captivity, to breed each year.

Their surviving offspring, which will be raised from tadpoles into young frogs, will be released into the wild once they are developed enough, possibly not for two or three years. 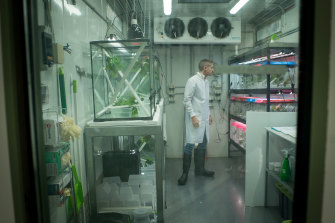 A staff member at the frogs’ quarters at Healesville Sanctuary.Credit:Zoos Victoria

Dr West said the bushfires and the effects of climate change had worsened the frogs’ already precarious state, after previous hits from exotic fish predators and a deadly fungus, and said the decline was predicted to continue “unless we intervene”.

Before the bushfires, there were eight distinct populations of the frogs across north-eastern Victoria and southern NSW, Dr West said.

But after the fires there were seven groups with some of those down to tens of frogs compared with hundreds before the fires.

The project is a collaboration between Zoos Victoria, the Victorian and NSW environment departments and the University of Melbourne.

Funders include the Victorian and Federal governments, donations, and a Cadbury chocolate campaign for endangered frogs, linked to Freddo frogs.

Mr Gilbert believes the spotted tree frog population has more than halved in the past 20 years and is “decreasing pretty consistently year to year”.

The 19 breeding frogs were taken from creek banks and under logs, in different areas in north-eastern Victoria, to ensure genetic diversity.

Researchers caught them by listening for the male frog’s distinctive high-pitched “eek” call and looking for the shine of their eyes in torch light.

The frogs now live safe from predators in individual tanks. They are fed live crickets, and are in brumation (inactive with slowed metabolism) for the winter.

Around October, the temperature will be increased to simulate nature, and the frogs will be put into larger tanks in pairs and groups for breeding.

Mr Gilbert said the program was insurance against a serious threat. “If we had another couple of fires in the next few years, which is possible, we run the risk of losing more animals, before anything’s done about it.”