EXCLUSIVE: Freddie Flintoff is ‘lucky to be alive’: Top Gear presenter’s son says family is ‘shocked’ after star suffered ‘nasty crash’ as he recovers in hospital

Top Gear host Andrew ‘Freddie’ Flintoff’s son said that he is ‘lucky to be alive’ after he was airlifted to hospital following a ‘nasty crash’ during filming.

Corey Flintoff, 16, said that his family have been left ‘shocked’ after the former England cricket ace, 45, was taken to hospital.

He was behind the wheel while shooting an episode for the BBC series at Dunsfold Park Aerodrome in Surrey – when temperatures plunged to 0C at the test track – and reviewing the car when he was involved in the accident.

Corey said that his mother had raced to be beside the former cricket star’s hospital bed.

He told MailOnline: ‘He’s OK. I’m not too sure what happened but he is lucky to be alive.

‘It was a pretty nasty crash. It is shocking. We are all shocked but just hope he’s going to be OK.’ 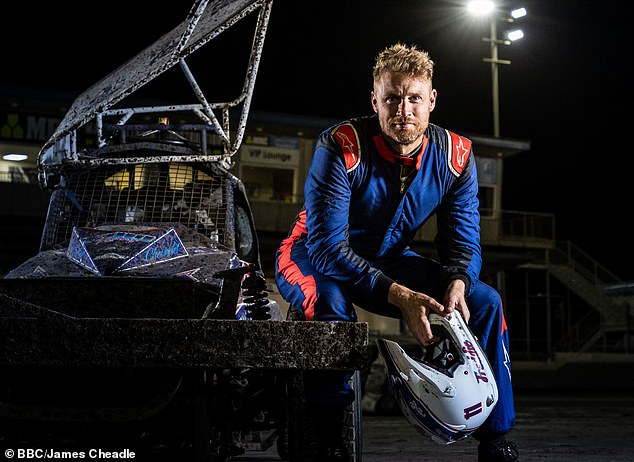 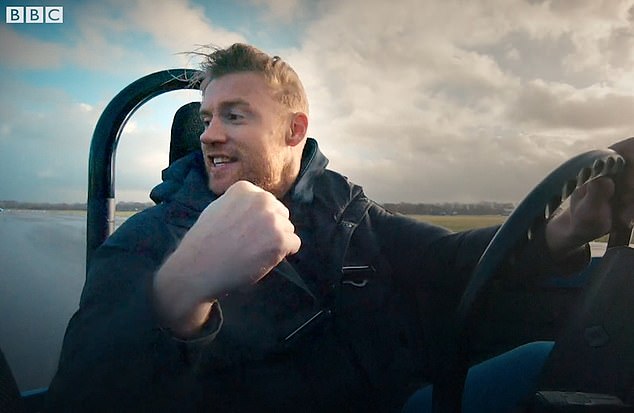 The BBC confirmed that the father-of-four was hurt in the crash and taken to hospital for further treatment. Sources told The Sun that Flintoff’s injuries are ‘not life-threatening’.

A spokesperson for the BBC told MailOnline: ‘Freddie was injured in an accident at the Top Gear test track – with crew medics attending the scene immediately. He has been taken to hospital for further treatment and we will confirm more details in due course.’

Sources told The Sun: ‘All the usual health and safety measures were in place for filming too. Freddie was taken to hospital by air ambulance shortly afterwards.

‘Filming has been postponed for now and all anyone cares about is Freddie recovering.’

Flintoff was behind the wheel filming when the incident occurred, seeing on-site medics at the venue near Cranleigh rush to his aid. His co-star Chris Harris, who presents the show alongside Flintoff and Paddy McGuiness, was also at the Top Gear test track.

In 2019, Flintoff was heard fearfully yelling, ‘I can’t stop,’ as he hurtled head-first down a runway just inches off the ground in a three-wheeled cycle car. He had been racing his co-hosts when he realised he was running out of road and about to overshoot the finish line – seeing him spin off in a cloud of dust.

Flintoff walked away from the ‘near-death’ crash unscathed, insisting he was ‘absolutely fine.’

He said at the time: ‘I go to great lengths to make sure I do well in Top Gear drag races but, on this occasion, I went a few lengths too far. It will look more ridiculous than dangerous when you see it on TV.’ 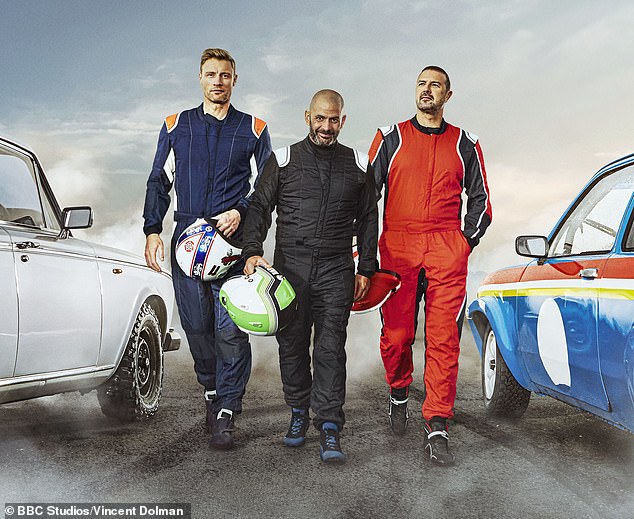 Flintoff was behind the wheel filming when the incident occurred, seeing on-site medics at the venue near Cranleigh rush to his aid. His co-star Chris Harris, who presents the show alongside Flintoff and Paddy McGuiness, was also at the Top Gear test track 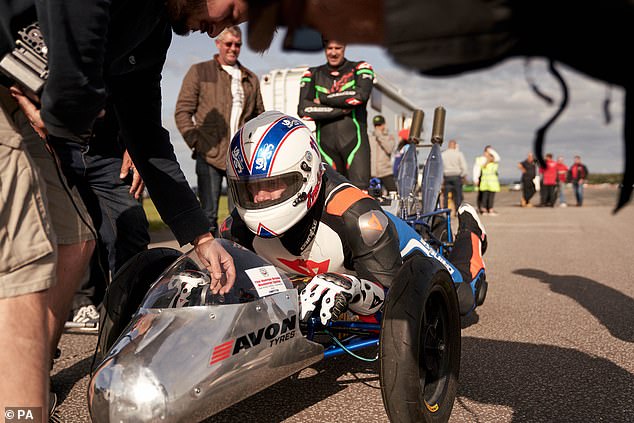 In 2019, Flintoff was heard fearfully yelling, ‘I can’t stop,’ as he hurtled head-first down a runway just inches off the ground in a three-wheeled cycle car 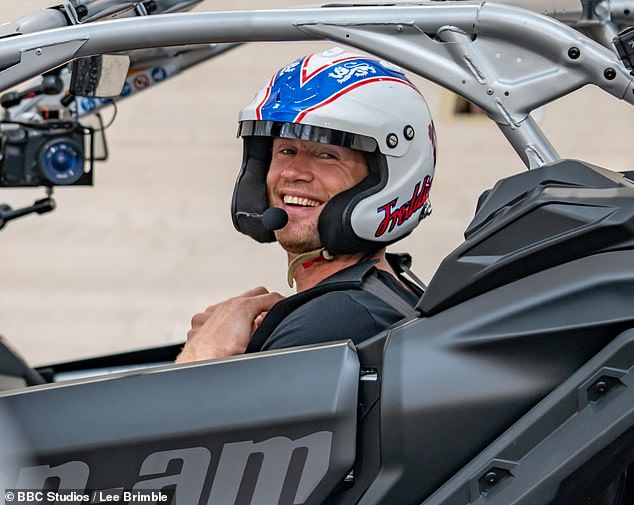 Flintoff, who was appointed England cricket captain twice, first in 2006 and 2007, retired from the international stage in 2010, briefly returning to play for Lancashire four years later.

Following his successful sporting career he became a familiar face on television, joining various reality and panel shows and appearing as the face of supermarket brand Morrisons.

In 2010 he became a team captain on Sky’s A League Of Their Own, hosted by James Corden before being crowned king of the jungle in the first series of the Australian version of I’m A Celebrity…Get Me Out Of Here! in 2015.

After appearing in the BBC drama Love, Lies and Records in 2017, he went on to make his musical theatre debut in Kay Mellor’s Fat Friends The Musical and hosted All Star Musicals for ITV in December the same year.

He was announced in October 2018, ahead of the show’s 27th series, as a new host of Top Gear alongside Paddy McGuinness and Chris Harris.

McGuinness also cheated death after losing control of a red Lamborghini in the Yorkshire Dales in 2020.

It comes after Richard Hammond was left in a coma after a serious crash during filming in September 2006.

The ex-Top Gear presenter crashed a jet-powered Vampire dragster vehicle while travelling at 288mph, and spent five weeks in hospital recovering from his injuries.

Top Gear crashes through the years

Richard was left fighting for his life after crashing the jet-powered car while going at 288 mph as he tested the vehicle at the former RAF Elvington airbase near York. Hammond was completing a seventh and final run in the car when the front-right tyre blew-out and the dragster veered off the runway, rolled over, and Hammond was left with a traumatic head injury and was in a coma for two weeks. In the year following the crash the TV presenter returned to the show and spoke about the crash on the Jonathan Ross Show, but couldn’t remember any of it because of his injuries. 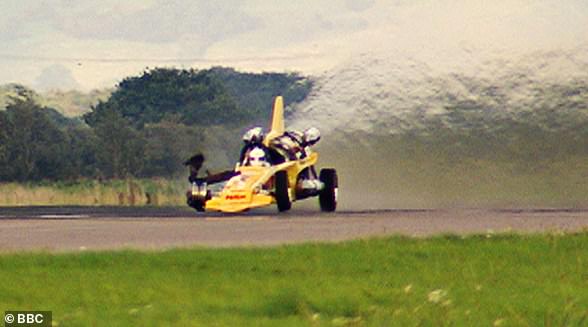 Shocking: Richard was left fighting for his life after crashing the Vampire Dragster while going at 288 mph as he tested the vehicle at the former RAF Elvington airbase

In September, Freddie revealed he suffered a nasty escape after a high speed crash in a jet trike during filming. The cricket star, 41, insisted he was ‘absolutely fine’ after his jet trike careered off the road during a race at the Elvington Airfield near York. Freddie reportedly careered his high speed trike off the road as he filmed the high-speed race. Crew members rushed to Freddie – who was wearing a full motorcycling suit and helmet for the scenes – but he emerged with barely a scratch. 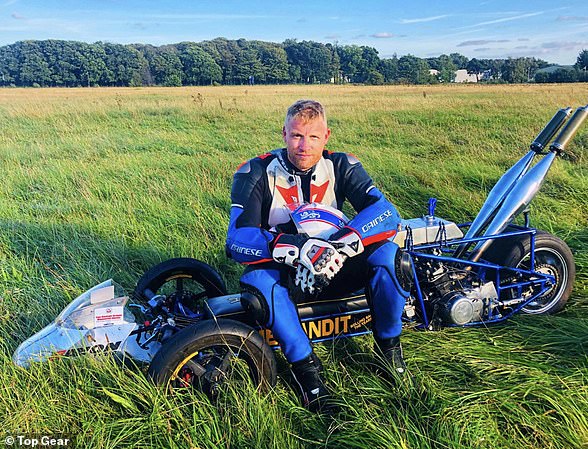 Close call: In September last year, Freddie revealed he suffered a nasty escape after a high speed crash in a jet trike during filming

Paddy McGuinness’ back axel comes off his Pontiac Firebird – 2020

In the latest series of Top Gear, Paddy embarked on the ‘original’ American Road Trip with Freddie and Chris Harris. He arrived in their start point of Peru with a Pontiac Firebird which didn’t have a roof amongst several other problems. When the trio decided to test out their cars on a straight 1/4 mile stretch of road Paddy’s car only got a few yards before the back end of the axel came apart entirely and he was forced to abandon the car. 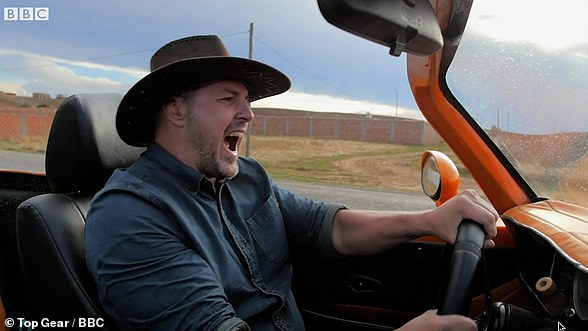 In the latest series of Top Gear, Paddy was forced to abandon his Pontiac Firebird after the back end of the axel came apart entirely (pictured)

In a now famous segment from Top Gear, former presenter Jeremy flipped over a Reliant Robin multiple times. The motorcar journalist was flipping it over to prove that the three-wheeled car could easily tip over. In his Sunday Times driving column Jeremy revealed that he had actually asked crew to tinker with the car ‘so that the poor little thing rolled over every time I turned the steering wheel’. 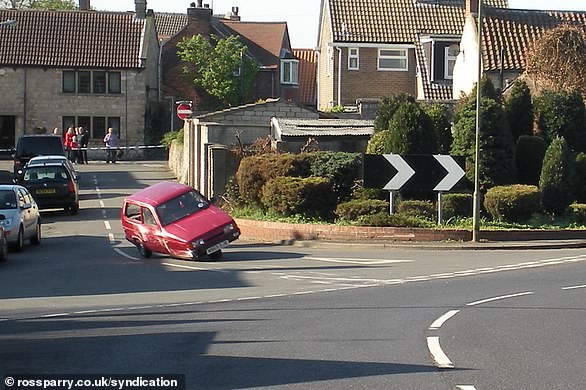