‘Leave our nation be’: France tells Trump not to interfere with country’s politics after US President used riots to attack Paris climate change agreement

France’s Foreign Minister has urged Donald Trump not to interfere in French politics after the US president posted tweets about the protests rocking the country and attacked the Paris climate agreement.

‘We do not take domestic American politics into account and we want that to be reciprocated,’ Jean-Yves Le Drian told LCI television.

‘I say this to Donald Trump and the French president says it too: leave our nation be.’

Trump had on Saturday posted two tweets referring to the ‘yellow vest’ anti-government protests that have swept France since mid-November and sparked rioting in Paris. 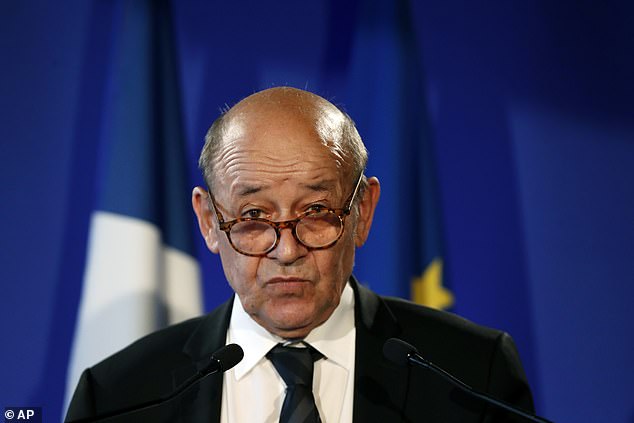 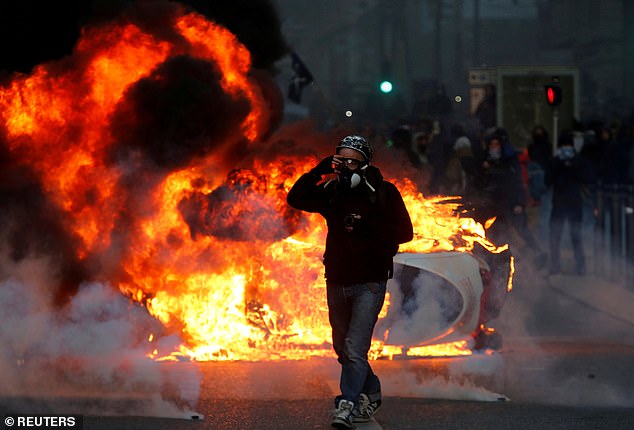 A car burns during clashes with police at a demonstration of the ‘yellow vests’ movement in Marseille, France, on Saturday

‘Very sad day & night in Paris. Maybe it’s time to end the ridiculous and extremely expensive Paris Agreement and return money back to the people in the form of lower taxes?’ he suggested.

Trump had earlier posted: ‘The Paris Agreement isn’t working out so well for Paris. Protests and riots all over France.

‘People do not want to pay large sums of money, much to third world countries (that are questionably run), in order to maybe protect the environment. Chanting ‘We Want Trump!’ Love France.’

The protests in France are not directly linked to the Paris climate agreement which was signed in 2015 and has since been abandoned by Trump, to the dismay of French President Emmanuel Macron and other Western leaders.

Spurred by rising fuel prices – in part due to tax hikes aimed at helping France shift to a lower-carbon economy – the ‘yellow vest’ protests have grown into a broad movement against Macron’s policies and governing style. 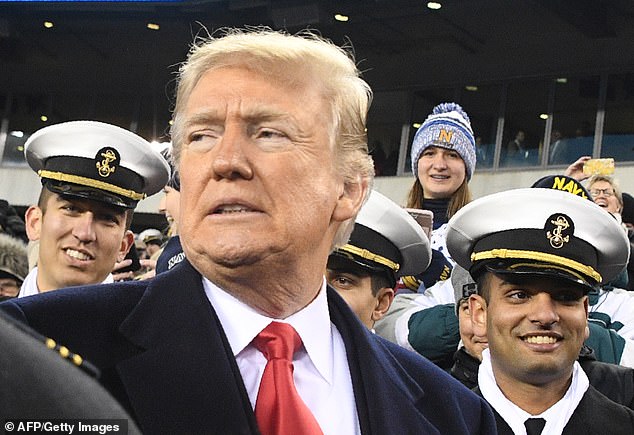 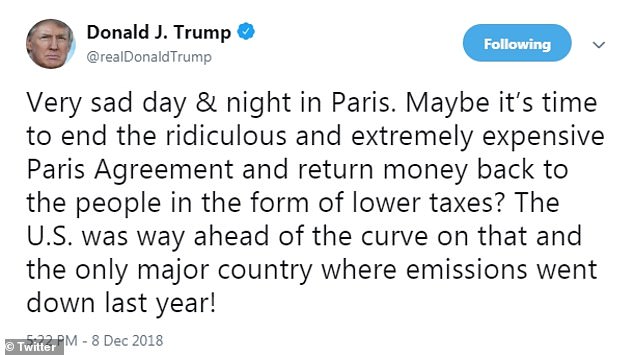 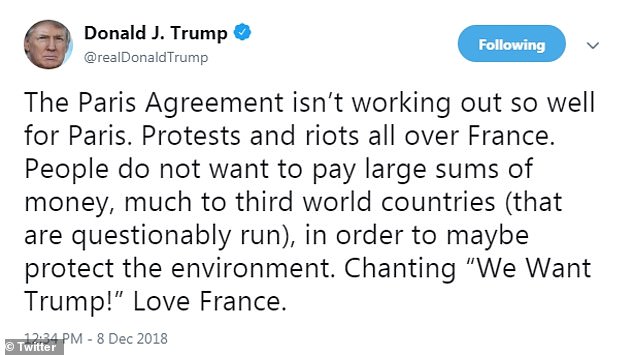 Earlier this week, Trump retweeted one of several posts falsely claiming that French protesters were chanting his name.

The videos that have been used to support this claim were in fact filmed at a far-right protest in London earlier this year.

Other French politicians have also responded angrily to Trump’s latest tweets, including a lawmaker from Macron’s party who dubbed the US leader ‘Donald the Senile’.

Meanwhile, calls mounted Sunday for Macron to bring an end to the crisis gripping France as authorities in Paris and elsewhere counted the cost of another day of violent protests and looting.

Authorities said the anti-Macron riots in Paris had been less violent than a week ago, with fewer injured – but city hall said the physical damage was far worse as the protests were spread out across the capital. 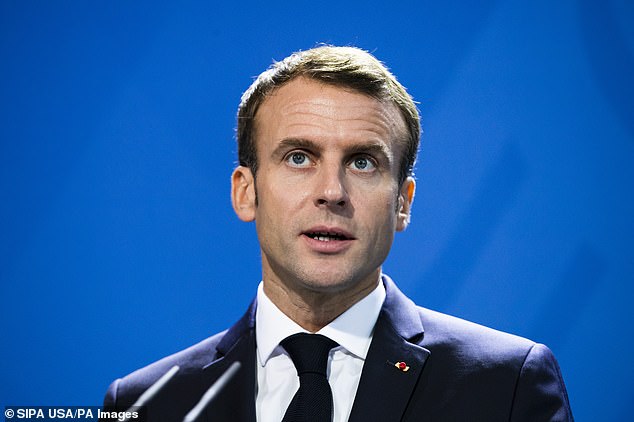 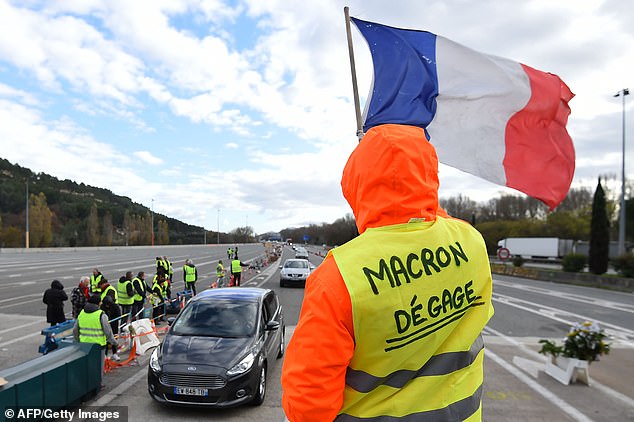 A man with a sign reading ‘Macron resign’ waves a French flag during a protest against rising oil prices and living costs at the highway’s toll of La Barque, near Marseille on Sunday 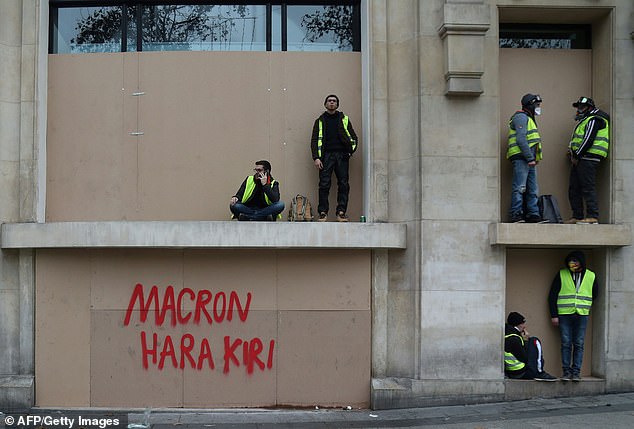 Burned-out cars dotted the streets in several neighbourhoods on Sunday morning as cleaners swept up the broken glass from smashed shop windows and bus stops.

‘There was much more dispersion, so many more places were impacted,’ Paris deputy mayor Emmanuel Gregoire told France Inter radio.

‘There was much more damage yesterday than there was a week ago.’

The southwestern city of Bordeaux was also badly hit by rioting during a fourth successive weekend of nationwide ‘yellow vest’ protests.

What began as demonstrations against fuel tax hikes have ballooned into a mass movement over rising living costs and accusations that Macron, an ex-banker, only looks out for the rich.

Finance Minister Bruno Le Maire said the unrest was creating a ‘catastrophe’ for the French economy, with nationwide roadblocks playing havoc with the traffic and putting off tourists from visiting Paris.

Parts of the city were on lockdown Saturday, with department stores shut to avoid looting along with museums and monuments including the Eiffel Tower. 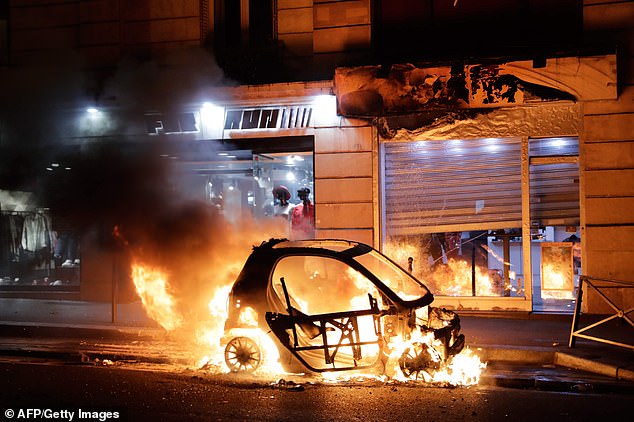 Overwhelmingly made up of people from rural and small-town France, the movement nonetheless includes protesters of various political stripes whose goals range from lower taxes to Macron’s resignation.

‘We need to find solutions that take account of each person’s reality,’ Griveaux told Europe 1 radio.

‘It is anger that is difficult to understand from an office in Paris,’ he acknowledged.

The protests have shown little sign of easing since they began on November 17.

The interior ministry said 136,000 people had taken part nationwide in Saturday’s protests, which turned violent in several other cities including Marseille and Toulouse.

In Paris, around 10,000 ‘yellow vests’ flocked to the Champs-Elysees and other areas – 2,000 more than joined the action last week, as many headed in from the provinces for the first time. 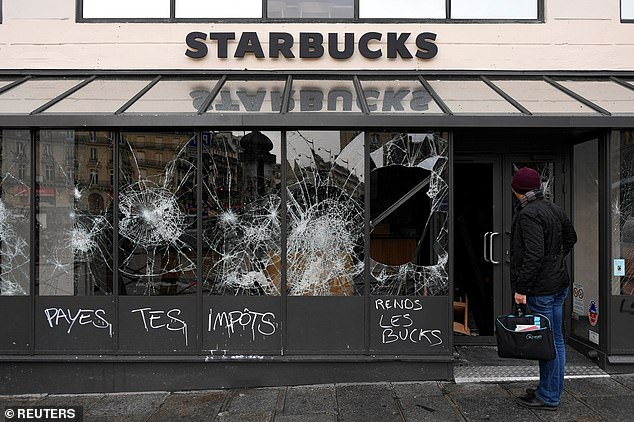 Nationwide, more than 1,700 people were detained – over 1,000 of them in Paris as police vowed ‘zero tolerance’ for anarchists, far-right supporters and others seeking to cause trouble.

More than 500 people were still in custody in Paris by Sunday morning, officials said.

Prime Minister Edouard Philippe had congratulated police on the security operation, which mobilised 8,000 officers and saw armoured vehicles deployed in Paris for the first time.

Thibault de Montbrial, head of the CRSI security think tank, tweeted that authorities had managed to contain the hooligans who have repeatedly hijacked the protests to go on a looting and rioting spree.

But he added: ‘The state cannot mobilise such forces every Saturday, and neither can shopkeepers barricade themselves in faced with violence which is not diminishing.

‘This is a decisive political moment.’

The embattled president – whose name rang out across the Champs-Elysees as protesters shouted ‘Macron, resign’ – is expected to address the demonstrations in a much-anticipated speech in the coming days.

The crisis facing a leader who had been hailed internationally as a youthful defender of liberal values is being closely watched abroad. 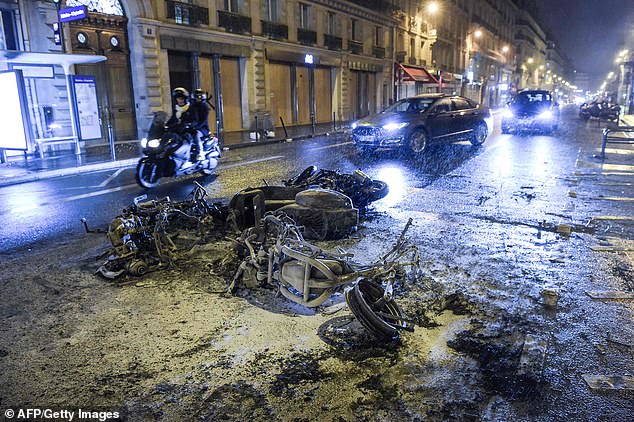 Spain’s El Pais newspaper said it was the first time the 40-year-old was ‘hesitating, giving the impression that he does not know what to do’.

Macron has already offered protesters a string of concessions, including scrapping further rises in fuel taxes – a major climbdown for a president who had vowed not to be swayed, like his predecessors, by mass protests.

So far he has refused to back down on another policy hated by the ‘yellow vests’: his decision to scrap a ‘fortune tax’ on the wealthiest.

Far-right leader Marine Le Pen – who is backed by some protesters from ‘forgotten’ provincial France, but by no means all – called for Macron to ‘recognise society’s suffering and deliver immediate, very strong responses’.

And the movement has spread beyond France’s borders, with around 400 arrested at a ‘yellow vest’ event in Brussels on Saturday and peaceful demonstrations taking place in Dutch towns.

In France, authorities have also launched an investigation into social media activity from accounts allegedly drumming up support for the protests, sources told AFP.

According to Britain’s Times newspaper, hundreds of online accounts linked to Russia were used to stoke the demonstrations.

Citing analysis by New Knowledge, a cybersecurity company, the Times said the accounts spread disinformation and used pictures of injured protesters from other events to enhance a narrative of brutality by French authorities.