Paris in lock down as thousands of security forces prepare to meet potential violence amid ‘yellow vest’ protests. 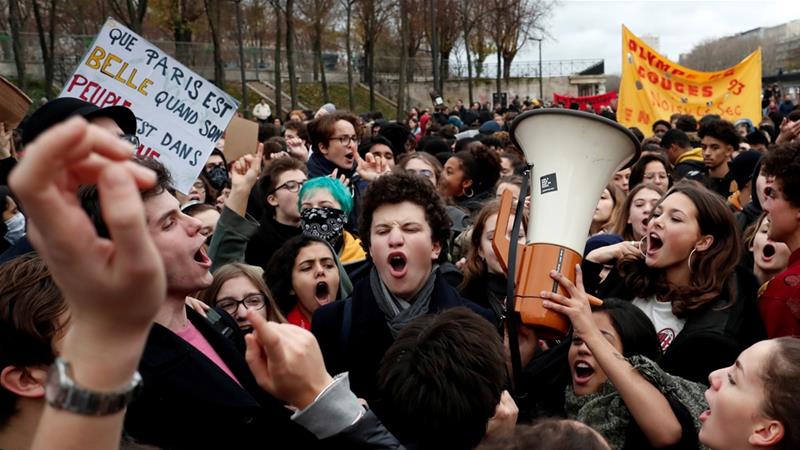 France is preparing for more “yellow vest” fuel tax protests, putting the nation on high alert as tens thousands of security forces were deployed to prevent the demonstrations from turning violent.

The Eiffel Tower and other tourist landmarks in Paris were shut on Saturday, shops were boarded up to avoid looting and street furniture removed to prevent metal bars from being used as projectiles.

President Emmanuel Macron’s government has warned that the protests will be hijacked by “radicalised and rebellious” crowds and become the most dangerous yet, after three weeks of demonstrations.

Macron announced earlier this week that the planned hikes in petrol and diesel taxes, which sparked the protest movement, would be cancelled outright.

But prominent protesters have said they will descend on Paris anyway, with a broader set of economic demands including lower taxes, higher salaries, cheaper energy costs, better retirement provisions and even Macron’s resignation.

About 89,000 police were deployed across the country.  Of these, about 8,000 were deployed in Paris to avoid a repeat of last Saturday’s mayhem, when rioters torched cars and looted shops off the famed Champs Elysees boulevard, and defaced the Arc de Triomphe with graffiti directed at Macron.

“We just had Interior Minister Christophe Castaner himself who came along to talk to the riot police. He no doubt reassured them that today they will not run out of tear gas reserves, like they did last Saturday,” Al Jazeera’s David Charter reported from Paris.

“Police forces are determined to make sure that the violent scenes aren’t repeated, but I don’t think they can guarantee that, because there are so many people here… everybody is converging on this area, and they’re aiming at the Arc de Triomphe, and the Champs Elysees,” Charter added.

Protesters, using social media, have billed the weekend as “Act IV” in a dramatic challenge to Macron and his government’s policies.

Castaner said that he expects radical elements to be present in Paris and that “the past three weeks have given birth to a monster that has escaped its creators.”

But protesters believe they are fighting for a fair cause.

“There is a rising of the people’s rage, and it’s caused by a single reason – the government’s policies that only look to take from the poor to keep for the rich,” Taha Bouhafs, an activist in Paris told Al Jazeera.

Prime Minister Edouard Philippe on Friday evening met a delegation of self-described “moderate” yellow vests who have urged people not to join the protests.

After the meeting a spokesperson of the movement, Christophe Chalencon, said Philippe had “listened to us and promised to take our demands to the president”.

“Now we await Mr Macron. I hope he will speak to the people of France as a father, with love and respect and that he will take strong decisions,” he said.

This grassroots movement made President Macron suspend a fuel tax increase. Here’s what you need to know about France’s “yellow vest” protests. pic.twitter.com/ut4u3dQLxz

Authorities say the protests have been hijacked by far-right and anarchist elements bent on violence and stirring up social unrest, in a direct affront to Macron and the security forces.

An Elysee official has said intelligence suggested that some protesters would come to the capital “to vandalise and to kill”.

The US embassy issued a warning to Americans in Paris to “keep a low profile and avoid crowds”, while Belgium, Portugal and the Czech Republic advised citizens planning to visit the capital over the weekend to postpone their visit.

Eric Drouet, one of the initiators of the protests, called on people to protest on the roads and motorways surrounding Paris, “where there is nothing to break and nothing to destroy” but where they can “shout out” their anger.

Macron, who has not spoken in public since he condemned last Saturday’s disturbances while at the G20 summit in Argentina, will address the nation early next week, his office said.

On Friday evening, he visited a group of police in their barracks outside Paris.

Navigating his biggest crisis since being elected 18 months ago, Macron has left it largely to his prime minister, Edouard Philippe, to deal in public with the turmoil and offer concessions.

But he is under pressure to speak more fully as his administration tries to regain the initiative following three weeks of unrest that are the worst since the 1968 student riots.

The French retail federation on Friday put the cost of the protests to its members at close to $1bn, according to the Financial Times.