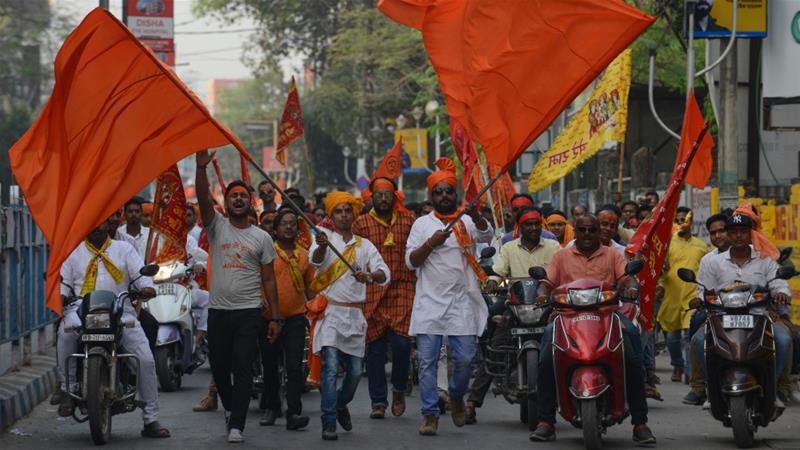 At least four people have died in India’s eastern state of West Bengal after communal clashes broke out during a Hindu religious festival in which thousands of people took to the streets, some carrying swords and sticks, to mark the birth of the Hindu god, Rama.

One person was killed in the town of Purulia when the Ram Navami processions began on Sunday, while a second died after being shot at on Monday during clashes in the town of Kankinara near the state capital, Kolkata, officials told Al Jazeera on Friday.

A third man was killed in Raniganj on Tuesday, and a 16-year-old boy was reported missing in Asansol on the same day. His body was found on Wednesday.

Authorities banned gatherings of more than four people in parts of West Bengal and blocked access to the internet in the towns of Asansol and Raniganj to quell the violence, in which dozens of homes, businesses besides a mosque were attacked.

Tapas Banerjee, a politician from the Trinamool Congress, which rules West Bengal, said police were investigating the deaths and vowed to punish the perpetrators of the violence.

“For now, all we can say is that our priority is to bring the situation under control. The culprits will be punished in time,” he told Al Jazeera.

The ban on public gatherings and the internet shutdown in Raniganj and Asansol will remain in place until April 4, he added.

Nearly a hundred people have been arrested across the state over the violence, according to local media

Critics have accused the rally organisers, which include Hindu nationalist or Hindutva groups and officials from India’s ruling Bharatiya Janata Party (BJP), of instigating the violence in West Bengal, with one observer saying armed rallies to mark Ram’s birth were “unprecedented” and aimed at fostering a “militant Hindu” identity in the state.

A BJP official, however, called it an “old tradition”, while another blamed Muslims for the clashes.

Tensions between Muslims and Hindus have increased in some places since Prime Minister Narendra Modi came to power in 2014.

Critics accuse Modi and the BJP of undermining India’s secular ideals by trying to redefine it as a Hindu nation. The majority of India’s 1.3 billion people are Hindus, while Muslims make up about 14 percent of the population.

Under Modi, attacks on Muslims accused of eating beef or killing cows, an animal considered sacred in Hinduism, have increased. Religious minorities have also been subject to derogatory comments by politicians linked to the BJP.

The violence in West Bengal began on Sunday, and spilled over into Monday and Tuesday, when supporters of Hindutva groups and the BJP defied police orders against carrying arms and, according to media reports, marched through Muslim majority neighbourhoods in several towns.

Participants in the rallies shouted anti-Muslim slogans, local media reported, resulting in the confrontations that spiralled into violence.

In the town of Asansol, family members of 16-year-old student Sibtulla Rashidi, the son of an imam, told the Indian Express newspaper that he went missing during clashes that erupted there on Tuesday.

His body was recovered the next day, and the New Delhi-based newspaper reported that he was suspected to have been beaten to death.

Imdadul Rashidi, the imam, appealed for calm on Thursday, according to the Indian Express, telling a prayer congregation that he would leave Asansol if members of the Muslim community there retaliated with violence for his son’s death.

“I want peace. My boy has been taken away. I don’t want any more families to lose their loved ones,” he said.

Clashes were also reported in the states of Telangana and Bihar, where demonstrators set fire to a mosque and reportedly hoisted the saffron flag of the Hindu nationalists there.

Police in the three states have launched investigations against three prominent politicians linked to the BJP over the violence, according to media reports.

Babul Supriyo, a BJP federal minister from West Bengal, who is under investigation for charges that include rioting, has blamed the Trinamool Congress as well as Muslims for the violence in West Bengal.

“Hindus were being attacked,” he told Al Jazeera. “The ruling party’s policy of Muslim appeasement is the cause of the series of clashes in Bengal.”

Earlier in the week, in a post on Twitter, Supriyo said: “goons from the minority community” had torched shops and “pulled Hindus out from their houses and assaulted/injured them with choppers & swords”.

The BJP has been riding a wave of Hindu nationalism in the country, and now holds power in 21 of India’s 29 states. West Bengal is one of the few states it has never ruled, and it has struggled to gain ground there.

Apoorvanand, professor at the University of Delhi, said the armed Ram Namavi processions were aimed at courting Hindu votes ahead of next year’s general election.

“What they [the BJP] are doing is instilling a militant feeling in the Hindus of Bengal, giving them a false sense of empowerment over their neighbouring Muslims,” he told Al Jazeera.

Saira Shah Halim, an activist in Kolkata, said she was “alarmed” by the rising influence of Hindutva groups in her home state.

“No one used to go around town with sticks and swords,” she said. “West Bengal is a very welcoming society. We haven’t seen anything of this sort – where 16-year-old boys are lynched – in decades.”