Beer consumers have become more conscious of their drinking habits during the pandemic, turning to flavour rather than alcohol for their buzz.

The number of no-alcohol beers entered into this year’s Melbourne Royal Australian International Beer Awards has more than doubled on last year, reflecting a widespread trend for low- and no-alcohol ales. 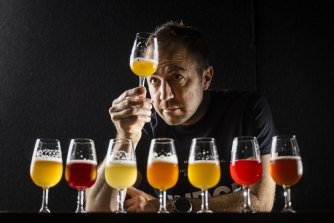 The awards, held at the Melbourne Showgrounds this week, are decided by a panel of 60 judges, who assess beer from 355 breweries in 20 countries.

“That’s reflective of what we’re seeing in trade and bottle shops and in consumer trends really, that people are looking for that lower, no-alcohol option but still getting all the flavour beer can afford,” he says.

Damian Nieuwesteeg, head organiser of the event, says the popularity of no-alcohol options could be attributed to people thinking more carefully about their alcohol consumption, especially during COVID-19.

“I think that’s one of the things we’ve seen out of COVID – that there has been a lot more drinking at home since we haven’t been able to go out, and then people started to be more mindful about their [alcohol] consumption.”

Fox says there are often differences between non-alcoholic and regular beer that have to be taken into account when judging.

“We do have allowances, I guess, knowing that when you don’t have alcohol there is a certain textual difference in the beer,” he says.

Due to these differences, Nieuwesteeg says, judges are always made aware of the alcoholic content of the beer to ensure fairness.

Despite those allowances, Fox says judges are looking for a lot of the same characteristics they would see in other beers.

“So we’re looking at its appearance and how it presents in colour and in clarity and head retention,” he says. “Then we’re looking at aroma and flavour and moving through that same process.”

“At the end of the day, we’re really just looking for balance, and if they have no alcohol and still have great balance in the beer then that’s what we’re after.”