An ammunition depot has exploded in Crimea just days after a series of explosions destroyed at least seven Russian warplanes at a nearby air force base.

Video purportedly shows a huge fireball explosion at a temporary military storage facility in the village of Mayskoye near the city of Dzhankoi in northern Crimea.

The Russian-appointed administrative leader of Mayskoye, Sergei Aksyonov, confirmed to TASS news agency that ammunition had detonated in the village and said he was investigated the circumstances surrounding the explosions.

The explosion comes just days after a series of devastating explosions destroyed at least seven Russian warplanes and demolished ammunition storage facilities at the Saki air force base in Crimea. 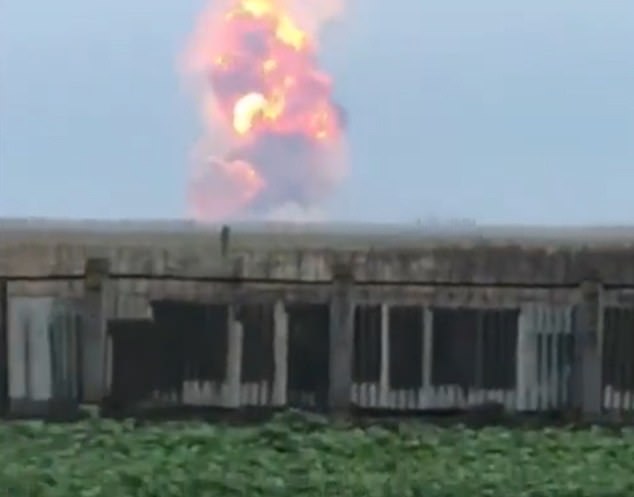 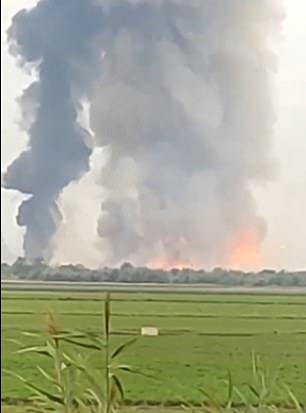 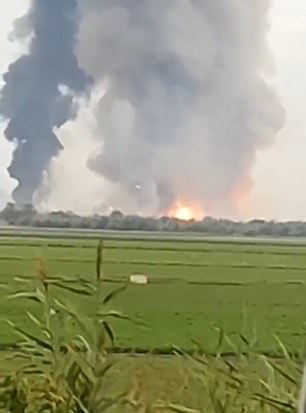 Russia’s Defence Ministry today said there were no serious casualties after the fire broke out at a temporary storage area of the ammunition depot.

Residents from the village are now being evacuated as footage appeared to show a series of explosions at the ammunition depot.

‘I left for the village of Mayskoye, Dzhankoy district,’ Aksyonov said. ‘The circumstances of the incident are being investigated.’

Earlier on Tuesday, RIA Novosti reported a fire on a transformer substation near the town of Dzhankoi in Crimea.

The explosion marks yet another embarrassing loss for Russian President Vladimir Putin – just days earlier a series of blasts ravaged the Saki air force base in Crimea.

Russia denied any aircraft were damaged in last week’s blasts – or that any attack took place. But photos of the Saki base in Crimea published by US-based satellite imaging company Planet Labs PBC clearly showed at least seven fighter planes had been obliterated in what is widely thought to have been a Ukrainian strike.

Ukrainian officials stopped short of publicly claiming responsibility for the explosions, but said at least nine planes had been destroyed and mocked Russia’s explanation that a careless smoker might have caused ammunition at the Saki air base to catch fire and blow up.

If Ukrainian forces were, in fact, responsible for the blasts, it would be the first known major attack on a Russian military site on the Crimean Peninsula, which the Kremlin annexed from Ukraine in 2014.

Russian warplanes have launched untold numbers of strikes on Ukraine’s southeastern regions from the Saki airbase.

Planet Labs’ photographs, taken roughly 24 hours after the explosions at the Saki base in Crimea showed roughly one square mile of grassland burned to a crisp.

Several craters marked the ground near the tarmac – typically the sign of a powerful explosion – and the smouldering wreckage of several jets are clearly visible.

The two runways meanwhile bore no apparent damage and appeared to still be operational, while some of the fighter jets on the flight line had been moved farther down the runway and had seemingly escaped the explosions.

The base has been home to the Russian 43rd Independent Naval Assault Air Squadron since Moscow seized Crimea.

The squadron flies Sukhoi Su-24s and Sukhoi Su-30s and has been instrumental in delivering air support and strikes across southeastern Ukraine.

Crimea holds huge strategic and symbolic significance for both sides.

The Kremlin demands that Ukraine recognises Crimea as part of Russia as a key condition of any potential ceasefire agreement.

Ukraine has vowed to drive the Russians from the peninsula, with president Volodymyr Zelensky declaring earlier this week: ‘Crimea is Ukrainian, and we will never give it up… The Russian war against Ukraine and the whole of free Europe must end with Crimea and its liberation.’

This is a breaking news story, more to follow…