The first neo-Nazi to have his passport cancelled on national security grounds is a former Australian soldier, raising fears the Australian Defence Force is at risk of infiltration by extremists.

Conor Sretenovic’s passport was cancelled by the federal government last year after ASIO advice that he may pose a national security risk if allowed to travel overseas to take up arms in a foreign conflict.

The 28-year-old graduated at Kapooka army base in New South Wales about 2016 and served in the army for 18 months before embracing the nation’s underground white supremacist movement, according to sources aware of his activities and Mr Sretenovic’s own communications, which have been leaked.

It is unclear when he became radicalised or if he was a neo-Nazi while serving. But between 2017 and 2020, Mr Sretenovic plunged deeply into the neo-Nazi community, eventually styling himself as leader to a small band of extremist adherents and networking with white supremacists in Victoria, NSW, Queensland and overseas.

In January 2020, Foreign Minister Marise Payne cancelled Mr Sretenovic’s passport on the basis he was preparing to fight with the notoriously neo-Nazi Azov Battalion in Ukraine. Mr Sretenovic remains an active neo-Nazi, say sources who know him.

Mr Sretenovic's military past points to an insidious problem facing the ADF: the infiltration of extremists into the defence and veterans community. 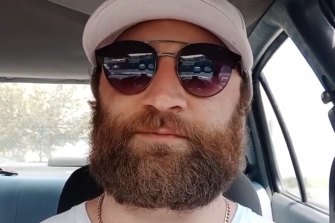 Conor Sretenovic, a former Australian Defence Force member, is the first neo-Nazi to have his passport cancelled on national security grounds.Credit:

A major investigation into Australia’s growing neo-Nazi movement by The Age, The Sydney Morning Herald and 60 Minutes has identified several former ADF personnel who have joined, or considered joining, extremist groups.

Victorian neo-Nazi leader Tom Sewell, who founded the National Socialist Network in 2019, is a former infantryman, and an Australian veteran is a senior member of overseas terror group Combat18’s Australian cell.

Melbourne man Daniel Todisco, another National Socialist Network member and former employee of Crown casino, claims to have served as a Commandos reservist. And former soldier Ethan Tilling and former airman Jared Bennet had both been investigated by ASIO over their links to extremist groups, official sources confirmed.

Serving military personnel have also flirted with extremist groups before disavowing their views. Former Royal Australian Regiment member Damien de Pyle was a member of the extremist Lads Society, and Barry Laming, a reservist rifleman and serving army trainer, said he joined an online National Socialist Network chat group this year, which involved completing a brief vetting process, before “I realised they were actually quite fringe so cut ties”. 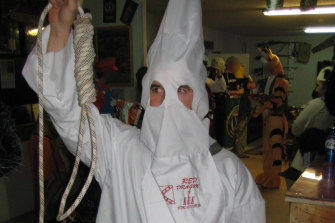 A special forces soldier dressed in a Ku Klux Klan outfit at a party at soldiers’ bar the Fat Ladies Arms in Afghanistan.

Australian soldiers have also been caught displaying white supremacy symbols on deployment in Afghanistan, including a special forces soldier who dressed in a white Ku Klux Klan outfit and another who briefly displayed a swastika flag on his armoured vehicle before being ordered to remove it.

An ADF spokesperson would not comment on individual cases, but said suitability for employment was assessed through personnel management and security vetting reviews and that Defence worked with law enforcement agencies to identify illegal or inappropriate activity “including … ideologically motivated extremism”.

ASIO Director-General Mike Burgess said the intelligence community was working closely with the ADF to prevent it unwittingly training white supremacists. But he said some neo-Nazis were “absolutely” attempting to join the armed forces by concealing their views when recruited.

“They can mask that, carry through, get well-trained. And when they leave, they’re improved. And that is a concern if they then use that to train others or go to acts of violence themselves,” Mr Burgess said. 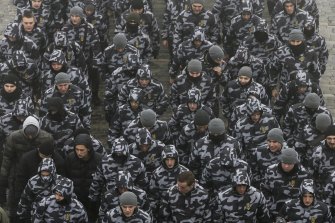 Volunteers with the far-right Azov Battalion during a rally in Kiev, Ukraine, in 2018.Credit:AP

Mr Sretenovic was intercepted by ASIO and the Australian Border Force at Melbourne Airport in January 2020 bearing a ticket to Belgrade, Serbia. He later told supporters he was travelling to meet a girlfriend and Serbian relatives. But state and federal authorities, who had spent months investigating him, believed he was planning to travel to Ukraine to fight with the Azov Battalion, a neo-Nazi militia fighting Russian forces.

His activities have been confirmed by multiple sources, including figures close to Mr Sretenovic and officials who monitor terrorism activity, as well as in disclosures Mr Sretenovic made in encrypted chat rooms while using an alias.

The cancellation of Mr Sretenovic’s passport was significant enough to feature in Mr Burgess’ Annual Threat Assessment speech last year, although Mr Sretenovic’s name and military background were not disclosed.

Mr Burgess declined to talk about individuals but said ASIO recommended a person’s passport be cancelled only in grave cases.

“Our concern there is [the neo-Nazi] actually coming back to Australia, battle-hardened with skills,” he said. 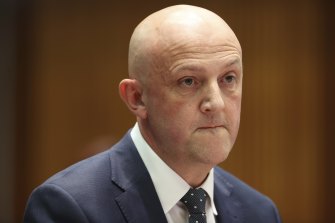 ASIO Director-General Mike Burgess says some neo-Nazis are attempting to join the armed forces by concealing their views when recruited.Credit:Alex Ellinghausen

Mr Burgess has stressed how neo-Nazi cells, while not new in Australia, are growing and posing a “grave” terror threat. The internet, encrypted communications platforms and various global events have promoted the cells’ expansion and enabled members to secretly network across state and international borders. Officials believe Mr Sretenovic is one of four Australians, including two other ex-ADF personnel, who have sought to fight with the Azov Battalion.

While the federal government has cancelled the passports of dozens of suspected Islamic State fighters from Australia, Mr Sretenovic is the first white supremacist to lose his right to travel on national security grounds.

Contacted by The Age and the Herald, Mr Sretenovic appeared both cocky and menacing, warning: “You f—ing stay away, mate … I’ve been watching you for a couple of years, Mr McKenzie.”

Mr Sretenovic declined to answer questions, other than saying the accusations authorities had raised about him were baseless.

“Why am I still walking the streets and have never been charged?” he said.

ASIO can only request that the Foreign Minister cancel a passport if it “suspects on reasonable grounds” a passport holder is “likely to engage in conduct that might prejudice the security of Australia or a foreign country”.

Mr Sretenovic’s complex background makes him a case study for what Mr Burgess describes as the changing face of ideological extremism in Australia – one involving younger men who do not present as skinheads and who “display few overt signs of their extremist ideology”.

Mr Sretenovic was born in Taree, NSW, in 1992 and was raised by a single mother. When he was nine, he, his mother and her partner moved to Tasmania. After later moving to Bathurst, NSW, Mr Sretenovic briefly attended two private schools, The Scots School and St Stanislaus’ College, but struggled to fit in and moved to Kelso High School.

Those who knew him at the time describe Mr Sretenovic as a bright but troubled student who excelled at cycling but was a loner. In early 2010, he moved to the Gold Coast where, for the first time, he met his biological father. But the pair fell out and Mr Sretenovic completed his secondary schooling living alone.

After his mother died in 2015, he returned to NSW and joined the army, graduating from Kapooka in October 2016. He also trained as an industrial electrician.

It’s unclear when Mr Sretenovic began his descent into radicalism, but by 2018 he was living in Melbourne and active in Antipodean Resistance, an ultra-secretive neo-Nazi group that believes in a coming race war or white power revolution.

In 2019, he posted photos online of himself dressed head to toe in camouflage, holding an automatic shotgun and with a Nazi death symbol obscuring his face.

Mr Sretenovic was extremely security conscious, hiding behind online aliases in encrypted chat rooms. But several online videos he shared with his neo-Nazi adherents under the handle “Systematic Revolutionary” in 2019 and 2020, and which he believed he had deleted, have been obtained by this masthead from confidential sources.

In the posts, he hints at his difficult upbringing, referencing “a broken family”. But he mostly dispenses neo-Nazi propaganda, urging others to prepare for “a revolutionary time”.

“It’s a pivotal point internationally for us as a movement, us as fascists,” he said on one video. “The lines in the sand are being drawn.”

In his online videos, Mr Sretenovic rails against ASIO and the Australian Federal Police, using an image of ASIO Director-general Mr Burgess as his online avatar.

“The system right now is in overdrive to stop people like us from connecting," he ranted in another video message.