Family GP, 54, who took £188,000 from her ‘darling angel’ elderly patient, 87, and spent it on home repairs and a birthday present for herself gets to keep her job 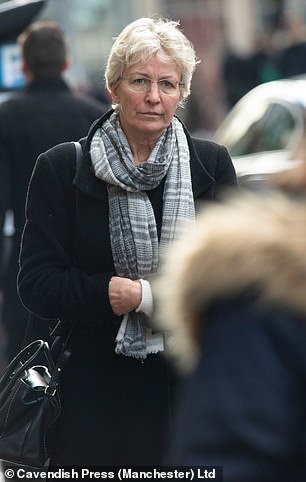 Dr Andrea McFarlane, pictured outside the General Medical Council in Manchester took £600-a-month from a retired teacher which she used to pay household bills, birthday presents and even to service her own car

A senior family GP who accepted more than £188,000 in a series of cash payments from an elderly patient whom she referred to as her ‘darling angel,’ is to keep her job.

Dr Andrea McFarlane, 54, pocketed £600 a month from the retired teacher and then used it to pay for household repairs, a birthday present to herself, servicing her car and also on petrol to take her sons to rugby matches.

She also accepted a three diamond ring given to her from the patient.

During a six year period between April 2008 and January 2014 McFarlane who had been going through a divorce, ‘nurtured’ an inappropriate friendship with the widow and ‘took full advantage in terms of the financial benefit to her,’ it was said.

In a thank you letter she wrote to the unnamed patient, the GP a senior partner at The Crown House Surgery in the market town of Retford, Lincolnshire, said: ‘Thank you also for all the other goodies and help towards all that life needs sorting.

‘My new tyres, my new locks, fixing my computer, the car service, the gutters needed fixing, the electrician needed to fix lights, the petrol to rugby matches, and so much more.

‘You will never know how much help you have given me. My darling angel, you give me more than I can imagine.

‘As for my birthday I do know of a beautiful thing I have wanted for many years, a silver bracelet. I promise to get that from you, when you see it you will agree it is quite special.’

She was found guilty of serious professional misconduct and was suspended from the practise for 12 months.

Last October she resigned from the surgery and has offered to return the diamond ring to the old woman’s family.

The panel ruled the doctor had ‘indirectly encouraged’ the patient to give her money but cleared McFarlane of being ‘predatory’ and of ‘influencing her’ into parting with her savings.

Chairman Martin Jackson said: ‘The Tribunal accepted, that during this period a special friendship developed between the two to such an extent Patient A and her husband considered Dr McFarlane and her children as their extended family, and that she and her children also considered Patient A and her husband as their extended family.

‘The extent of the friendship was evident from the correspondence between Patient A and Dr McFarlane. The Tribunal noted that after the death of her husband, Patient A spent part of the Christmas period with Dr McFarlane’s family, and that at other times, they had spent time together gardening and had been on outings together.

‘Furthermore, it noted that Dr McFarlane still visits Patient A regularly at the care home. The Tribunal reminded itself that during the early part of the friendship, Patient A had given gifts to Dr McFarlane which included small amounts of money for her sons.

‘Whilst her actions were improper, there had been no clinical issues arising from Dr McFarlane’s misconduct, and no harm came to Patient A. The Tribunal was satisfied Dr McFarlane had not actively sought or obtained gifts or financial payments from Patient A. She poses no significant risk to patients and poses no significant risk of repeating her misconduct now or in the future.

‘The evidence demonstrates Dr McFarlane was a valued and competent GP and that there was a public interest in maintaining the services of competent doctors.’

The hearing last year heard  McFarlane started treating the patient in 2003 when she aged 72 and the pair became friends.

In September 2012 the old woman’s husband passed away and in June 2017 she suffered a severe stroke and she was admitted to a care home where she has remained.

Patient A made 92 cash deposits into the doctor’s bank account over an 18 month period.

In a letter to the patient, McFarlane suggested that she change her regular GP to someone else from the practice as the GMC are ‘very strict’ about doctors taking advantage of a patient.

The note read: ‘You mentioned, would it be better if you changed doctor? Yes of course it would, as a doctor should not have a close relationship with a patient. We need to be careful as people may not understand our close friendship.’

Later McFarlane emailed a surgery colleague saying: ‘This delightful lady requests to have you as her usual doctor as the wait time with my reduced hours are too long. Hope it is ok that I have changed her to you.’ 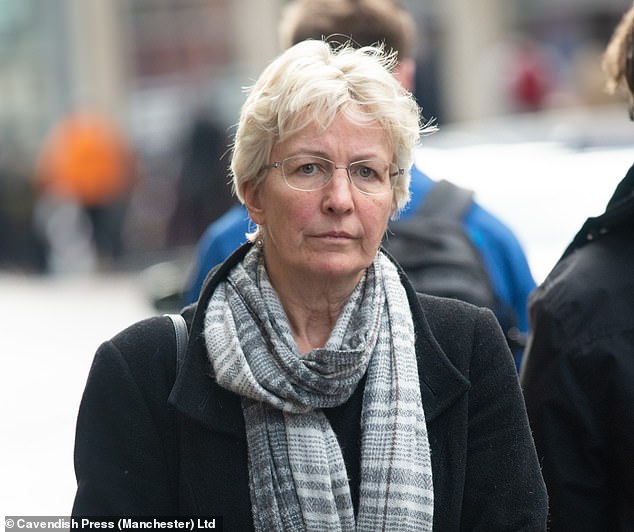 Dr McFarlane had an improper relationship with her patient. At an employment tribunal she was suspended from her practise for 12 months 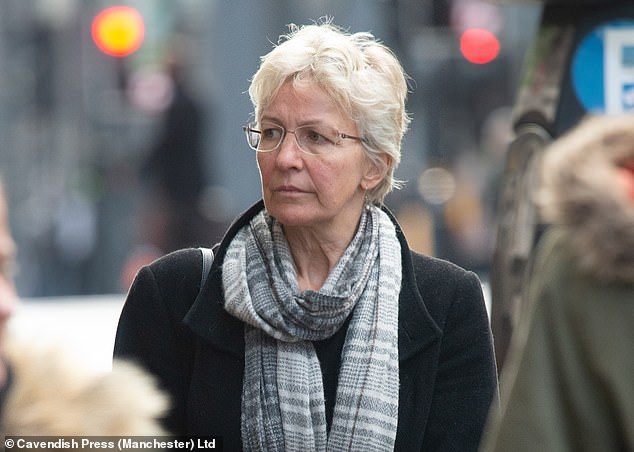 Dr McFarlane received gifts and payments of up to £73,000 from the elderly woman known only as Patient A. The largest was uncovered when the woman was moved to a care home and her nephew found ‘thank you’ notes from Dr McFarlane 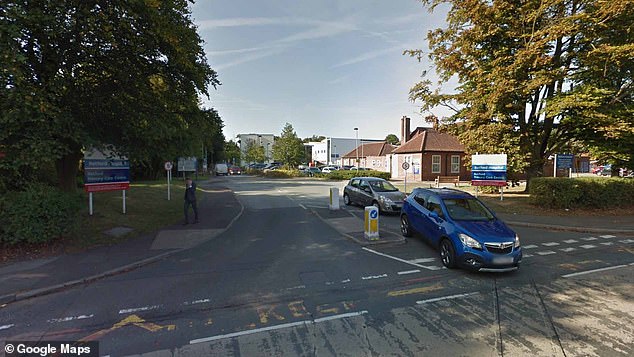 The GP was a senior partner at The Crown House Surgery in the market town of Retford, Lincolnshire

Jeremy Lasker lawyer for the General Medical Council called for McFarlane to be struck off saying: ‘People are allowed to do what they want with their money but a doctor patient relationship has a particular place in society – the sanctity of which needs to be protected. Such relationships are susceptible to abuse on different ways.’

‘An excellent solution which would allow me to make sure you get the very best treatment and would not cause this professional dilemma, would be if you changed your doctor to one of my colleagues.

‘If anyone asked you why you changed, you could say that it was because I have gone part-time and that my waiting times are now longer.’

Later McFarlane emailed her colleague to suggest that the patient wanted to change her regular GP. She wrote: ‘This delightful lady requests to have you as her usual doctor as the wait time with my reduced hours are too long.. Hope it is ok that I have changed her to you.’

Patient A’s nephew told the hearing: ‘I was aware that my auntie had a close relationship with the doctor. Sometimes during family visits there would be cards on the mantelpiece from the doctor. There were one or two photos with the doctor in.

‘I never visited my auntie on an occasion when the doctor was there. I never knew my aunt was giving gifts of any sort. I found out when I was clearing up her house.

‘I first knew from the cheques that were left. As I went through the process of clearing the house, I found more and more letters and cards.

‘There was very little evidence of my aunt investing any kind of money in her own house. Her and my uncle were not known to splash out. My understanding was that when she was no longer able to drive, she gave her car to Dr McFarlane’s sister.

‘I wanted to try and get an understanding as to the amount of money which had gone out of her account over the years.

‘My initial complaint was firstly about the two large cheques. The gathering of all of this probably took me a few months. It only came to light that Dr McFarlane was a friend around 2012. I was not aware that she had any other special friends. My aunt was pretty much housebound. Before she had her stroke, her bank account was down to £2000.’

Patient A’s housekeeper Jane Heath said: ‘When I first started working for her, she was very fit for her age and very independent. She was in her early 70s and she and her husband led a simple life. I knew Dr McFarlane but I didn’t have a lot of contact with her, we met on a couple of occasions at her house. The visits were social.

‘A year before she went into the home her health deteriorated. She was a very private person, she did say she missed her husband but never went into detail. I ran some errands for her, I paid for newspapers for her, did her shopping and got anything she needed. I would go to the bank to collect any money that she needed. She would give an old-fashioned cheque. The money would be about £200 or £300.

‘She had told me about a three diamond ring she had given to the doctor. I did ask her if she’d told her family.’

McFarlane initially claimed some of the money she received came from her ex-husband as part of her divorce settlement. but she subsequently admitted accepting money from the patient.

She denies disclosure of confidential information about other patients and refutes claims she received gifts ‘because of her influence on the patient.’

The doctor’s lawyer Andrew Hurst QC said: ‘Dr McFarlane’s actions were not predatory and she did not actively set out to obtain gifts and money from Patient A. The patient had the capacity to make her own choices and she exercised an independent choice to give money to Dr McFarlane.’