The mothers who went hungry so children could eat: JAMES FRANEY reports on the families who are starving after Russian troops stopped Ukrainian aid from reaching village

One mother sells her son’s beloved bicycle to make sure he is fed, while another scrabbles around for supplies in between Russian shelling.

Natalya Shablevskaya and her family have spent the past four weeks cowering in a cramped, freezing cellar, barely the size of a double bed, living off whatever food they could get their hands on.

Their four-bedroom house in the tiny village of Vaslikiv, close to Mykolaiv – a strategically important city 70 miles north-east of the port of Odessa – was regularly rocked by the reverberations of Russian bombing.

She would wait for a lull in the bombardment before clambering upstairs in the early morning to fetch food for her ten-year-old son Danil, mother Olga, 63, and father Peter, 72.

‘We got used to eating very little because we were gripped by fear,’ says Miss Shablevskaya, a post office clerk, who has now reached the relative safety of Odessa. 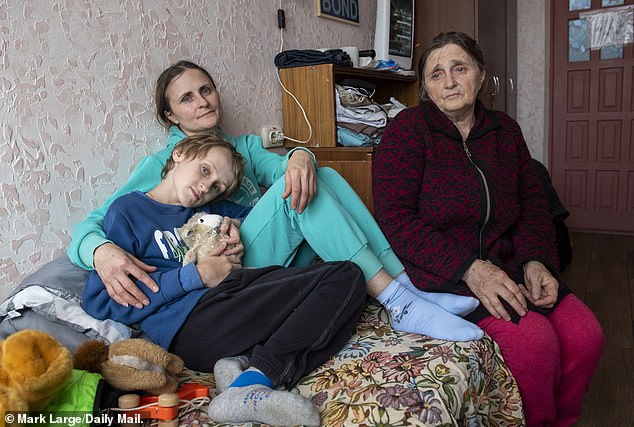 Natalya Shablevskaya, 42, with her ten year old son, Danil, age 10, and her mother, Olga, 63, who fled from Vasilkiv, a village in the Mikoliav region occupied by Russians

‘You never knew when the next explosion was coming. We had just a few basic supplies that the Russians had given us, but most of it was out of date. They were disgusting. They were not fit for humans. We had no other choice.

‘The Russians were preventing Ukrainian aid from arriving to our village and blocking all humanitarian corridors.’

The 42-year-old single mother has no doubt about who is the architect of this policy. She says Vladimir Putin is ‘absolutely’ trying to recreate the Ukrainian famine of 1932-33.

Ukrainians call it the Holodomor, or ‘hunger extermination’, a horrifying event that killed at least four million people.

‘We had to decide who got what. We gave most of what we had to Danil and Peter.’

Peter, a former farmer who suffers from a severe form of Parkinson’s disease, is bedridden and barely able to communicate.

He desperately needs supplies of insulin to ease his condition. To make matters worse the family had no gas, no electricity and no running water for more than a month.

On the very rare occasions they managed to get the ingredients for a hot meal, they burned some of their books to start a fire. 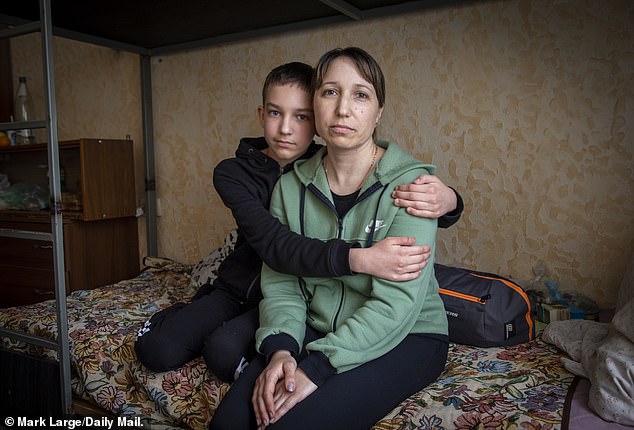 ‘The worst thing was the damp and the cold,’ says Miss Shablevskaya.

‘We wrapped ourselves in whatever blankets we had but the temperatures dropped close to freezing at night.’

The Mail met the family at a shelter in the southern port that has been welcoming displaced Ukrainians fleeing Russian aggression in other parts of the country.

They left Mykolaiv at 4am yesterday after a volunteer with good military contacts managed to offer them a way out.

But the conflict is never far away. As dawn broke in Odessa on the day of their arrival, air raid sirens blared out across the city amid unverified Russian claims that Putin’s forces had shot down a Ukrainian military plane nearby.

And Miss Shablevskaya says her son still has nightmares about the constant explosions that became a daily routine back at home.

‘Earlier he heard two bangs and asked if we were still safe,’ she says.

The family plans to move to Poland, where they have relatives who form part of the now four-million strong Ukrainian community in the country.

For now, all of them are packed into a tiny bedroom with one bunkbed and two single beds.

Scattered across the room are the few possessions that they managed to grab before running for their lives.

‘We have been wearing these same clothes for the past month,’ Olga says.

Among them are some of Danil’s Lego bricks, which he takes with him everywhere.

‘I want to go to England one day,’ he says in perfect English. ‘It is such a beautiful language.’

In the room next door is another child refugee, 12-year-old Alexander Kisilyov.

His mother Olga Kisilyova, 39, explains how she had to sell her son’s toys and belongings, including his cherished bicycle, so she could put food on the table in their one-bedroom, first-floor flat in the Russian-occupied city of Kherson. 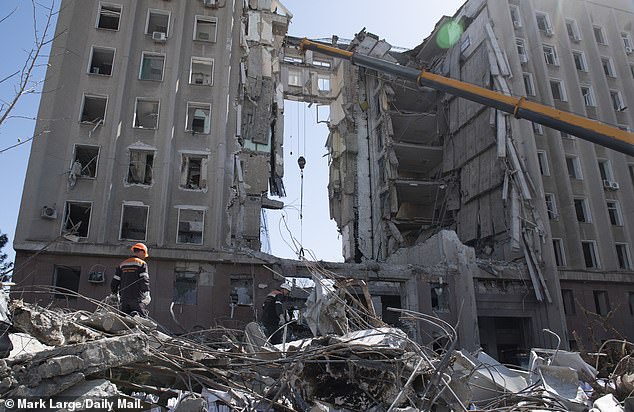 Rescue workers still searching through the rubble at the Mykoliav Regional State Administration building after it was hit by a Russian missile, Mykoliav, Ukraine

‘The food shortages started a month ago,’ she says.

‘We had to get up at 4am to queue up in the freezing cold outside the supermarkets.

‘Supplies were not getting through, so everything cost more. Prices of food had quadrupled by the time we left three days ago.’

‘We had to dip into our savings to buy basic things such as bread, milk and sugar,’ says Mrs Kisilyova, a nursery school teacher.

Alexander, who is also known as Sasha, is a keen wrestler who used to eat meat or pasta before taking part in his competitions.

‘I skipped meals so that he had enough food,’ Mrs Kisilyova explains as she hugs her son tightly.

They were among the 45 people who scrambled on to a 20-seat minibus to escape Kherson, leaving Vladimir behind.

‘We heard the sounds of shelling everywhere as we left,’ she says. ‘I was praying to God to save me and my son.’

Mrs Kisilyova and Alexander made it to Odessa on Good Friday.

And yesterday, on Easter Sunday, worshippers packed into the 19th-century Cathedral of the Assumption of the Blessed Virgin Mary as Catholics in the city celebrated the festival – Orthodox Christians will celebrate next week.

Addressing his congregation, Bishop Stanislav Szyrokoradiuk had a message of hope: ‘Despite the war, let us pray for peace this Easter.’ One woman in her late 20s fell to her knees and made the sign of the cross.

Calling upon that human spirit, we are supporting a huge push to raise money for refugees from Ukraine.

Donations to the Mail Force Ukraine Appeal will be used to help charities and aid organisations providing such essential services.