London: Fading vaccine immunity is fuelling a spike in coronavirus cases in Britain, with the country’s early rollout success now working against it.

Weeks from the onset of winter, infection and hospitalisation rates in the United Kingdom are more than six times higher than large nations in Europe, while the death rate is three times greater.

The “unusual and slightly worrying” situation looms as a test of the government’s determination to live with the virus and keep the economy and society functioning as normal. It will also be closely monitored by other countries which started their inoculation programs much later than the UK and might soon encounter their own waning immunity complications. 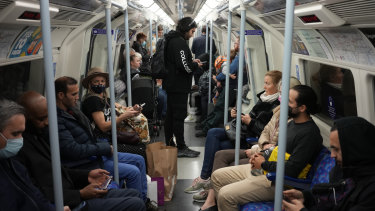 Masks are not mandatory in England except for in the London Underground, which suffers from low compliance.Credit:AP

New cases hit 44,000 on Wednesday – up 16 per cent on the previous week. Most were detected in children and younger adults.

Warning daily infections could soon rise to 100,000, Health Secretary Sajid Javid resisted calls for the government to implement its “Plan B” winter contingency which would reintroduce some restrictions such as mandatory indoor mask wearing.

“This pandemic is not over,” Javid said. “Thanks to vaccinations, the link between cases, hospitalisations and deaths has significantly weakened but it is not broken.

“We must all remember this virus must be with us for the long term, and it remains a threat to our loved ones and the progress we’ve made to getting our nation closer to normal life.” 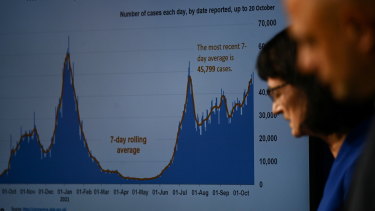 Experts stressed the AstraZeneca, Pfizer and Moderna vaccines were still hugely effective at preventing the vast majority of hospitalisations and deaths but there is growing evidence that protection from catching the virus wanes six months after a second shot.

The Financial Times calculated that 75 per cent of older people in the UK have gone five months since their second jab, compared to 35 per cent in Italy and France.

Mask wearing is also much less common in Britain than on the continent. However, in Scotland, where masks are compulsory in public venues and schools, case rates are higher than in England, where face coverings are not. 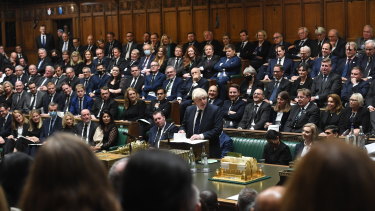 British MPs have come under fire for not setting an example by wearing masks in the crowded House of Commons. Credit:Jessica Taylor

Asked why it did not make sense to make masks mandatory in English venues, Javid replied: “We still feel it was the right decision to try to learn to live with this virus.”

NHS England medical director Professor Steve Powis said concerns about fading immunity should not discourage people from getting their first and second dose, and a booster shot if over 50 years of age or clinically vulnerable.

“It’s a natural phenomenon that immunity reduces over time – it will occur,” he told reporters.

“And that’s exactly why we are recommending a booster dose is an important part of our armament particularly as we go into winter.”

The UK has rolled out about 4 million booster jabs but has faced criticism it has moved too slowly on that program and the rollout of vaccines to children.

Overall, 79 per cent of people aged 12 and over in the UK have had two doses.

Eastern Europe is also battling a surge in infections, with funeral directors in Romania unable to keep up with demand. On Wednesday, Russian President Vladimir Putin endorsed a week-long workplace shutdown to curb fatalities.

The Russian government earlier announced a record 1028 deaths for the previous 24 hours, although the true figure is thought to be much higher.

Romania is registering 19 daily deaths per million people – one of the highest rates in the world and 10 times higher than the rate in Britain.

Deaths in the UK are hovering at an average of 140 per day.

As the northern winter approaches, medicos are worried about a perfect storm of high coronavirus cases, resurgent flu season and huge backlog of procedures caused by lockdowns in 2020 and 2021.

About 8000 people are in hospital with COVID – nowhere near the deadly first and second waves and well below what the government’s expert advisory committee had projected for this time of year.

Two doses of the Pfizer or AstraZeneca vaccine are estimated to be 96 per cent and 92 per cent effective against hospitalisation with the Delta variant, respectively.

Paul Moss, a professor of haematology at the University of Birmingham’s Institute of Immunology, said reinfection was “something that will have to live with society around the world”.

Moss said the severity of reinfection was less severe because people have built up immunity and antibodies.