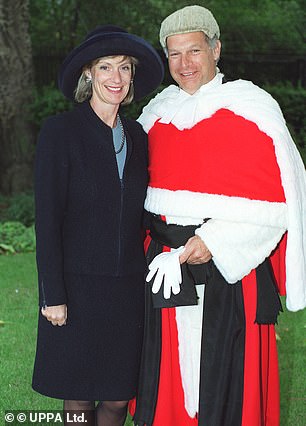 Former Crimewatch editor Lady Angela Neuberger, whose husband Baron David Neuberger ruled on the case of Britain’s exit of the EU, ‘simply did not see’ another car she pulled out in front of

An ex-Crimewatch editor and titled wife of a former Supreme Court judge caused a crash on a country road – leaving a motorist badly injured – through careless driving, a court heard.

Lady Angela Neuberger, whose husband Baron David Neuberger ruled on the case of Britain’s exit of the EU, ‘simply did not see’ another car as she pulled out of a side road near Bridport in Dorset.

The 74-yer-old’s Mercedes collided into the Smart car, in a crash which left the female driver trapped inside the vehicle.

The victim suffered injuries to her abdomen, wrist, knee cap, as well as bruising, and said she thought she was going to die in the hours afterwards.

Police and fire crews turned up at the scene of the crash to find Lady Neuberger reporting a broken toe.

Now Lady Neuberger has been fined £615 by magistrates and been given six points on her licence after admitting to driving without due care and attention.

At the time of the crash, on June 29 last year, Lady Neuberger was driving her C-class Mercedes near her home when she emerged from a side road onto the B3157 between Burton Bradstock and West Bay.

Despite looking both ways she pulled out in front of the Smart car, causing the crash.

Helen Diffey, prosecuting, told Weymouth Magistrates’ Court how police were called along with firefighters, ambulance crews and an air ambulance.

She said: ‘The victim was medically trapped and nurses came to her and treated her for severe neck pain. The defendant was meanwhile out of her vehicle and complained of a broken toe.’

Photos of the crash scene show the wrecked Smart car with its roof having been cut off by firemen to get to the victim. 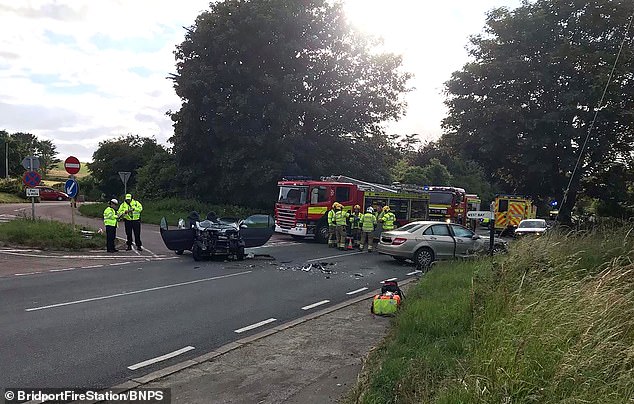 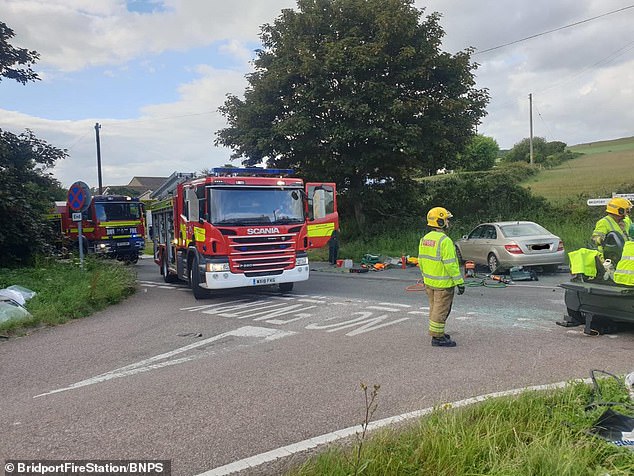 In a police interview, Lady Neuberger told officers she had been driving infrequently at the time due to the prior national lockdown. Pictured: Firefighters at the scene of the crash

Angela Holdsworth, known as Lady Neuberger is a TV producer and used to be an editor of Crimewatch.

Her husband is Baron David Neuberger, who served as President of the Supreme Court of the UK from 2012 to 2017.

The top-ranking judge ruled on the case of Britain’s exit from the EU.

In 2007, he succeeded Baron Nicholls of Birkenhead as Lord of Appeal in Ordinary – one of the ‘Law Lords’ who sit in the House of Lords.

His position mean the was elevated to Baron Neuberger of Abbotsbury.

His wife Angela became Lady Neuberger as a result.

The couple have three children together, all of whom are solicitors.

In 2016 Lady Neuberger tweeted that Brexit was ‘mad and bad’ at the time her husband was to decide on the case brought by Gina Miller that the UK had to have Parliament’s consent before triggering Article 50.

Along with her work on Crimewatch, Lady Neuberger has been involved in a number of television series, including the BBC 2 show, Out of the Doll’s House and Chanel 4’s ‘The People’s Duchess – a documentary about the life of Georgiana, Duchess of Devonshire.

Lady Neuberger has also written books, including one based on the Out of the Doll’s House.

In a police interview, Lady Neuberger told officers she had been driving infrequently at the time due to the prior national lockdown.

The driver of the Smart car wrote in a statement how she required two operations following the crash and was undergoing extensive recovery programmes.

She said: ‘I cannot say June 29 took away my life but for the first 18 hours, I thought I was going to die four times.’

She added she was ‘trapped in my own home for six weeks’ due to her limited mobility and ‘doesn’t know when she will drive again’.

She also spoke of the crash’s impact on her mental health.

Lady Neuberger pleaded guilty to driving without due care and attention.

Kevin Hill, mitigating, said his client ‘simply did not see the other car’ and claimed she had checked both directions before pulling out.

Referring to Lady Neuberger’s own experiences of driving in the area, Mr Hill explained her main focus was looking to her left as she was aware motorcyclists may travel around a ‘notorious’ bend.

‘She cannot express exactly why that is because she simply did not see it but as she said in police interview, she has a theory with some understanding of how she caused this terrible accident.

‘She would have been looking up the hill and there is a shadowy area of the road. The other car was dark in colour as it was grey.

‘She believes she must have looked over or across the car and simply did not see the car.’

Mr Hill added that Lady Neuberger accepted she was ‘firmly at fault’ and profoundly apologised for her actions. 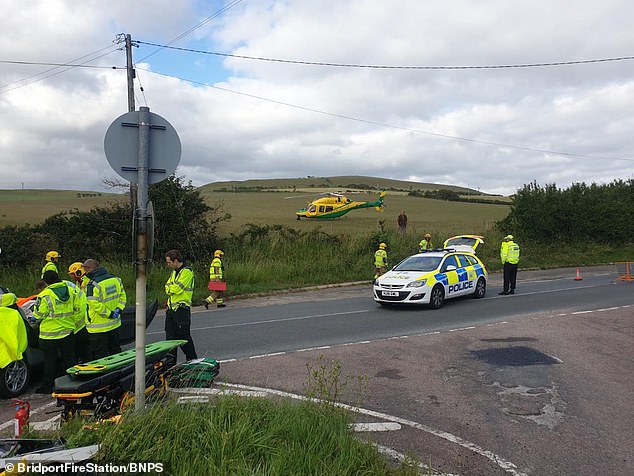 Kevin Hill, mitigating, said his client ‘simply did not see the other car’ and claimed she had checked both directions before pulling out. Pictured: Police, firefighters and paramedics at the scene

He said: ‘She has wanted to contact the victim and express her remorse and regret but has been advised not to do so due to this case.’

Mr Hill noted Lady Neuberger has ‘contributed greatly to the local community’ in many roles, as well as holding a number of ‘significant roles’.

Magistrates described it as a ‘nasty accident’ and endorsed Neuberger’s driving licence with six penalty points.