London/Brussels: As if Brexit tensions were not bad enough, Brussels has opened a new row with the UK by backing Greece’s long-standing claim over the Elgin Marbles.

When the UK and Greece were both European Union members, the bloc tried to remain above the fray and adopted a position of studious neutrality in the dispute. 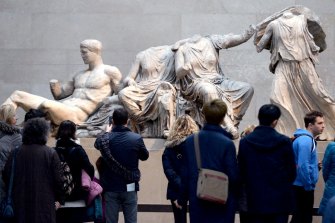 Visitors look at The Parthenon Marbles, also known as the Elgin Marbles in the British Museum.Credit:Facundo Arrizabalaga

However, a day after Prime Minister Boris Johnson said the Elgin Marbles were not being returned, the Greek EU commissioner announced it backed Greece’s claim.

Margaritis Schinas, European Commission’s vice president for Promoting the European Way of Life, said: “The Marbles belong in the Parthenon. In these difficult times, universal cultural heritage should uplift humanity, not divide it.”

The call was backed by former Labour Europe minister Denis MacShane who said on Twitter: “He’s Greek. [It’s] like asking a Brit official if Falklands belong to Argentina.

“Why are we so proud to defend a syphilitic looter? We made the Nazis hand back stolen art [and] sculpture after 1945.”

The 2500-year-old Elgin Marbles are a long running sore in Britain’s relations with Greece. They are a collection of sculptures, inscriptions and architectural features which originally formed part of the Parthenon temple and other structures on the Acropolis in Athens.

Lord Elgin, a Scottish nobleman, soldier and diplomat, has been accused of stealing them or bribing officials to remove them from the Parthenon at the beginning of the 19th century.

They are now housed in the British Museum, which insists the Marbles were legally bought from the Ottoman Empire, which ruled Athens at the time.

The Brexit trade deal included a clause which relates to the return of unlawfully removed cultural objects but both the UK and EU have said this refers generally to stolen artefacts and not specifically to the Elgin Marbles.

Johnson told Greek newspaper Ta Nea on Friday: “I understand the strong feelings of the Greek people – and indeed Prime Minister Mitsotakis. “But the UK has a firm long-standing position on the sculptures which is that they were legally acquired.”