For decades, 136-year-old Sad Otter gazed mournfully at visitors to the Melbourne Museum in Carlton.

With his alarmed eyes and glumly turned-down mouth, the giant otter's rather "dodgy" taxidermy job was probably due to its creators having never seen a living specimen, according to the museum. 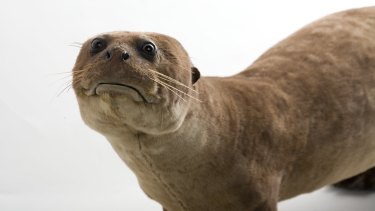 Sad Otter is one of Melbourne Museum’s most famous residents.Credit:Jon Augier/Museums Victoria

In 2012 Sad Otter found modest internet fame when he was featured on satirical website Bad Taxidermy, having been moved to the museum's so-called "dead zoo" of 750 taxidermied animals – Wild: Amazing animals in a changing world. Visitors to the museum can now buy a Sad Otter plush toy in the gift store.

Since its establishment in 2009, Wild has inspired, amused and delighted museum visitors. But after more than a decade, curators are preparing to pack up the motley crew of birds, mammals and reptiles and put them into storage to make way for a new exhibition featuring a 67-million-year-old Triceratops skeleton, hailed as one of the most complete, and best preserved, dinosaur fossils ever unearthed.

Senior sciences curator Kate Phillips, who helped create Wild, says the exhibition's popularity has largely been due to its simplicity.

Set on tiers against a stark white background, the animals and reptiles are stars of their own show. The exhibition is separated into sections for each continent, and interactive displays allow visitors to learn about each animal's habitat, the threats they face from climate change and habitat destruction, and their vulnerability to extinction. 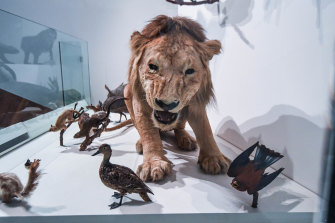 For years conservators have been struggling to protect the specimens, some of which are more than 130 years old, in the open air.

"They've been fighting a really difficult battle because what happens with specimens that are on open display is they're very vulnerable to getting infested with things like clothes moths," Ms Phillips said.

"The insects actually eat the specimens, so the specimens gradually start to disintegrate … It's been quite a challenge and we've had to remove a few specimens that have had quite bad infestations."

Sad Otter has been one near-casualty, having been removed from display and treated in 2017 after becoming infested with varied carpet beetle larvae – another common museum pest. 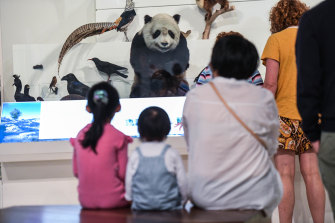 A panda is among the taxidermied animals in the museum’s long-running exhibition.Credit:Joe Armao

After Wild is dismantled at the end of January, the 750 specimens will go into a deep freeze for two weeks to kill any insect infestations, Ms Phillips said, before being preserved behind glass in the museum's vast storage area for posterity.

The announcement sparked an outpouring of dismay among museum-goers on social media on Wednesday afternoon.

Johnny Regan, who took his 11-month-old son Tadhg to see Wild on Wednesday, said he was pleased he'd managed to get one last look at the exhibition. 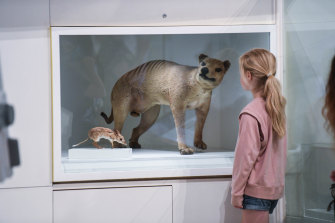 A Tasmanian tiger at the museum also appears to have a curious expression.Credit:Joe Armao

Replacing the "dead zoo" will be a new installation that has the scientific community abuzz: an 87 per cent complete fossil of an adult Triceratops horridus, including its skull and spine.

The specimen is so well-preserved, skin impressions and tendons are still visible.

"Despite its popularity, there are still many unanswered questions about the anatomy and palaeobiology of Triceratops," Dr Fitzgerald said.

"This will be one of a handful of Triceratops skeletons on display around the world in which all bones, from the skull to the tip of the tail, are from one individual animal."

The Triceratops was discovered in 2014 on a private property in Montana, USA.

Wild: Amazing animals in a changing world will be on show until January 26.