Emma Raducanu trademarked her name within hours of her US Open win in her first steps to becoming the ‘first billion-dollar sports woman’.

Emma, who has been heralded as a ‘sponsor’s dream’, is on course to become the highest earning female sports star of all time.

She banked a cheque for £1.8million ($2.5million) – over eight times her total previous career earnings – for her record-breaking win on Saturday.

The young athlete from Bromley, south-east London, became the first British woman to win a grand slam since Virginia Wade’s Wimbledon triumph in 1977, with her 6-4, 6-3 victory over Leylah Fernandez.

Agents have now predicted that top brands will be ‘knocking down Emma’s door’ with endorsement offers worth tens of millions of pounds. 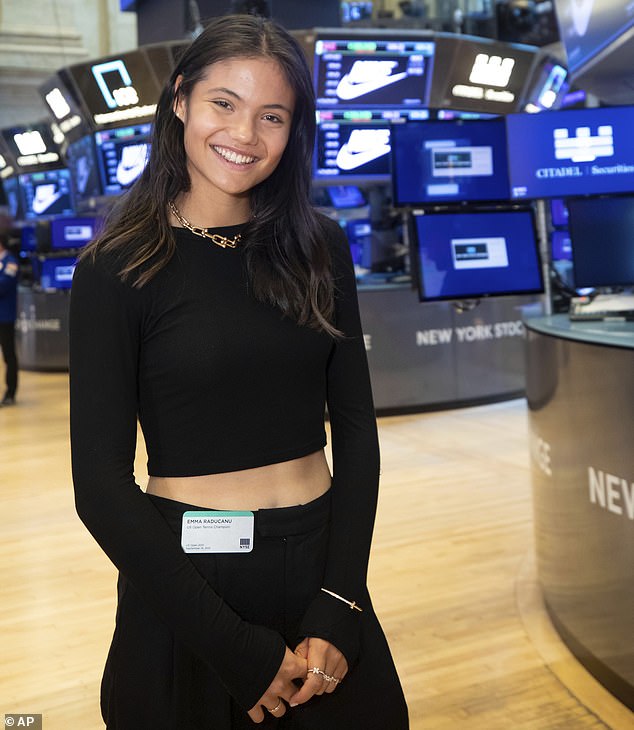 Emma Raducanu, 18, who has been heralded as a ‘sponsor’s dream’, is on course to become the highest earning female sports star of all time 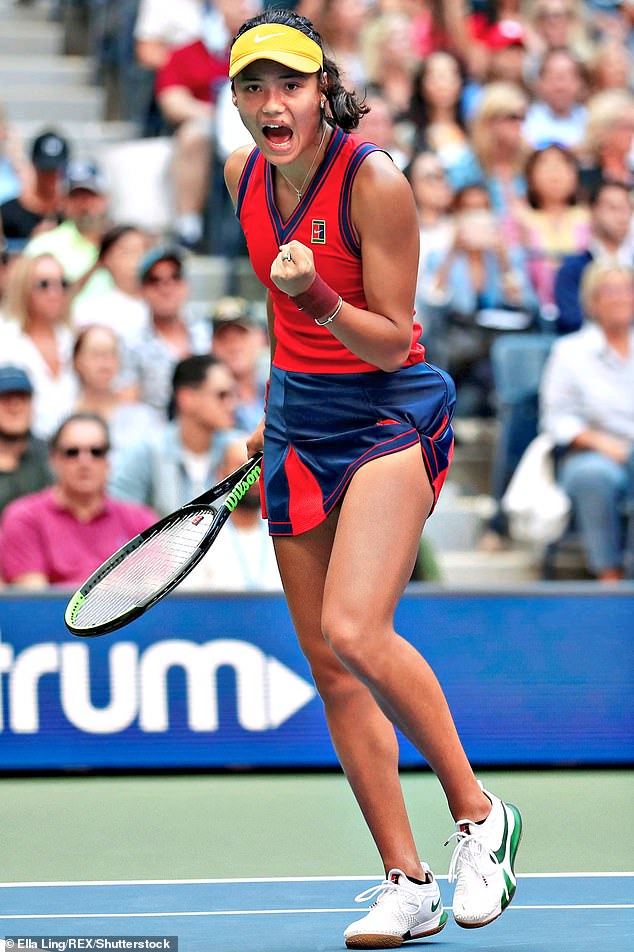 Emma celebrates during the final US Open Championships 2021 on September 11. She banked a cheque for £1.8million ($2.5million) for her record-breaking win

She is already managed by Max Eisenbud, vice-president of tennis at entertainment giant IMG and one of the most powerful agents in sport.

And Emma’s multi-cultural background, being half-Chinese and fluent in Mandarin, is seen as a big part of her landing some huge deals.

Mr Shalit said: ‘In the space of a week, Emma has become a global phenomenon.

‘I already have her down to become the first US$100 million British female sports star.

‘And if she continues on her current trajectory, she will be worth US$1 billion and be the biggest female sports star in the world.’

Emma was two-years-old when her Romanian father Ian and Chinese mother Renee moved the family to the UK.

Mr Shalit said: ‘Emma is a sponsor’s dream. She is a mix of Romania, China, Britain and Canada. She is 18 and she is a gorgeous young woman.

‘She is in a gladiatorial individual sport, where she goes in armed only with a tennis racquet.

‘She was a qualifier in the US and had to get through two competitions. It is quite staggering.’

Mr Shalit added that Emma’s tearful fourth round summer exit from Wimbledon after suffering breathing difficulties only adds to her public appeal. 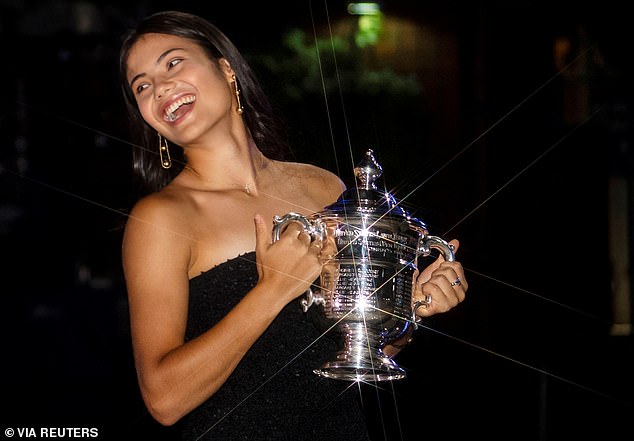 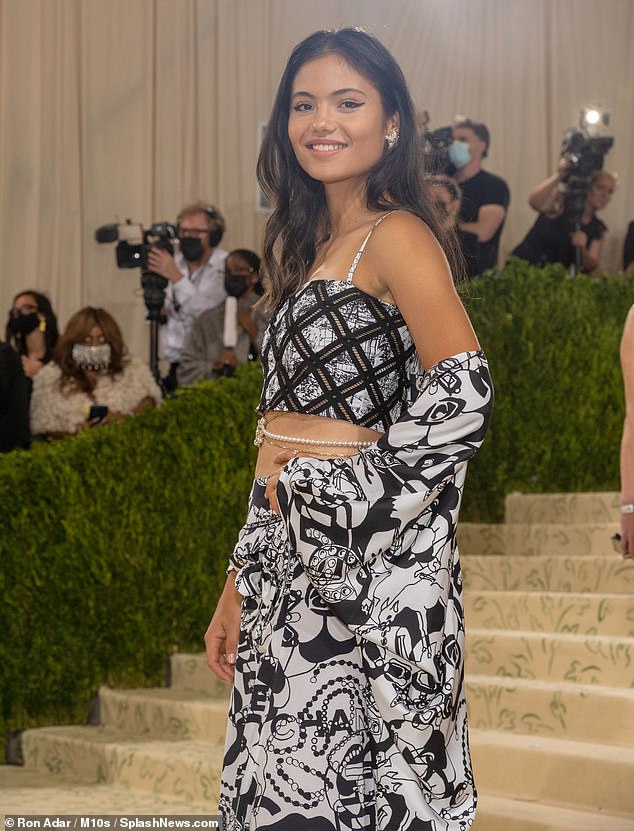 Emma pictured wearing a monochrome outfit from Chanel at the Met Gala on September 13, just days after making history by winning the US Open

He said: ‘She has had to overcome adversity after her stumble at Wimbledon. She has the perfect human interest story. Everything about Emma is the perfect storm.

‘Emma comes along at a unique time in our history during the pandemic when people want to feel positivity and happiness.

‘She represents that positivity and is someone we can all celebrate.’

Emma already has a clothing and shoe deal with Nike and racquet tie-up with Wilson and she appears in the current edition of Vogue magazine.

Her Instagram followers have trebled to 1.2million since she started out as a US Open qualifier three weeks ago.

His negotiations for former world No1 Sharapova, who won Wimbledon as a 17-year-old in 2004, helped her earn £234million on and off court by the time she retired last year. 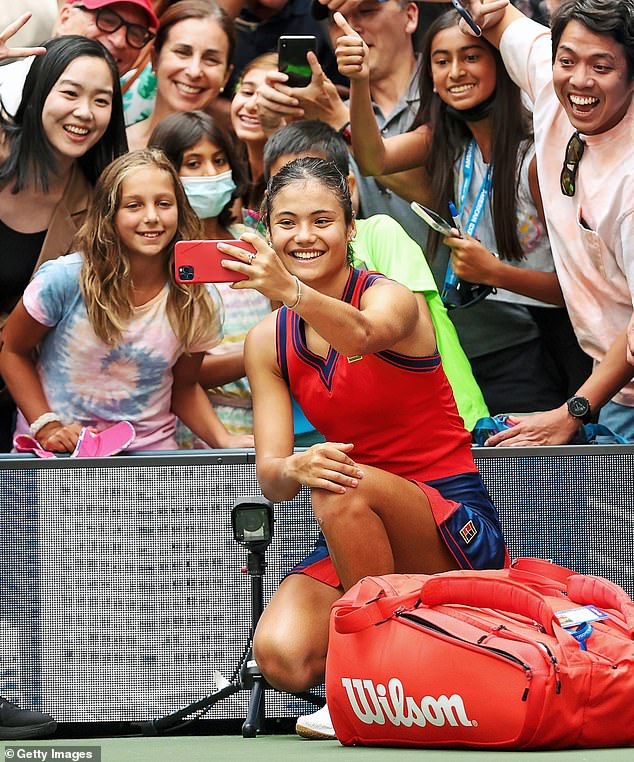 Mr Shalit said: ‘Whatever Nike are paying Emma, they will be back on the phone to her agent to tie her in for as long as they can. The same with Wilson.

‘And anyone sponsoring Emma now will be paying tens of millions of pounds.

‘Leisurewear, sports, health, fitness and lifestyle brands will want to sponsor her and will be knocking down Emma’s door.

‘Every female teenager in the world will be looking at Emma. Whatever brands she is wearing, they will be asking their parents to buy it.’

Emma is now also the overwhelming favourite to win this year’s BBC Sports Personality of the Year award.

Mr Shalit went on: ‘Emma flew out of the country a regular passenger. When she comes back, she will be whizzed through Heathrow as a VIP.’

He said that the biggest potential pitfall for her continued success is coping with newfound pressure in the public eye but is confident she will cope.

The agent added: ‘The spotlight will be on her and there will be pressure and that is where a really strong family unit comes into play.

‘When I look at Emma, I see a loving family and great professional advisers. It looks to me like she is fully protected by a great team.’