This is the spectacular moment an ambitious rescue mission to save a baby elephant from a 25ft-deep well is finally pulled off.

After the calf accidentally plunged down the waterhole in Jharkhand, eastern India, locals hatched an ingenious plan to save it.

For two hours, they pumped gallons of water to float the elephant to the surface, while at the same time using a JCB digger to scrape the ridge of the well into a ramp.

To the frenzied whooping of amazed spectators, the animal eventually clambered out on to the land before lumbering off to be reunited with its herd. 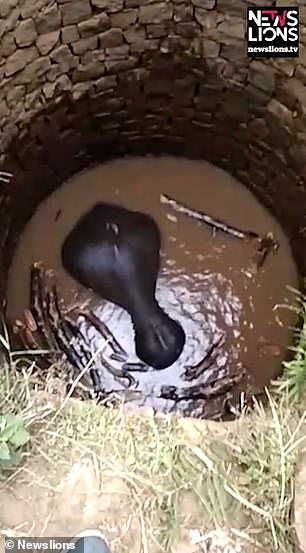 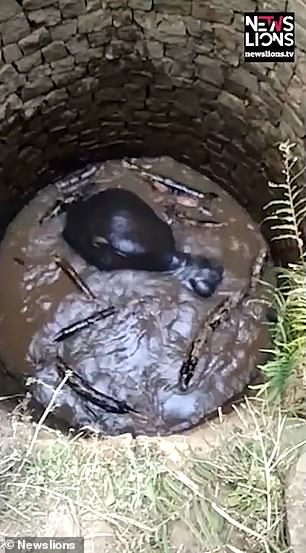 The large grey mammal rolls around in the shallow water in the bottom of the well in Jharkhand, eastern India

Videos from the small village of Bantoli in the state’s Gumla district captured the extraordinary rescue operation.

The large grey mammal is first seen rolling around in the shallow water in the bottom of the well, seemingly distressed.

Locals jump into action and fetch a hose which sprays water into the voluminous farm well at a painfully slow rate.

The clip then cuts and shows the well which has now been filled up – almost two hours later according to local reports – and the elephant rearing its head above the surface. 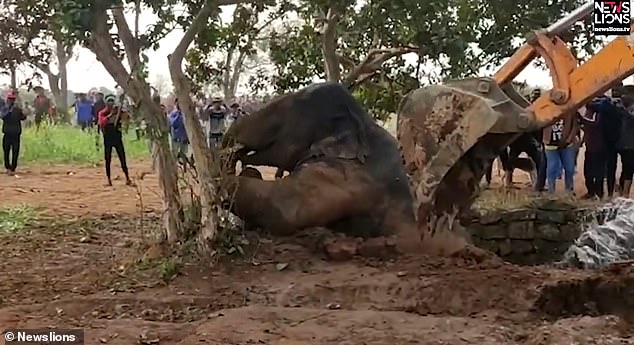 The elephant finally floats to the top and clambers over the ridge of the well, scrabbling its front feet to get a grip on the muddy terrain 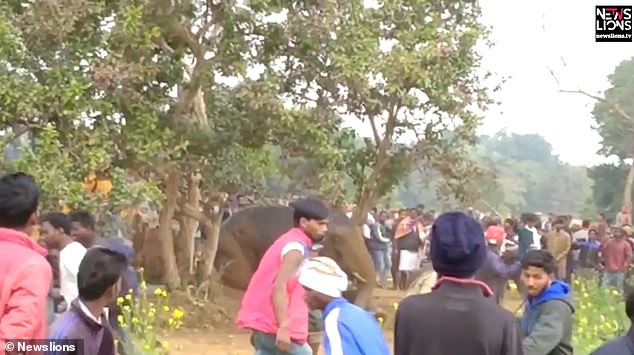 The JCB digger, which has excavated a slope for the elephant to use, is also seen beside the well.

The calf scrabbles its front feet to get a grip on the muddy terrain and finally manages to haul itself up and over on to the land.

By this time, hundreds of onlookers have gathered to watch and shriek wildly as the animal is freed.

Eager to avoid being trampled by the disgruntled calf, they scurry backwards as it heaves itself to safety, but run after it as it lumbers off to join its herd.

It joins three other elephants trudging down a dusty track, while the ecstatic locals continue to cheer.