EIGHT women have been targeted in terrifying wrench attacks as cops hunt a suspect striking in North London.

The man hit his victims, including an NHS nurse,in the Hampstead and Belsize Park areas of the city. 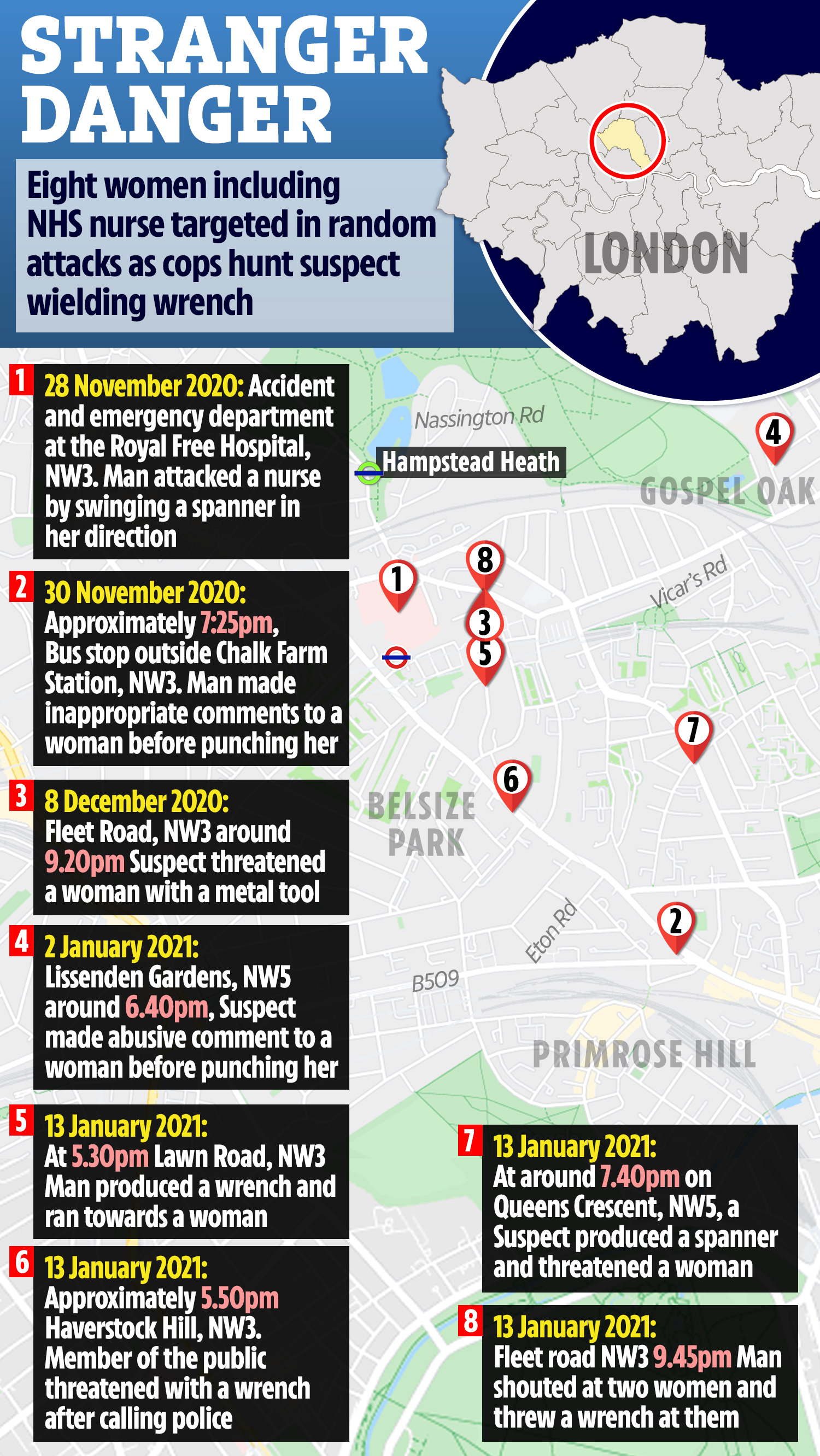 The man is described as white, aged in his 40s or 50s, of stocky build and of medium height.

He is known to approach women and make inappropriate remarks to them before attacking physically.

In a number of attacks the man has been armed with a metal tool, which cops believe to be a spanner or wrench.

The first attack took place on November 28 when walked into the accident and emergency department at the Royal Free Hospital, NW3.

The suspect made inappropriate comments to a female nurse before swinging a spanner in her direction. She was not injured and the man ran off.

Most recently four attacks were carried out all on January 13, all on different women.

At 5.30pm a woman was approached by a man on Lawn Road, NW3 who made inappropriate comments to her.

He produced a wrench and ran towards the woman – she sought help from passing members of the public and the man ran off.

About 20 minutes later, a member of the public called police after seeing a woman being followed by man on Haverstock Hill, NW3. When he intervened, the man was threatened with a wrench.

Two hours later on Queens Crescent, NW5, a woman was approached by a man who made inappropriate comments to her before he produced a spanner and held it in a threatening manner. Members of the public intervened and the man ran off.

Finally, two women were walking on Fleet Road, NW3 when they were approached by a man at around 9.45pm.

He shouted at them and threw an item, believed to be a wrench, at one of the women. They sought help from a nearby shop and the man ran away.

Detective Constable Zoe Di Carlo, from the Central North Command Unit, said: “I am appealing to anyone who knows who this man is to get in contact with police immediately.

“We are investigating a series of incidents where women, often on their own, have been approached and subjected to verbal, and sometimes, physical abuse.

“While no one has been seriously hurt, these incidents will understandably cause concern to the local community.

“I want to reassure people that we are working tirelessly to identify and apprehend the person responsible.”

Detectives are advising people to remain vigilant and call 999 in an emergency.

They would like to speak with anyone who was in the vicinity of any of the incidents, and who saw anything suspicious.

Anyone who can assist is asked to contact police on 101 or tweet @MetCC and quote reference CAD 1416/28Nov20.