The Victorian Health Department said on Friday that it was investigating the source of the contamination, following reports of “unusual and severe symptoms” among at least eight people who had consumed baby spinach from Riviera Farms, in Victoria, which was sold through Costco. 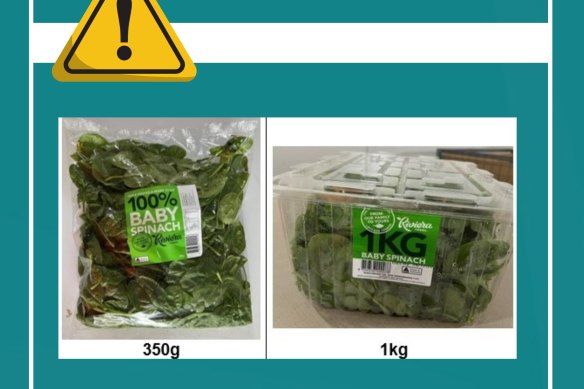 A supplied image of the one kilogram tub of Riviera Farms baby spinach that has been recalled owing to contamination.

The spinach was sold through Costco across Victoria, ACT and NSW with an expiry date from December 16 up to and including December 28, 2022.

Both the Aldi and Woolworths recalls are believed to be connected to the Riviera Farms’ baby spinach.

Rivieria Farms said it appeared that the spinach, which was grown in Victoria, had been “contaminated with a weed which can have health consequences if consumed”.

“Riviera Farms advised authorities immediately after being alerted by one of our retailers and we will continue to work closely with health and food regulators as investigations continue,” the business said in a statement posted to its website.

Dr Danny Csutoros, one of Victoria’s acting deputy chief health officers, said the baby spinach was not safe to eat and should be discarded, with the onset of symptoms occurring within hours of consuming the affected salad leaves.

“Initial investigations are suggestive of accidental contamination of the affected baby spinach,” he said. “The Victorian Department of Health is working closely with other jurisdictions to investigate further.”

As of Friday, there were 47 people in NSW who reported symptoms after eating the spinach and at least 17 needed medical help, according to the state’s health department.

Health authorities said anyone concerned about exposure to the contaminated spinach products should contact Victorian Poisons Information Centre on 13 11 26, and those with severe symptoms should call triple zero.

With James Lemon and Sally Rawsthorne