A court in Amsterdam has refused to resolve a long-running international dispute over the ownership of a 1,000-year-old Buddha statue that contains the mummified remains of a monk.

Residents of two Chinese villages accuse that the human-size holy figure had been stolen from their temple before being bought by a Dutch collector.

The villagers demand the statue be returned to them. 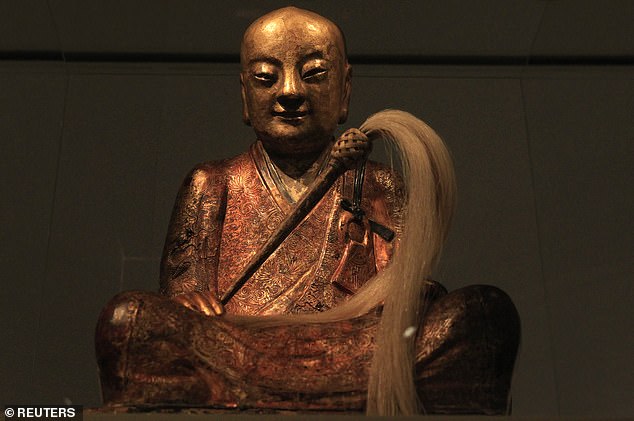 The civil court in Amsterdam threw out the case today, saying in a written ruling that two Chinese village committees seeking ownership of the disputed statue are not legal entities and are therefore ineligible to file a claim.

In China, a village committee is elected from the residents and typically deals with the internal affairs of the village, such as domestic quarrels, security and the development of the community.

It could also represent the village – and in some cases individuals who live in the village – to the public. However, it does not have legal powers.

The Chinese villages, identified by the court as Yangchun and Dong Pu in southeastern Fujian province, say that the statue was stolen from their shared temple in 1995 and was purchased by Dutch art dealer Oscar van Overeem in Hong Kong in 1996.

The court says the collector denies that the disputed statue is the stolen antiquity. The collector, Van Overeem, said in a hearing in October that he did not have the statue anymore.

The villages can appeal against the ruling.

In October, the Chinese villagers appeared at the Amsterdam District Court and made a passionate plea during a hearing for the return of the golden statue.

‘We grew up with the statue. He was there day and night. He is our spiritual leader,’ Yangchun village spokesman Lin Wenqing said shortly after lawyers closed their arguments.

‘For us, it is the most important thing to have him back,’ said Lin, 42, through an interpreter. He was one of six villagers who had travelled from Yangchun to attend the hearing in the Dutch capital.

The statue at the centre of the case depicts a roped monk in a sitting position and measures 1.2 metres tall (3.93 feet).

A scan of the statue in February, 2015, revealed a skeleton inside – said to be that of a Chinese monk who lived nearly a millennium ago during China’s Song dynasty (960-1279).

Controversy about the Buddha arose the same year when a villager of Yangchun saw the statue on TV as it was being displayed at the Hungarian Natural History Museum in Budapest.

The statue was subsequently withdrawn from the exhibition. 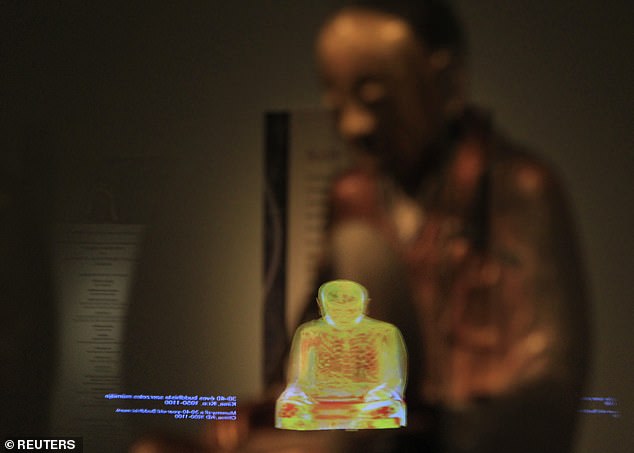 A scan in 2015 revealed a skeleton inside the human-size statue, which dated back 1,000 years

The villagers claim the mummified body is that of Zhanggong Zushi, a local monk who helped treat disease and spread Buddhist belief. When he died at the age of 37, his body was mummified and placed inside the statue.

After the statue was stolen in 1995, the only things left behind were the hat and clothes which are still in the temple, according to the villagers.

They said they were convinced that the statue which Van Overeem bought was their missing idol.

‘There is a very special bond between the villagers and the statue,’ their lawyer Jan Holthuis told the judges. 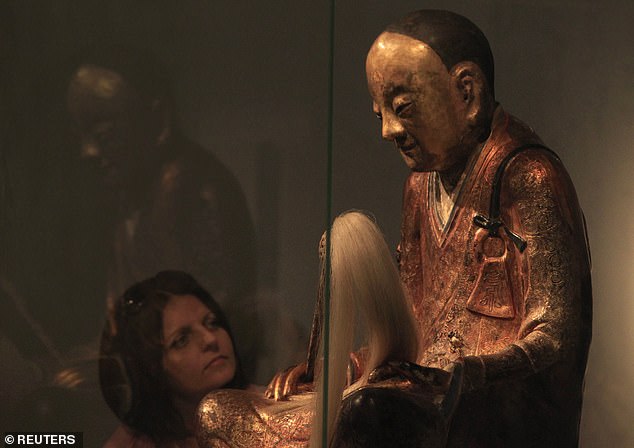 But Van Overeem again reiterated in court in October that he did not have the statue, which he said he exchanged in a swap with a Chinese collector in 2015.

He also furiously refuted Holthuis’ claims that he was in fact a dealer in Chinese art, and bought the statue in Hong Kong in 1996 – a known destination for stolen artefacts.

‘I’m an architect and a passionate collector. But I’m not a dealer,’ an angry Van Overeem said. He said he did not know where the statue was.

He accused Van Overeem and the statue’s new owner of ‘conspiring to make the Buddha mummy disappear to make sure that the claimants cannot take action.’