Early in the first episode of “Race for the Championship,” a new 10-episode documentary of the 2022 NASCAR season, the camera pans up to a high shelf in Kyle Larson’s garage. Tucked away up there is an unrecognizable, wadded-up hunk of metal and paint. That’s all that remains of the car Larson wrecked at Daytona in 2013; the other half of the car got splayed onto the track and into the stands.

The doc replays the wreck in shearing, shattering slo-mo, and even though you’ve just seen 2022 Kyle Larson, you exhale a tiny bit when 2013 Kyle Larson climbs out of the carnage shaken but unharmed.

“Crashing’s part of it,” Larson says, “so you move on quickly.” Maybe you do, Kyle. The rest of us would be quivering jelly for a month.

Yes, this is a stage-managed doc, but even through the gloss, you can spot the truth: NASCAR is a sport where legitimate danger still exists, even now. More than that, the danger is part of the allure. And now, it’s helpfully packaged in that most 2022 of formats: the prestige documentary.

Once, professional sports leagues touted their vast stadiums and their globally famous stars as proof of their success. Now, though, the real sign of status for a sport is whether they’ve got their own sleek reality TV series.

Blame Europe and Formula 1. “Drive To Survive,” the Netflix series spotlighting handsome, wealthy drivers piloting land-based rockets over some of the world’s most beautiful locales, hit on the perfect combination of action, drama and character. The result vaulted F1 to astounding levels of popularity, helping to bring two new races to the United States and driving up the broadcast rights fees to astronomical levels. As a result, pretty much every non-football sport is chasing that DTS magic.

Both tennis and golf have their own versions of “Drive To Survive” well underway, with both likely to air sometime early next year. This week, it’s NASCAR’s turn. “Race for the Championship” airs Thursday night at 10 p.m. on USA Network … and if that sort of specific-time, specific-channel phrasing seems a relic from a bygone era, well, we’ll get to that in a minute.

Get past the absolutely horrendous title – which sounds like somebody forgot to go back and make it, you know, interesting – and RFTC hits all the right DTS notes. It’s apparently a contractual requirement that every NASCAR production from “Days of Thunder” ‘til now begins with a shot of the sun rising over empty grandstands on race day. RFTC starts the same way, adding in voiceovers about the warrior spirit of NASCAR drivers … and damned if it doesn’t work.

On a purely visual level, NASCAR is a gorgeous sport. The paint schemes of the cars, the feel of a track at midday or sundown or under lights, the asphalt or concrete or dirt surfaces, the vibration of three dozen cars moving at 200 miles an hour, the chaotic ballet of pit stops, the postrace fireworks – it’s all ripe material for a docuseries, and RFTC wisely leans into this spectacle in its opening scenes.

RFTC isn’t meant for NASCAR hardcores; like DTS, the doc takes pains to lay out the defining characteristics of each driver, in terms NASCAR fans already know well. In the first episode, we spend time with 2021 champion Larson, 2018 champion Joey Logano, and Mexico’s Daniel Suarez, and each driver gets the requisite shorthand personality details. It will not surprise you to see one of these drivers just happens to win the 2022 Busch Clash, the race covered in this inaugural episode.

“Drive To Survive” wasn’t the first sports reality series; HBO’s “Hard Knocks,” for one, has been around forever. But DTS hit on the perfect alchemy of storytelling, drama, scenery and characters. The specific genius of DTS is that it transformed the perception of F1 completely, from one where the outcomes were all but predetermined into one where drama exists up and down the grid and throughout the paddock. (It also benefited from a global pandemic that kept us all indoors, but let’s not hope for any repeats of that.)

Tune in to F1 races on Sunday mornings and yes, Max Verstappen will almost surely win every time. But DTS fans will now watch and observe how, say, Lando Norris and Daniel Ricciardo are engaged in brotherly war, or how Mercedes head Toto Wolff would like to peel off the faces of officials who tilt in Verstappen’s favor. DTS taught novices how to watch a race, and the hope with RFTC, and the other DTS-esque docs, is that they’ll do the same for other sports.

“Race For The Championship” is an NBC production, and NBC is the network broadcasting the NASCAR playoffs, so you can see that there’s an obvious promotional motivation at work here. (Full disclosure: NBC and Yahoo Sports have a content-sharing partnership.) It’ll be interesting to see if RFTC hits on any of the existential challenges facing the sport – the aging fanbase, the declining ratings and attendance, the political minefields, the ongoing frustration many fans feel with the sport’s organizing body. There’s drama, and then there’s truth.

The doc’s biggest challenge – like anything else these days – is going to be getting eyeballs in the first place. It’s airing on USA – a network I don’t believe I’ve watched since “Burn Notice” back in the 2000s – and presumably on Peacock, too. DTS had the built-in advantage of being right there on Netflix. Tracking down USA is a much larger task for a shattered-attention-span population than just pushing a single button after the latest season of “Stranger Things” ends.

“Race for the Championship” premieres tonight. Just set your DVR to record it. Who sits down in front of the TV at a specific time for anything but sports anymore, anyway? 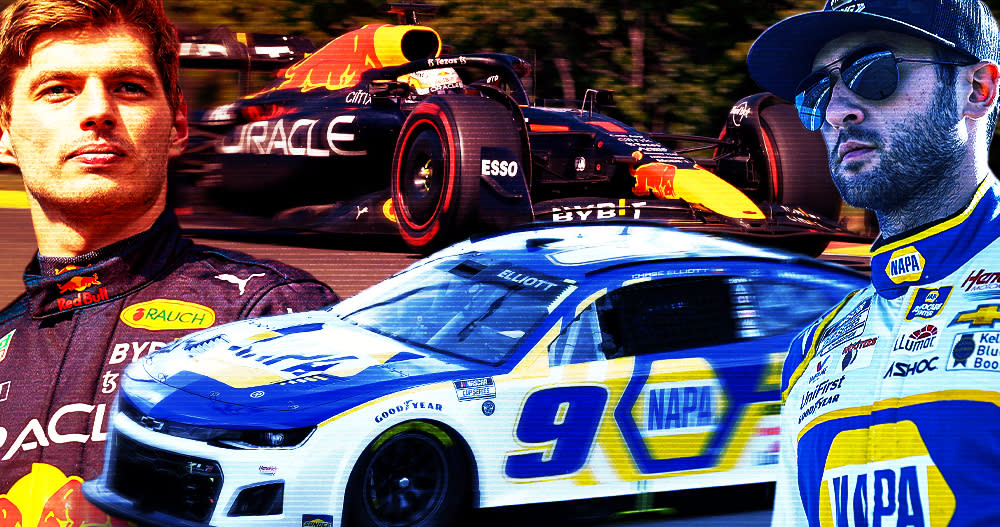