It is located in a ramshackle neighbourhood in the Congolese city of Bukavu, where a million people or more eke out a living on its downtrodden streets. But Dr Mukwege’s Panzi Hospital feels somewhat removed.

There is an air of generosity about this place which is personified on the faces of those who staff it and there is sense of quiet conviction in the manner of the man who founded it – an individual who has spent 20 years treating appalling injuries inflicted on women in the Democratic Republic of Congo.

“We can’t stand idly by while people just destroy our humanity,” says this year’s co-winner of the Nobel Peace Prize.

“Indifference creates consequences for you and for me. It is a kind of complicity. We have to stand up to it.”

As the son of a Pentecostal Church minister, Dr Mukwege soon realised there were limits to the power of prayer.

He says: “I started to follow my father, who was a pastor and I think something happened when he was taking care of a child who was sick, he just prayed but he didn’t give him medicines… I discovered there are things that my father couldn’t do and I said to him I will be a medical doctor.”

Dr Mukwege trained as a pediatrician but the casework took him by surprise.

“I found women who came to me to seek treatment, had been raped with extreme violence and I could not be indifferent,” he says.

“I just took the responsibility to start to treat them. I didn’t really go to school to learn how to do it.”

I asked: “There was no course, no medical degree to teach you?”

He replied: “I think what I saw, for the first time, even (though) I was a medical doctor, was so traumatising because it is not really something that you can learn.

“Can you imagine when people shoot in the genitals of woman? No one can teach you how to (treat) these types of things.”

We watched this self-taught surgeon sweep round the hospital, talking to patients and advising his staff. A typical day can involve five to six rape-related operations a day.

Dr Mukwege told me he can tell where a women or child comes from in this troubled country by the way she has been brutalised.

“What we discovered was that you would just know where they come from because of the (men) doing the torture. Some shoot in the genitals, (some) use bayonets or burn them or use sand and things like that. It was easy for us to know.”

In the post-operation ward, the beds are occupied by women who lie quietly on their backs. The smell of urine is pervasive.

The nature of his work is unrelenting and Dr Mukege has added political activism to his brief in a bid to change it.

“I treat a mother, after that I treat her (daughter) and the grandchildren. Should I stay in the operating room and wait for women to be treated? 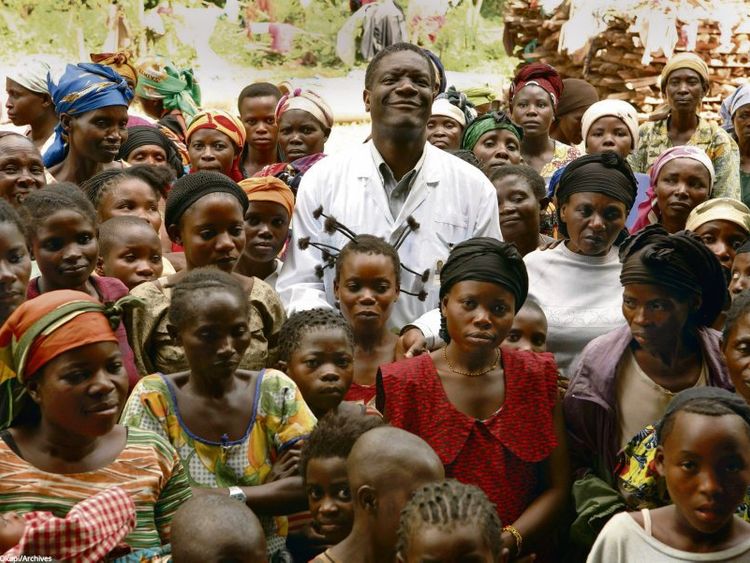 Dr Mukwege is using his standing in DR Congo to criticise rebel commanders, army soldiers and the country’s corrupt and impassive government.

But this activism can be dangerous. Dr Mukwege barely survived an assassination attempt in 2012 after he gave a fiery speech at the UN. Now, he requires 24-hour personal protection from a detachment of UN troops.

He said: “The pressure is there, of course, and you can see in the media, the fake news that they are doing each week, against me.

“But I think that this can’t stop us (talking) about what is going on in this country and you hope that one day the Congolese population can take more responsibility (for) their destiny.”

He for one, has taken responsibility by running a hospital that will not turn anyone away.

We met one of his patients as we were preparing to leave – a 12-year-old girl called Tina, who slipped her arm around the doctor and offered him a smile.

Tina is deaf – and she is also a new mother after she was raped last year. Dr Mukwege cared for her through the pregnancy.

Speaking with sadness, he said: “To be a mother at this age, it is terrible.

“How can you imagine that people can do things as they are doing. She didn’t get her childhood and now already she is herself a mother. Even though she doesn’t understand what happened to her.”

The Panzi Hospital is a place of healing amid unimaginable suffering and it is run by the rarest of individuals. A selfless man who has inspired the world.