Dominic Raab will today accuse China of ‘industrial scale’ human rights abuses against its Uighur Muslim minority as he hardens the UK’s rhetoric against Beijing.

The Foreign Secretary will use a speech to the UN to demand its investigators are allowed in to Xinjiang province, where the Communist regime has been accused of committing genocide.

His speech to the UN Human Rights Council this morning will also lash out at the regimes in Russia and Moscow, but it is his string criticism of China that will catch the eye.

Tory backbenchers are furious at ministers’ refusal to brand the actions of Xi Jinping’s autocratic state  as a ‘genocide’. And last night it was revealed by the Guardian that Boris Johnson himself told Chinese business leaders he was a ‘fervent Sinophile … whatever the occasional political difficulties’ at an event earlier this month.

The two nations are also in a stand-off over the repression of democracy in Hong Kong, the supposedly autonomous former British territory.

Mr Raab will tell the UN today that the actions of China against Mulsims in Xinjiany are ‘beyond the pale’.

‘The reported abuses – which include torture, forced labour and forced sterilisation of women – are extreme and they are extensive. They are taking place on an industrial scale,’ he will say.

‘UN mechanisms must respond. The UN High Commissioner for Human Rights, or another independent fact-finding expert, must – and I repeat must – be given urgent and unfettered access to Xinjiang.’

Mr Raab’s address to the 46th Session of the Council marks the UK’s return as a voting member. 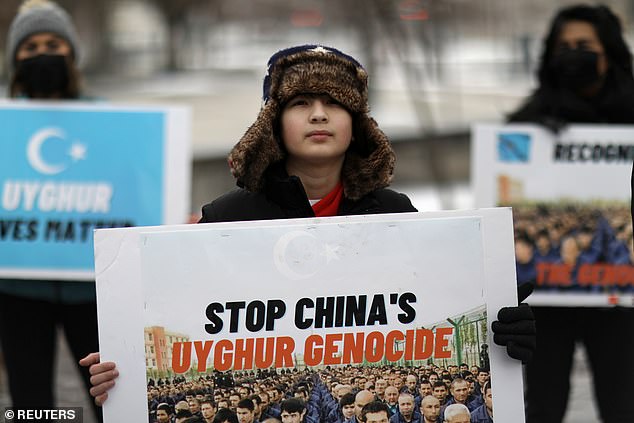 The Foreign Secretary will use a speech to the UN to demand its investigators are allowed in to Xinjiang province, where the Communist regime has been accused of committing genocide. 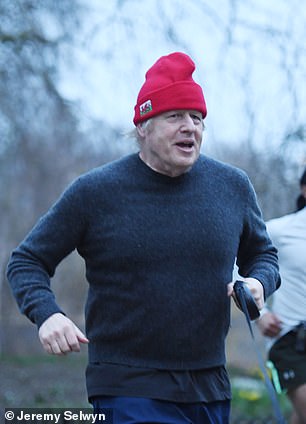 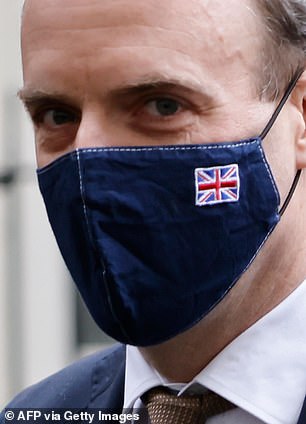 His speech to the UN Human Rights Council this morning will also lash out at the regimes in Russia and Moscow, but it is his string criticism of China that will catch the eye. Last night it was revealed that Boris Johnson himself told Chinese business leaders he was a ‘fervent Sinophile’ earlier this month.

He will also blast Vladimir Putin’s Russia over the detention of opposition leader Alexey Navalny, who was jailed last week having recovered from an attempt to poison him that has been blamed on Moscow.

‘We face a truly dire and shocking situation from a permanent member of the UN Security Council,’ he will say.

‘It is disgraceful that Alexey Navalny, himself the victim of a despicable crime, has now been sentenced on arbitrary charges.

‘His treatment and the violence inflicted on peaceful protesters can only further reinforce the world’s concerns that Russia is failing to meet its international obligations. 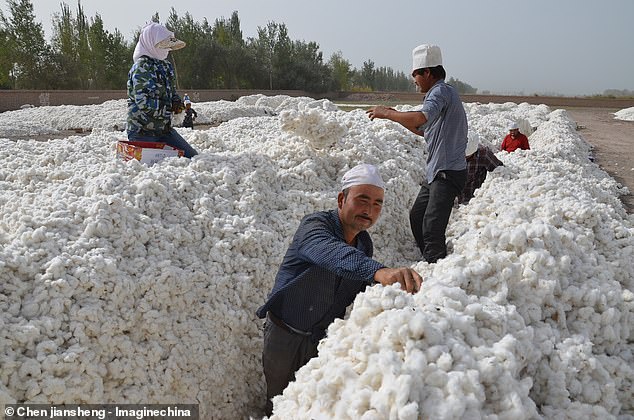 Members of the Uighur minority group have reportedly been made to pick cotton in Xinjiang province, leading to concerns British consumers could inadvertently be buying tainted goods 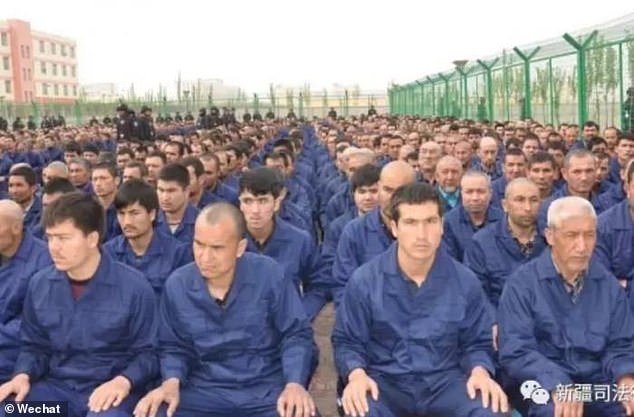 The Beijing government has been accused of widespread abuse in the area, home to the Muslim Uighurs, including allegations of forced sterilisation, slave labour and mass internment

‘We call on other members of the council to consider whether Russia’s actions are in line with its international human rights obligations and the values that we seek and that we have pledged to uphold.’

Mr Raab will call on the council to continue with a ‘comprehensive investigation’ of human rights violations – including accusations of torture, cruel, inhuman and degrading treatment – relating to the rigged presidential elections in Belarus.

He is set to say that president Alexander Lukashenko’s ‘brutal crackdown’ against protesters has resulted in a ‘human rights crisis’.

‘The UK will support initiatives to keep Belarus on the council’s agenda for as long as it is necessary, and until the Belarusian people are able to enjoy their democratic rights and their fundamental freedoms,’ Mr Raab will say.

He will also call on the United Nations to confront the military coup in Myanmar after more protesters were shot dead.

The Foreign Secretary will also urge the country’s army leadership to step aside in a speech to the UN’s Human Rights Council.

Yesterday he described the latest shootings in which two died as ‘beyond the pale’.

Britain has frozen the assets of three senior military officials while other sanctions are also in place.

The funeral of a protester drew thousands of demonstrators onto the streets of the country’s second biggest city.

Mya Thwet Thwet Khine, 19, was shot by police on February 9th. Her death was confirmed on Friday. 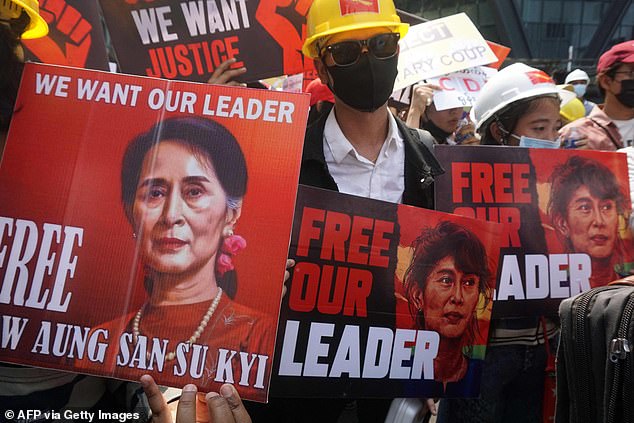 Two protesters were shot dead on Saturday – with 20 people hospitalised after the same incident.

Protests against the military dictatorship have spread across Myanmar amid growing concerns for the safety of those taking to the streets.

Mr Raab will say: ‘The position in Myanmar gets worse. The violations and abuses are well-documented, including arbitrary detention and draconian restrictions on freedom of expression. That crisis presents an increased risk to the Rohingya and other ethnic minorities.

‘The military must step aside. Civilian leaders must be released. And the democratic wishes of the people of Myanmar must be respected. That is why at this session we will again co-sponsor the resolution renewing the mandate of the Special Rapporteur on Myanmar, so he can continue his essential work.’

Yesterday Facebook announced that it had taken down the page run by the Myanmar military information unit. The Facebook ban came as the internet was shut down by the military for the seventh night in a row.