The 67-year-old was rushed to A&E after trapping his arm in machinery and severing his arm and forearm completely off. 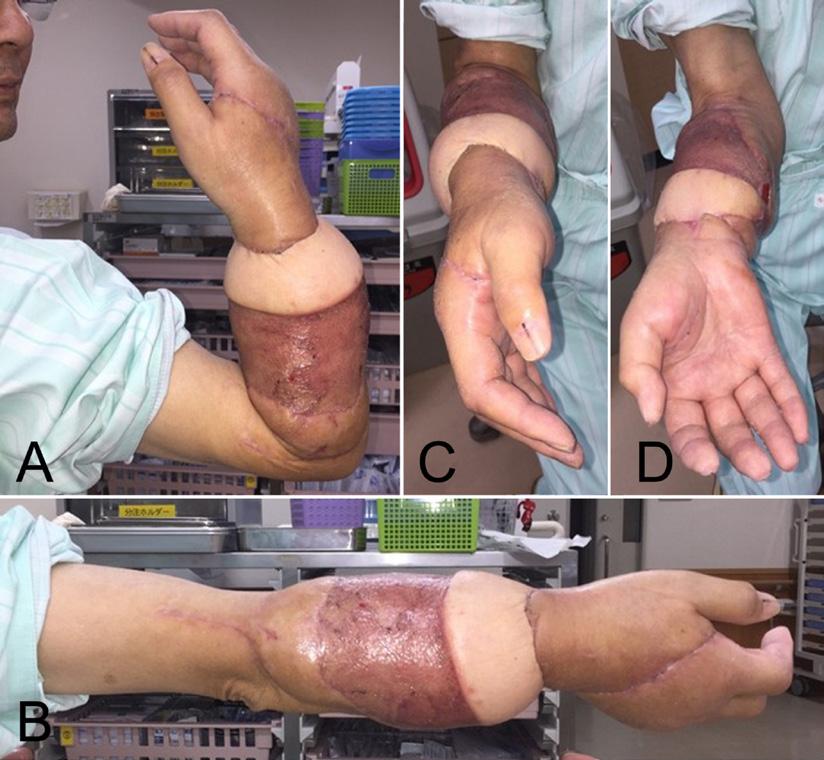 He was taken straight into the operating room where doctors worked to clean the crush wound, which was filled with tiny metal fragments from the machinery.

Medics then worked tirelessly to repair his blood vessels fit his bones with fixation points to reattach his forearm.

The nerves, muscles and tendons were stitched back together as his arm was reattached and his arm was placed in a vacuum tight dressing to help it heal.

Four days after the initial operation doctors were able to place skin and muscle grafts on the wound using tissue from tissue from his side.

He was making good progress so doctors were able to remove the vacuum dressing, known as negative pressure wound therapy, after 19 days.

The patient was barely able to move his arm at the elbow to begin with, but movement improved after physiotherapy.

He was transferred to a rehabilitation centre a month after surgery.

Ten months later the patient, from Japan, was still unable to use his hand and arm like he had used to, but his range of motion had improved.

Despite the poor functional ability, the patient was quite satisfied and appreciative, his doctor Dr Naoki Yoshida, of Shonan Kamakura General Hospital, wrote in the BMJ case report.

"Limb amputation causes not only loss of physical integrity but also affects an individual’s mental and social well-being and is a significant problem, especially for younger people and the working population," he wrote.

"The success rate for replantation after major upper extremity amputation is reported in 77 per cent –93 per cent [of cases].

"The success rate depends considerably on the grade of damage."

Dr Yoshida said many patients suffer long-term functionality problems after a limb is reattached, but find it easier to adapt to.

"Despite the significant progress of modern prosthetic devices, high rejection rates are still observed in most traumatic amputation patients," he added.

"Hence, arm replantation is still believed to be superior to an amputation stump fitted with an appropriate prosthesis."